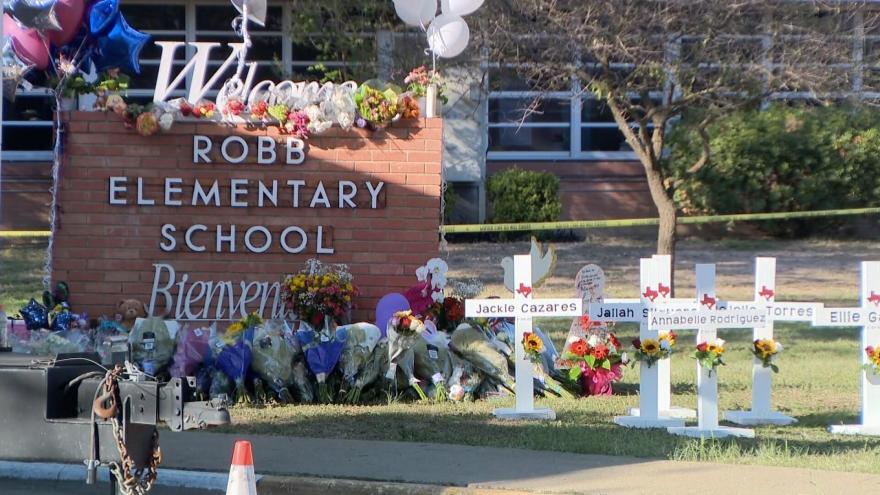 A memorial displaying the names of the 19 children and 2 teachers killed at Robb Elementary school in Uvalde, Texas.

(CNN) -- In his first extensive public comments about his actions during last month's Texas school massacre, the Uvalde school police chief has contradicted previous narratives about his role, telling the Texas Tribune he didn't consider himself the incident commander and did not instruct officers to refrain from breaching the scene.

Chief Pedro "Pete" Arredondo, who has faced widespread criticism for his role, portrayed a locked, jamb-reinforced classroom door as one of the main obstacles delaying the breach -- and the interview published Thursday adds another complication in officials' often-shifting and sometimes opposing narratives of how law enforcement officers responded to the gunman at Uvalde's Robb Elementary School on May 24.

"I didn't issue any orders," he told the Tribune, though the outlet reports the chief did instruct officers to start breaking the outside windows of other classrooms and begin evacuating students. "I called for assistance and asked for an extraction tool to open the door" of one of the classrooms where the shooting happened, he said.

Arredondo "assumed that some other officer or official had taken control of the larger response," the Tribune wrote. "He took on the role of a front-line responder."

The Tribune said it collected the chief's comments in a phone interview and in statements given through his attorney, George E. Hyde.

It adds to a pile of differing explanations officials have given about the police response at the school, where authorities say an 18-year-old man shot dead 19 fourth-graders and two teachers in two adjoining classrooms, and remained there for more than an hour until a Border Patrol tactical response team entered and shot him dead. During those 70-plus minutes, some kids were still alive and calling 911 for help; one student told CNN she smeared herself with her friend's blood and played dead.

Texas Department of Public Safety director Col. Steven McCraw had said May 27 the school police chief -- Arredondo -- was the incident commander, and the chief believed "there was time to retrieve the keys and wait for a tactical team with the equipment to go ahead and breach the door and take on the subject."

"From the benefit of hindsight where I'm sitting now, of course it was not the right decision," McCraw said last month about what he said was the supervisor's call not to confront the shooter. "It was the wrong decision. Period. There's no excuse for that."

Also Thursday, The New York Times reported while law enforcement decided how to breach the two classrooms, they were aware injured victims still were trapped inside with the shooter. The Times cited a transcript of law enforcement body camera footage included in investigative documents and videos from law enforcement reviewed by the Times.

Arredondo has not given a public information update or official statement since the day of the attack and declined to answer substantive questions posed by CNN last week, saying he would not release any information while victims' funerals were ongoing.

Arredondo's attorney, Hyde, texted CNN he and his client are not currently granting more interviews.

"My client needs some time as this has been very difficult for him. At this point we will not be granting any interviews immediately," Hyde told CNN by text.

Multiple investigations and legislative reviews have been launched after the attack, including by a Texas House investigative committee, but details of the massacre have still been slow to emerge.

What the reports reveal about the timeline

According to CNN's analysis of the timeline of events, three Uvalde Police Department officers entered the school at 11:35 a.m., just minutes after the shooter invaded the building. Arredondo also told the Tribune he arrived at the school around 11:35 a.m.

Arredondo told the Tribune he left his two radios outside the school because he wanted his hands free to hold his gun. He thought they would slow him down because of a faulty clip and an antenna which might hit him as he ran, the Tribune reported.

Once the chief and a group of Uvalde officers approached the doors to the adjoining classrooms where the shooter had entered, they found the doors were locked, Arredondo told the Tribune. The gunman then fired shots from inside the classroom that penetrated the classroom door and wall, grazing some of the Uvalde police officers and lodging into the wall next to the hallway where there were other classrooms, according to the report.

Because the classroom door was reinforced with a steel jamb, officers were unable to kick the door in, Arredondo told the Tribune. The chief said he used his cellphone to call police dispatch and asked for a SWAT team, snipers and tools to open the door.

It's unclear at what time Arredondo made the request or ordered officers to begin evacuating students, but CNN has previously reported at about 11:44 a.m. officers were calling for additional equipment, body armor and negotiators, and evacuating students and teachers.

At that time, a student trapped inside one of the besieged classrooms called 911 identifying herself and the classroom she was in. She called two more times several minutes later, telling dispatchers eight to nine students were still alive, according to authorities. Arredondo told the Tribune he was not aware of the 911 calls because he did not have his radios and says no one relayed them to him.

Nevertheless, the Times has reported, officers on scene knew injured people were inside. The paper previously reported slain teacher Eva Mireles had called her husband -- a Uvalde school police officer -- to tell him she was injured and dying.

At some point, the Tribune reports, a janitor provided six keys that were unable to open the door and another key ring with as many as 30 keys was brought to the chief later, but those were unsuccessful as well. It's unclear at what time Arredondo received the keys.

The Times reports at around 12:30 p.m., Arredondo said, "We're ready to breach, but that door is locked," citing a transcript.

"Whoever is in charge will determine that," another officer responds, according to the Times.

At 12:50 p.m., a tactical team breached the classrooms using a key from a janitor and fatally shot the gunman, CNN has reported.

Arredondo says reinforced door dictated they wait for way to open it, and he didn't order anyone not to breach

McCraw, the Texas DPS director, had told reporters May 27 Arredondo had believed the scene had become a "barricaded subject situation" and not an active shooter situation, and it was part of why he said the chief decided not to breach the classroom.

Arredondo told the Tribune he did believe the situation had changed from that of an active shooter to that of a barricaded gunman. But, he said, because of the locked, reinforced door, officers couldn't kick their way in and had little option left but to call for help and wait for other methods to enter.

And, he said, he didn't order anyone not to breach, according to the Tribune.

His attorney, Hyde, also told the Tribune Arredondo did not issue any orders to other law enforcement agencies.

On Friday, one of the members of the Texas legislative committee investigating the shooting acknowledged there were conflicting public reports about whether Arredondo was in charge and whether he kept officers from confronting the gunman.

"Some of the tasks that we're going to have ... (will be) to understand what the norm is in those situations, how those decisions are made. And then (we'll) make our report public when our investigation is concluded," Democratic state Rep. Joe Moody told "CNN Newsroom."

"There's confidential information we're going to have access to. So our goal is to ... survey all of that, and my hope is that we get to talk to Chief Arredondo when we visit Uvalde in the coming weeks, so that we can hear everything and understand everything and compare those statements to the objective evidence that we have," Moody said.

DPS said on May 31 Arredondo had not responded to a request for a follow-up interview with the Texas Rangers, who are investigating the massacre. The next day, Arredondo told CNN, "I am in contact with DPS every day."

Arredondo's attorney told the Tribune the chief participated in multiple interviews and follow-up calls with DPS in the days following the shooting and also briefed Texas Gov. Greg Abbott and other state officials.

But after the DPS director alleged on May 27 Arredondo made the wrong decision, Arredondo "no longer participated in the investigation to avoid media interference," Hyde said.

In a statement responding to the Times report, Abbott's press secretary Renae Eze said, "The investigations being conducted by the Texas Rangers and the FBI are ongoing, and we look forward to the full results being shared with the victims' families and the public, who deserve the full truth of what happened that tragic day."

CNN has reached out to DPS and the Uvalde Consolidated Independent School District for comment. CNN has also reached out for comment to The National Incident Management System, which guides all levels of government on how to respond to mass emergency events.

On Thursday, the Texas House investigative committee held its first hearing in its probe into the Robb Elementary shooting.

The panel may release its preliminary findings before the full probe is complete, Republican state Rep. Dustin Burrows, the committee chairman, said in the panel's opening remarks. The preliminary report is expected to be complete by the end of the month, a source close to the committee told CNN.

Burrows, along with the two other committee members -- Moody and former Texas Supreme Court Justice Eva Guzman -- heard private testimony from top Texas Department of Public Safety officials Thursday, including from McCraw, according to a witness list provided by the committee.

Both Moody and Burrows declined to share details about Thursday's closed-door session. When asked how it felt reviewing the evidence, Moody told CNN Thursday, "Like every other parent in this state, I'm sad. I'm scared. I'm shocked."

The committee will have two days of hearings next week, where they'll hear from witnesses behind closed doors. A public notice of the hearings did not list the specific witnesses but noted the panel will hear "invited testimony from law enforcement authorities and other affected parties related to" the attack.

State and local agencies are also conducting investigations into the massacre and law enforcement response, though residents and officials alike have become frustrated with the apparent lack of transparency and cooperation.

"It's clear that the state and local officials now are not cooperating with each other," US Rep. Joaquin Castro, a Texas Democrat, told CNN Saturday, noting he's asked the FBI to take the full lead on the investigation.

The US Department of Justice will also conduct a federal review of the law enforcement response at the request of Uvalde Mayor Don McLaughlin, the agency announced last week.