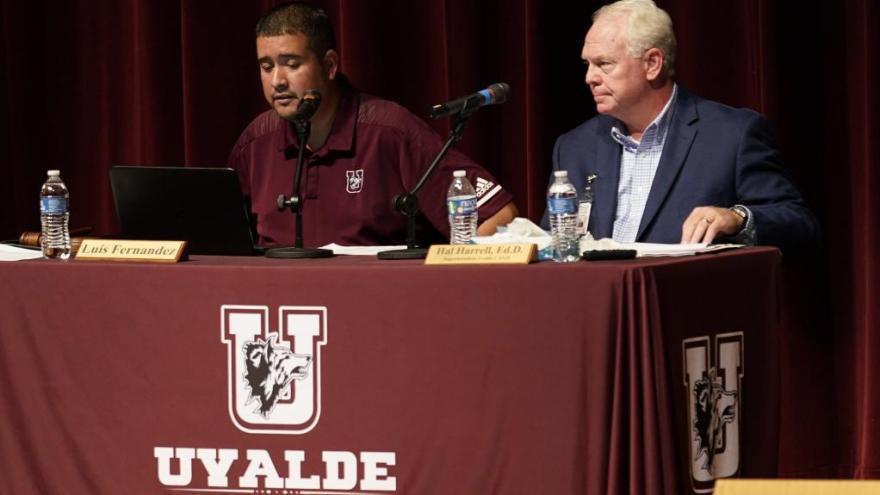 The new measures include hiring 10 additional police officers for its school campuses, adding metal detectors, and identifying one point of entry for each school before students return on September 6, Superintendent Hal Harrell said during a two-hour public meeting. At the time of the shooting, only five officers were employed by the district, according to the Texas House Committee interim report on the shooting.

Also Monday, Robb Elementary Principal Mandy Gutierrez was placed on administrative leave with pay, according to her attorney, Ricardo Cedillo. The board didn't comment on her leave at the meeting.

Parents and other community members at the meeting expressed frustration about what they called a lack of transparency on the part of the board over what will be done to make their children feel safe going back to school.

At one point, some community members walked out as a woman started to say she supported the school district during a public comment period.

The Uvalde massacre was America's deadliest school shooting since 2012, and questions have mounted over the delayed police response.

In a hearing before the Texas Senate last month, Texas Department of Public Safety Director Col. Steven McCraw called the police response an "abject failure." He placed sole blame for the failure to engage the gunman on school district police chief Pedro "Pete" Arredondo, who officials have identified as the on-scene commander and who "decided to place the lives of officers before the lives of children," McCraw said.

Video from body-worn camera videos from officers at the mass shooting show Arredondo at the center of the police response: giving orders, conveying and receiving information, and officers deferring to his position when confused over their roles or response to the shooting.

Yet a preliminary report from a Texas House investigative committee said state and federal officers on scene also share responsibility in what was described as "an overall lackadaisical approach." Body camera footage shows at least one trooper from Texas DPS at one of the school's entrances minutes before previously thought.

Arredondo is currently on unpaid administrative leave, and the meeting to vote on his possible termination has been postponed to a later date. Arredondo has previously said that he did not consider himself to be incident commander that day.

In body camera video revealed last week, at least one trooper from Texas DPS was present at Robb Elementary about five minutes earlier than previously known.

It was initially believed that one DPS trooper had arrived at the scene at 11:42 a.m., or 9 minutes after the gunman entered the school, according to testimony and timelines provided by McCraw.

It was not until 12:50 p.m. that Border Patrol tactical officers breached the classroom door and killed the gunman.

DPS spokesperson Travis Considine told CNN in a statement Monday that McCraw's testimony regarding when a trooper entered the school hallway was accurate and "the times the Director testified as Troopers entering the building have not changed."

McCraw "testified there was a sufficient number of officers and equipment on scene at 11:36 a.m. to neutralize the subject. In his testimony he was the first to illustrate how the law enforcement response was an abject failure because a decision was made to treat the subject as a barricaded subject and not an active shooter," Considine said.