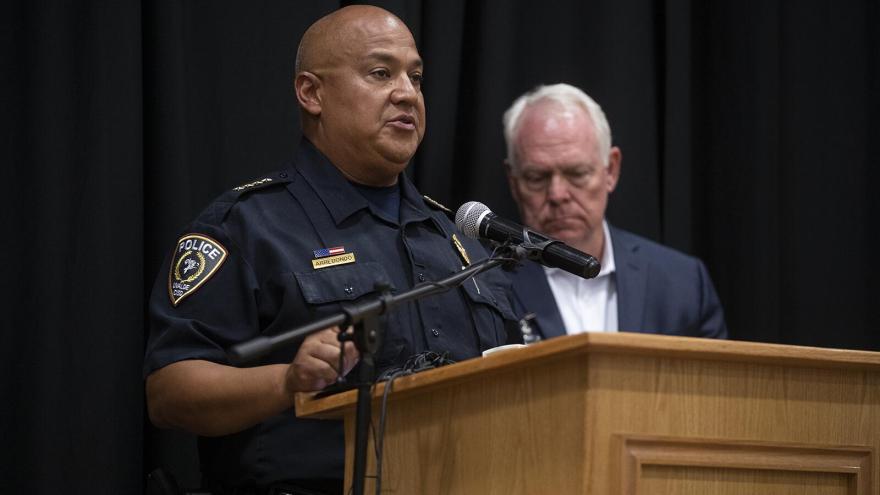 (CNN) -- The Uvalde Consolidated Independent School District is searching for an interim police chief as Chief Pete Arredondo is on unpaid leave while he awaits a termination hearing, school board Superintendent Hal Harrell said Monday.

"We continue to search and talk to different organizations about an interim police chief or an interim team," Harrell said in a public meeting Monday evening. "There have been four officers who have been recommended for hire. They are all from out of town and they look like very promising candidates, lots of years of experience. So we will continue on that progress as well."

The board's search was previously reported by the online newspaper Uvalde Hesperian, citing comments given by school board President Luis Fernandez at a Rotary Club meeting last week.

Arredondo was placed on unpaid leave following his highly criticized handling of the massacre at Robb Elementary School in May, in which 19 children and two teachers were killed. Officials have said Arredondo was the on-scene commander during the shooting, but the chief has disputed this, saying he did not believe he was in charge.

The Uvalde superintendent recommended Arredondo be fired in the wake of the tragedy and amid growing anger from residents and families who demanded the chief be terminated from the position.

The school board has postponed Arredondo's termination hearing twice because of requests from his attorney involving his right to due process. Most recently, the board pushed off the meeting due to a "scheduling conflict" which prevented the hearing from being held on August 4, the district said. A new hearing date was not set at the time.

Harrell also provided updates on safety measures being implemented for the new school year, including at least 500 cameras to be purchased for the district, designated points of entry for parents and visitors and the continued installation of fences, although it's not clear if the fences will be completed by the first day of school.

The school district recently completed a wifi audit to see what needs to be strengthened and is also in the process of getting an estimate for security film and glass, Harrell said. He said the school district has spent approximately $4.5 million on security and community support this summer, which was from a variety of funding resources.

The Texas Department of Public Safety has officially agreed to have 33 officers assigned to Uvalde school campuses and will remain there throughout the school year, Harrell said. He added that each officer will be assigned to a designated campus.

"We know going back to school will be especially challenging for many in Uvalde," DPS Director Steven McCraw said in a release about the additional officers. "The Texas Department of Public Safety is committed to working with the Uvalde Consolidated Independent School District to ensure each child, parent, and teacher feels safe and protected during this difficult time. There is no task more important than this."

Harrell also announced that there will be an option to attend school virtually in the upcoming year.

Uvalde parent, Adam Martinez, said he will likely keep his two children in virtual learning, saying that even though some of the security measures are reassuring, his son said that an increased number of officers doesn't make him feel safer because he believes officers didn't help during the massacre.

"As of right now, we'll just continue virtual and see if somehow we can change the perception of the school officers or the police officers in general because right now, it seems like the children don't have any confidence. They are going to school scared," Martinez told CNN.

Martinez said he is one of the parents helping to file grievances against the school board, Harrell and other school staff. So far, they've filed at least six complaints and want Harrell removed, he said.

Fernandez confirmed the school district has zeroed in on a property to replace Robb Elementary, which the district has said students will not return to, according to the Uvalde Hesperian report.

Additionally, Fernandez said the district will approach fire drills differently, using the intercom system instead of sirens, the paper reported.

CNN has reached out to the school district and the Texas Department of Public Safety for confirmation and comment, and has not immediately heard back.

Following the massacre, a report from a Texas House Investigative Committee identified widespread failures across responding law enforcement agencies during the shooting. The report also concluded Arredondo failed to assume his responsibility as the on-scene commander during the incident.

Responding officers arrived at the school within minutes of the shooter entering the building on May 24, but it took more than an hour for law enforcement to enter the adjoining classrooms and kill the gunman, according to a timeline from the Texas Department of Public Safety (DPS).

"At Robb Elementary, law enforcement responders failed to adhere to their active shooter training, and they failed to prioritize saving the lives of innocent victims over their own safety," the report said, adding, "The void of leadership could have contributed to the loss of life as injured victims waited over an hour for help, and the attacker continued to sporadically fire his weapon."

Arredondo has resisted officials' statements identifying him as the leading officer, saying he "was responding as a police officer" and did not consider himself to be in charge.

However, video footage from body-worn cameras and security cameras shows officers on the scene deferring to Arredondo when they are unsure of their role during the shooting and also shows Arredondo giving orders and coordinating personnel, according to a CNN analysis of the footage.