Uvalde parents call for school board to fire district's police chief: 'Why the hell does he still have a job with y'all?' 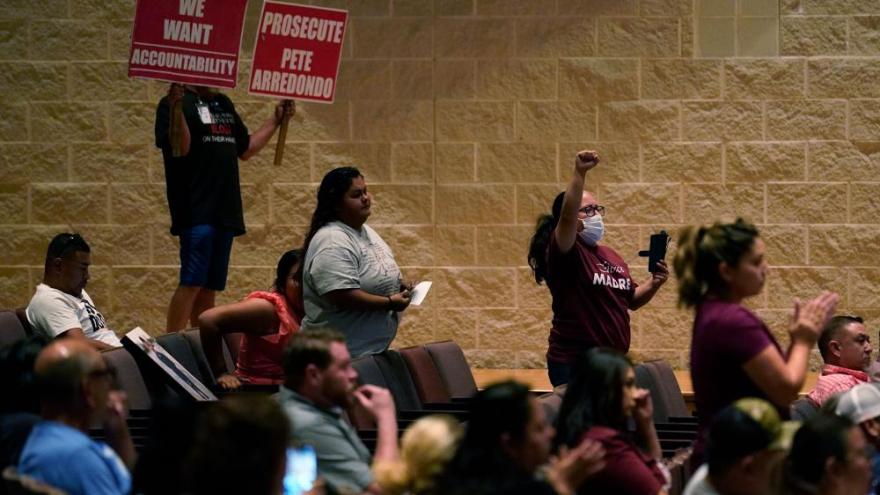 Parents and family attend a special meeting of the Board of Trustees of Uvalde Consolidated Independent School District where parents addressed last months' shootings at Robb Elementary School, Monday, July 18, 2022, in Uvalde, Texas.

(CNN) -- Angry residents of the emotionally shattered Texas town of Uvalde confronted the school board Monday night with speakers calling for district police chief Pedro "Pete" Arredondo to be fired and asking what safety measures will be put in place when schools reopen.

The grief from the May 24 shooting in which 21 people were killed at Robb Elementary was clearly weighing heavily on the attendees and some parents said their children aren't ready to return to class.

"There is an anxiousness in my heart that is only worsened by the fear my children have," said Rachel Martinez, a parent of four children. "I think no one person here today can deny there was a massive failure on May 24. Where these failures lie is the question."

Monday's meeting of the Uvalde Consolidated Independent School District board came one day after a Texas House investigative committee released a preliminary report outlining a series of failures by law enforcement agencies in their response to the shooting.

The 77-page "interim report" described "an overall lackadaisical approach" by nearly 400 local, state and federal law enforcement officers who went to the school as the second-deadliest shooting ever at a K-12 school in the United States happened.

State authorities have said Arredondo was the incident commander and have blamed him for the disastrous law enforcement response, which has been heavily criticized in part because it took authorities more than an hour to breach the classroom and kill the gunman.

But Arredondo, in an interview with the Texas Tribune last month, said he did not consider himself the incident commander.

Regardless, a lack of incident command was a key contributor to the disastrous law enforcement response, the report found, noting that others could have assumed control.

The report comes after finger-pointing from law enforcement agencies, as well as local officials decrying a lack of transparency and victims' families learning on a piecemeal basis what more could have been done to save their loved ones.

Attendees Monday night were pointing fingers at the board at a meeting that lasted three hours.

Parent Brett Cross asked the board why Arredondo, who is on administrative leave, hasn't been fired, demanding, "Why the hell does he still have a job with y'all?"

"If he's not fired by noon tomorrow, then I want your resignation and every single one of you board members," he said, "because you all do not give a damn about our children or us. Stand with us or against us, because we ain't going nowhere."

The board will make a decision on Arredondo's employment in a closed session, District Superintendent Hal Harrell said, adding it was waiting for the report and its findings, which will be taken into consideration.

Several other speakers also demanded the board terminate Arredondo.

Tina Quintanilla-Taylor introduced her daughter Mehle, who told the board she was wearing the same dress she wore to school on May 24.

"This was the last dress that all my friends saw me on (sic)," she said. "Most of those kids were my friends ... And I don't want to go to your guys' school if you don't have protection."

Martinez asked the board whether it was going to take responsibility for the failures of May 24.

"Are you going to make this right?" she asked.

She wondered what options students and parents would have if they don't want to go back to school, saying her daughter had said she was "so terrified" about going back to class.

"I can assure you that my children are not mentally prepared to return to campus and my husband and I are unwilling to send them. I speak for my children but I also speak for the rest of the parents in the community who feel the same as I."

Jazmin Cazares, the sister of shooting victim Jackie Cazares and a high school student, said there was nothing that could be done to bring her sister back but the school board could make changes to prevent other families from losing children. She also questioned how safe she could feel.

Asked whether the district would consider online learning, Harrell said it was under discussion. "We are looking into it. And there are some structures that have to be in place. But yes, we are looking at it and that is one of the things we are considering."

The school board also has recommended a delay to the start of the school year to address security issues such as door locks.

Some parents are opting to not send their children back. Angel Garza, father of victim Amerie Jo Garza, said his son will not be returning, but will be homeschooled.

"It's hard for any parent to sit here and trust these people that they can drop their kid off at school in the morning and they're going to be there to pick them up when they get out of work," he told CNN.

In June, Harrell announced that no students will ever return to the site of the massacre.

"We're not going back to that campus," Harrell said during a special meeting of the board of trustees, and added he expects to have a new address for the school in the "very near future."

"Our kids, our staff, we're not going back."