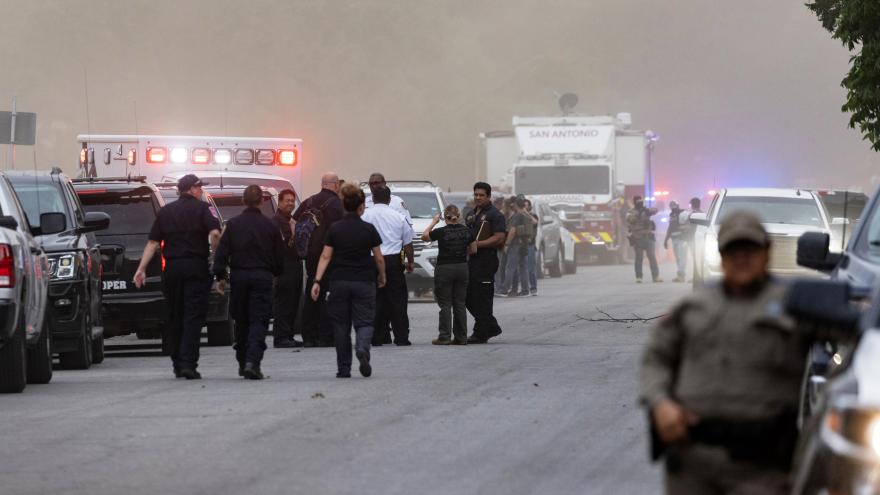 (CNN) -- The mayor of the Texas city of Uvalde is refuting a new assessment of the law enforcement response to the massacre at Robb Elementary School, saying the report "does not give a complete and accurate account of what happened."

Mayor Don McLaughlin on Thursday took issue with the first part of a report by the Advanced Law Enforcement Rapid Response Training (ALERRT) Center, which said an Uvalde police officer with a rifle spotted the gunman outside the school, but a supervisor either did not hear him or responded too late when asked for permission to fire.

"No Uvalde police department officer saw the shooter on May 24 prior to him entering the school," McLaughlin said in a statement. "No Uvalde police officers had any opportunity to take a shot at the gunman."

The gunman eventually killed 19 young students and two teachers inside a classroom before authorities eventually breached the classroom more than an hour later.

The pain surrounding the tragedy has been compounded by finger-pointing and blame-shifting from the various agencies investigating the school shooting and its aftermath.

On Friday, the chairman of the Texas House Investigative Committee looking into the shooting, Dustin Burrows, tweeted that the state Department of Public Safety (DPS) had denied a committee request to include in its report a 77-minute video of the hallway outside the school classroom before it was breached.

The footage does not show the victims nor the shooting, according to Burrows.

"DPS believes that the video is likely to bring clarity to the public regarding the tragic events in Uvalde," DPS said in its response to the request.

"We do not believe its public release would harm our investigative efforts. In fact, releasing this video would assist us in providing as much transparency as possible to the public without interfering with the investigation in the manner that an immediate public release of all evidence would."

But the agency said Mitchell-Busbee "objected to releasing the video and has instructed us not to do so."

"As the individual with authority to consider whether any criminal prosecution should result from the events in Uvalde, we are guided by her professional judgment regarding the potential impact of releasing the video," DPS said.

This week's report by the active shooter and attack response training center at Texas State University cited a series of deadly missed opportunities and mistakes in the response, including two unlocked school doors and a lack of effective command.

"A Uvalde Police Department officer saw someone outside, but was unsure of who he saw and observed children in the area as well," the mayor said in his response to the report. "Ultimately, it was a coach with children on the playground, not the shooter."

McLaughlin said that, contrary to the report and a DPS timeline, troopers were at the school door about three minutes after the shooter entered and dozens more at the time of the breach.

The mayor called "the premature release of piecemeal information" about the investigation a "disservice" to the victims' families and vowed to release all city records once reviews are complete.

ALERRT said the document should not be taken as a "definitive or final report as all investigatory options have not been exhausted."

In a statement, Texas Lt. Gov. Dan Patrick said the report corroborates earlier testimony from Texas Department of Public Safety Director Col. Steven McCraw and added the assessment was "very difficult for me to read."

There will also be reports from the FBI, the Texas Rangers and the District Attorney in the "coming weeks and months," Patrick said.