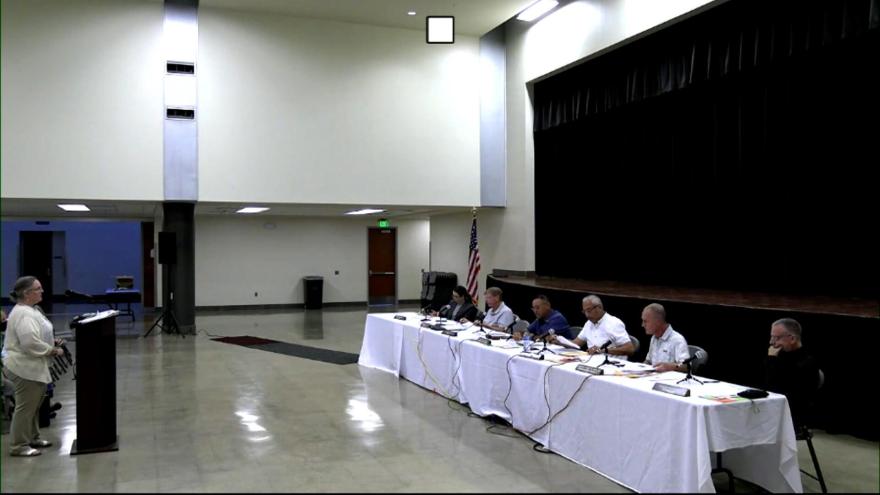 The Uvalde City Council vowed Tuesday to investigate every city police officer who responded to the massacre at the Robb Elementary School in May.

(CNN) -- The Uvalde City Council vowed Tuesday to investigate every city police officer who responded to the massacre at the Robb Elementary School in May.

"This investigation is looking at every single officer and what his actions -- what he did, what our policy says -- and basically, we're gonna get a report on everybody," council member Ernest "Chip" King III said, adding, "we will act on it, and we promise that to you."

Uvalde police officers who responded to the scene will be interviewed by the council's appointed lead investigator, Jesse Prado, a former Austin police detective, King said.

"He's gonna be conducting the investigation and we're gonna let the investigation go, see what he determines, but everybody that's Uvalde PD that was there will be held accountable for their actions," he said.

"We owe it to, to the families. We want to get it right," another council member, Everardo "Lalo" Zamora, said, alluding to the heartbreak suffered by the Texas community since the assault that left 19 students and two teachers dead.

The law enforcement response to the massacre, the second deadliest at a US K-12 school, has been widely criticized due to the 80-minute delay between when the first shots were fired and the gunman was finally killed.

Uvalde police officers were some of the first law enforcement personnel to arrive at the school where a gunman fired at people outside, entered the school through a side door and went into a classroom where he fired more than 100 bullets.

In all, almost 400 officers from two dozen agencies responded to the shooting on May 24.

The Uvalde Police Department has 39 sworn officers, officials said Tuesday. Twenty-five of them went to the shooting scene, according to a report from a Texas House investigative committee.

The city has already placed a lieutenant, who was the police department's acting chief that day, on administrative leave while it determines whether he should have assumed command.

The state's Department of Public Safety is leading a criminal investigation into the shooting.

Two reviews of the response so far -- by the Texas House investigative committee and the Advanced Law Enforcement Rapid Response Training Center at Texas State University -- have faulted school district police chief Pedro "Pete" Arredondo, though neither of those reports is considered a complete accounting of the day and its failures. The investigative committee also pointed to the broad failures by the various law enforcement agencies that responded to the scene.

Arredondo told the House investigative committee that he did not "consider himself to have assumed incident command," according to the legislative report -- which quoted the chief as saying, "My approach and thought was responding as a police officer. And so I didn't title myself."

The chief is on administrative leave and the school district superintendent has recommended he be fired. A school board meeting to vote on his dismissal was canceled following the request of the chief's attorney, officials have said.

Calls for officers to be taken off patrol

Some people at the city council meeting called for city officers who went to the school to be placed on leave or be assigned desk duties.

"I know parents want answers. Nobody wants to give those answers more than I do on the city council," Uvalde City Council member Hector R. Luevano said during a public portion of Tuesday's council meeting.

"I'm a former police officer, so I have some insight into actions that need to be taken," he added. "I can assure the families in this community that I'm going to do everything within my power as a member of this council to give you the answers that you need to hear," he said.

"If there's any officer that's in violation of any policy or procedure that they needed to act on and did not and might have caused these children to die, these teachers to die, I can assure you, heads are going to roll," Luevano said.

Council members said their investigator should finish his work within two months, then Prado will make recommendations -- possibly including disciplinary actions -- to the council.

The council, as the school board did the night before, passed a resolution requesting Gov. Greg Abbott calls a special session of the state Legislature to consider raising the minimum age for buying a semi-automatic, military-style rifle.

The Uvalde gunman purchased two AR-15-style rifles for his 18th birthday. He used one in the massacre.

Luevano said it is likely the governor will ignore the requests and cited Abbott's connection with the National Rifle Association, noting that it had funded his campaign.

"So is this special session going to happen? I think not," he said. "And why do we need to ask for a special session? Why doesn't he take the initiative?"

"I don't even think he cares about Uvalde," Luevano added.