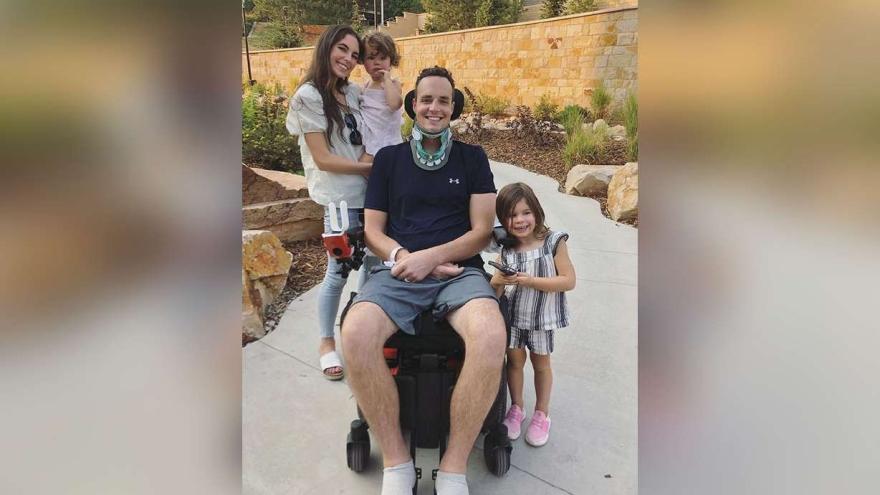 ALPINE (KSL) -- What was supposed to be a day of celebration quickly turned into a day of uncertainty after Spencer Brown hit his head at the bottom of the pool.

Family was gathered to celebrate his recent graduation from NYU with a pool party on July 29, 2021. He and his wife had just announced their third baby was on the way. Spencer had a slice of cake to eat before jumping off the diving board, head first.

"I can remember hitting my head and thinking, 'Okay, it's time to swim to get out,'" he said. "My brain was sending the signals, but nothing moved."

Ellis Brown did not see the dive, but recalls seeing her husband floating face down in the pool.

"I heard my dad yelling his name over and over again. I looked in the pool and I just knew something was wrong," she said.

She jumped into the pool and got her husband's head above water to help him breathe. Other family members quickly jumped in to help her. A cousin, who is studying to become a neurosurgeon, told the group to keep Spencer Brown floating on his back in the water to prevent further injury as they waited for paramedics to arrive.

"I would have never thought to do that. I would assume to get someone on to a hard, flat surface in case they needed CPR," Ellis Brown said. "But I'm so glad we listened, otherwise we probably would have done further damage to Spencer's neck."

He was rushed to the hospital where an MRI confirmed a C3-C6 spinal cord injury, one that typically impacts a person's airways. Doctors told the couple a majority of people with this injury die almost immediately. The couple considers this case a miracle.

"We were so close to losing him," Ellis Brown said. "We are just so grateful everything happened the way it did."

After a week in the ICU and three months in therapy, Spencer Brown is defying all odds and walking slowly with crutches.

"I will most likely never be back to normal," Spencer Brown said. "This is my new body that I've adopted and you just hope and pray that more and more comes each day."

The couple's mission is to now remind others to be careful in the water. They encourage anyone swimming this summer to have a designated lifeguard at family parties.

"You can rotate someone every 20 minutes. Have them wear a bright-colored piece of clothing so that people know not to distract them when they are on shift," Ellis Brown said. "Also, have a basket nearby with a fully charged phone in case someone needs to call 911."

They suggest having two adults in or near the water in case of an emergency. If one adult starts drowning, they say you can't count on kids to save you.

"If I would have done the same dive and been left there in the pool, my two young daughters, they would have found me dead in the water," Spencer Brown said.

The couple hopes their message prevents an injury like this from happening to someone else.

"The things that you think are never going to happen to you sometimes end up becoming your new reality," Ellis Brown said.