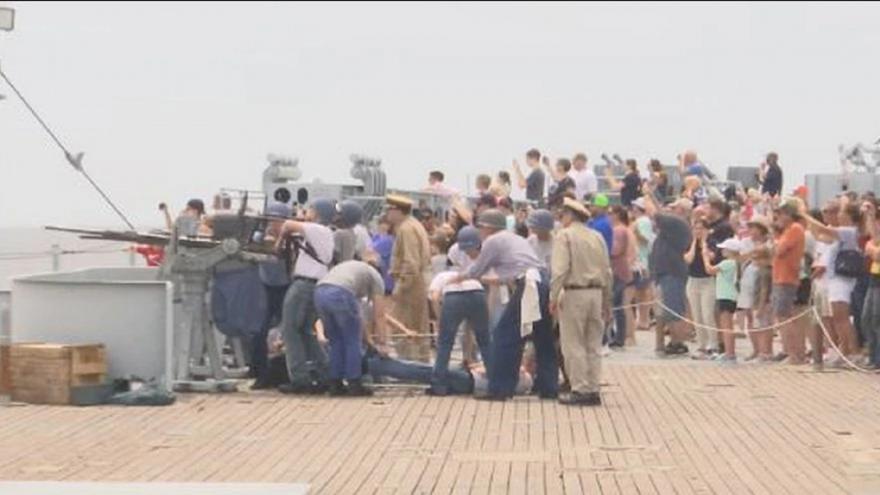 MOBILE, Alabama (WALA) -- It was a scene out of World War II -- playing out Saturday afternoon -- on the USS Alabama.

A love of preserving the past -- inspires the Battleship’s Living History Crew to put on the reenactments of the sacrifice of the Greatest Generation.

“We’re trying to carry on their stories -- stories that they told us. Stories my father’s generation told me. And we are trying to pass those down and preserve our naval heritage and a little bit of our history, which is slowly fading from the scene,” said Peter Cash, Captain of Battleship Alabama Living History Crew.

Planes, guns, and casualties -- a crew of about 50 volunteers put on the show.

Howard is also active military -- and will tell you this is about as real as it gets.

“I would encourage folks to come out and see this mainly because it’s a Living History Crew -- you get to interact with the sailors, talk to the marines and get to see... A small sliver of the life the men and women before us got to live,” explained Howard.

Ben Erickson and his wife had a front row seat. While the couple has a yearly membership pass to the park -- this is their first reenactment.

“I’ve not been able to see a plane dive-bombing a ship up close like that. I don’t know anywhere else in the world you’re going to be able to see a re-enactment with them coming in as close as they did and taking off like they were. Very cool,” said Erickson.

A one-of-a-kind perspective aboard the “Mighty A” -- highlighting the historic ship that calls the Port City home.

“Again, the Alabama is unique in that respect because she served only a couple of years after WWII and then was essentially moth-balled intact with all of her machinery in place. So we actually have more of the original equipment -- machines in the machine shop or tools in the tool room than most other museum ships do. So we’re extremely fortunate,” explained Cash.

The USS Alabama’s Living History Crew puts on their reenactments every two months.