USPS to slow down some mail delivery starting Friday 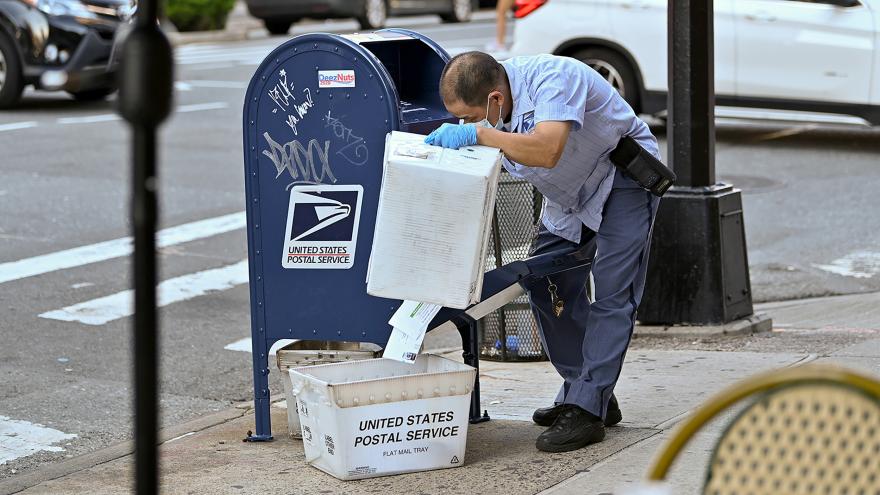 The changes, which include longer first-class mail delivery times and cuts to post office hours, are part of embattled Postmaster General Louis DeJoy's 10-year plan for the agency that he unveiled earlier this year.

According to USPS spokeswoman Kim Frum, the service changes won't affect about 60% of first-class mail and nearly all periodicals. Within a local area, standard delivery time for single-piece, first-class mail will remain at two days.

However, mail traveling longer distances will take longer to arrive in some cases, due to the USPS increasing transit time.

"These changes would position us to leverage more cost-effective means to transport First-Class packages via ground rather than using costly air transportation, which is also less reliable due to weather, flight traffic, availability constraints, competition for space, and the added hand-offs involved," Frum said.

Many Democrats have called for the ouster of DeJoy, a major donor to the GOP and former President Donald Trump.

The USPS' sweeping plan, titled "Delivering for America," promises to make the Postal Service more competitive and more modern -- including a new energy-friendly fleet of delivery vehicles. In March, DeJoy, a Trump administration holdover, told reporters in a news briefing that it "takes a holistic view of the organization and is meant to elevate our business, competitiveness and our ability to meet the needs of the nation."

But several senior Democrats blasted the plan, with House Oversight and Reform Chairwoman Carolyn Maloney of New York criticizing what she called the "unacceptable decision to make permanent slower mail delivery," and Virginia Rep. Gerry Connolly, who has taken on DeJoy in congressional hearings, calling it "a draconian plan that guarantees the death spiral of the United States Postal Service."

Michigan Sen. Gary Peters said he was concerned the service changes would hurt people "who rely on the Postal Service for prescription drugs, financial documents, running their small businesses and more."

Amid mail slowdowns during summer 2020, Democratic lawmakers linked DeJoy to then-President Trump's anti-mail-in voting rhetoric. The party accused DeJoy of attempting to sabotage the Postal Service just as now-President Joe Biden was relying on mailed ballots to deliver him the White House.

During congressional hearings at the time, DeJoy sparred with Democratic lawmakers over the slow delivery rates, the 2020 election and his forthcoming 10-year plan.

In February, DeJoy apologized for slow mail during the peak holiday season, telling the Democratic-controlled House Oversight and Reform Committee that it was "unacceptable."

Also in February, Biden nominated three people to the agency's Board of Governors, a move some lawmakers hoped would eventually lead to DeJoy's ouster and that fulfilled a promise the administration would make the board and the agency a priority in the early days of his presidency. The trio of nominees said in April during a congressional hearing that they had not made any commitments or been pressured about the potential firing of DeJoy.

The president cannot remove the postmaster general. Only the Postal Service Board of Governors -- which is composed of members nominated by the president and confirmed in the Senate -- has the power to do so.