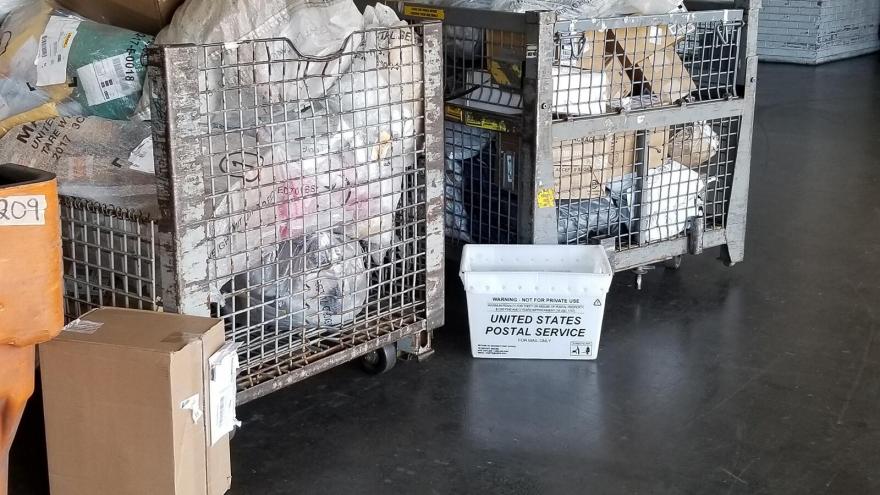 For the third day in a row, the US Postal Service moved fewer ballots on-time in critical battleground states than it did in the previous day, according to court filings Sunday.

(CNN) -- For the third day in a row, the US Postal Service moved fewer ballots on-time in critical battleground states than it did in the previous day, according to new court filings Sunday.

With Election Day only two days away, these continued drops in performance mean ballots are now at significant risk of not arriving to election offices in time to get counted. In a majority of states, mail ballots postmarked before or on Election Day don't count if they arrive after the polls close.

In a document filed in US District Court Sunday, USPS said that on a national level, they moved fewer ballots on time on Saturday than on Friday and their processing score dropping from 93% to 91%. Scores have been steadily declining since Wednesday, when USPS reported they moved 97% of ballots on time.

More critical battlegrounds states are now experiencing a drop in scores -- below 90% -- and those already below that, did not improve substantially and some dropped even lower.

The Colorado and Wyoming district sank to the lowest in the nation, moving only 43% of ballots on time Saturday. Almost all Coloradans vote by mail because the state sends every voter there a ballot through the mail.

Just 62% of Central Pennsylvania's ballots, and 64% of Atlanta's ballots moved on-time on Saturday. Only 64% of the ballots processed by USPS in Northern New England, which includes New Hampshire and Maine, were done so on-time.

Arizona, Michigan, Wisconsin, Minnesota, North Carolina, the rest of Pennsylvania and parts of Texas and Florida were under the 90% mark as well.

These figures do not include ballots being returned through what USPS calls "local turnaround." That's the process USPS says some post offices have implemented, where ballots are being delivered directly to local boards of election -- they are postmarked, but don't go through normal mail processing.

Federal Judge Emmet Sullivan in Washington, DC, is considering whether the US Postal Service should take even more steps before Election Day to improve scores so that mailed ballots can be delivered quickly and before voting deadlines.

In court, Department of Justice lawyers representing the USPS and USPS executives have repeatedly emphasized that further orders from the court to increase service may be difficult to implement, and that all of the 440,000 postal employees know it's "all hands on deck" to deliver ballots on time, to count on November 3.

On Saturday, USPS officials testified the latest delays on staffing shortages due to Covid-19. The USPS said the drop in service in Colorado and Wyoming was also due to inclement weather.

To fix the issues, USPS has provided "multiple layers of operational oversight," is coordinating closely with the USPS inspector general, and has been holding daily troubleshooting calls with problem areas.

The agency also announced Friday that it will collect mail Sunday for some routes (there is typically no Sunday collection), and conduct early collections Monday and Tuesday with ballot delivery to election offices on the same day. Carriers will also check for outgoing mail at "every residential mailbox" and post offices will set up special lanes for people to drop off ballots.

The Postal Service has faced intense political criticism, and several lawsuits and court orders, after it planned policy changes that could slow down the mail.