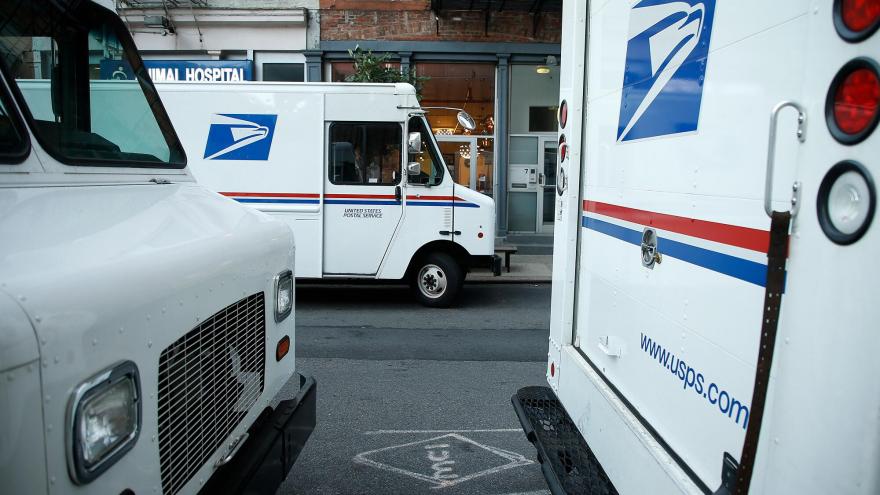 The United States Postal Service announced an agreement with the NAACP on a lawsuit the civil rights organization filed prior to the 2020 election that had challenged USPS delivery delays.

(CNN) -- The United States Postal Service announced an agreement Friday with the NAACP on a lawsuit the civil rights organization filed prior to the 2020 election that had challenged USPS delivery delays.

Under the settlement, the USPS said it anticipates enacting policies and practices during the 2022 midterms that are similar to the "extraordinary measures" used during the November 2020 general election. Those measures came amid criticism that the USPS, under the leadership of Postmaster General Louis DeJoy, implemented changes that impacted the delivery of mail-in ballots during a highly consequential election year and ongoing Covid-19 pandemic.

Between 2024 and 2028, the Postal Service agreed to publicly post guidance documents that outline its "good faith efforts to prioritize monitoring and timely delivery" of election mail.

Under the new agreement, the agency agreed to meet with NAACP officials in the months before each national primary and general election through 2028 to provide weekly reports on service in the six weeks leading up to an election. Those outreach meetings will be held twice during each of those four election cycles -- with one meeting convened no later than April and the other in August or September in each of those years.

The meetings are meant to be "cooperative discussions" where the two parties can discuss election mail performance, frequently reported election mail issues, policies and operational efforts, among other things.

Under the agreement, the USPS will provide the NAACP with weekly service performance scores for first class and standard mail for the six weeks before and one week after the November 2022 and 2024 general elections.

"With the NAACP's ability to now monitor the performance of the USPS during national elections, we will ensure that the right to vote is protected for of all citizens, including those often suppressed," NAACP National President Derrick Johnson said in a statement following the settlement.

Associate Attorney General Vanita Gupta said in a statement Friday that the Justice Department is "pleased we could facilitate a resolution that reflects the commitment of all of the parties to appropriately handling and prioritizing election mail."

The NAACP sued the USPS in August 2020, arguing that the changes the agency made led to "unreliable service and widespread delays" in mail delivery and risked delaying mail-in ballots on time for the November 2020 election.

USPS denied doing so and instead asserted that it carried out its role "admirably and consistent with the applicable standards."

The agreement signed Friday said it is neither an admission by either party "of the merit or lack of merit" of the opposing party's claims or defenses, nor a "an admission of liability or fault" by the defendants.