Using olive oil instead of these foods could add years to the life of your heart, study says 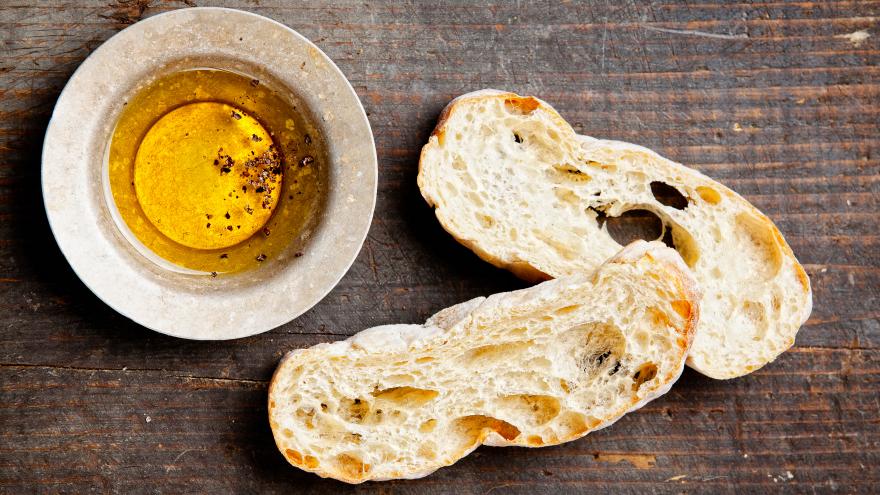 (CNN) -- The health benefits of the Mediterranean diet are renowned: Lots and lots of veggies, fruit, fish and olive oil have been shown to strengthen bones, improve brain health and reduce the risk for some cancers, diabetes, high cholesterol,heart disease and stroke.

People living around the Mediterranean Sea are well-versed in the daily use of olive oil.

Residents of the United States? Not so much. They mostly choose to cook with butter, margarine and soybean or canola oil.

Now a new study of Americans shows that replacing a mere five grams of margarine, butter or mayonnaise with the same amount of olive oil was associated with up to a 7% lower risk of coronary artery disease.

To put that into context, five grams is about a half pat of butter or margarine and one teaspoon of mayonnaise or fatty dairy products.

Even better, people who used even higher olive oil intake -- more than seven grams, or 1/2 tablespoon a day -- had a 15% lower risk of any kind of cardiovascular disease and a 21% lower risk of coronary artery disease. It didn't appear to have an impact on stroke risk, however.

"The main thing is to replace unhealthy fats with olive oil and that can improve cholesterol, reduce inflammatory biomarkers and improve cardiovascular health," he said.

The results echoed a 2013 study of over 7,000 people, one of the largest ever done. It found people who followed a Mediterranean diet supplemented with extra virgin olive oil for five years had a 30% lower risk of heart attack or stroke.

They also showed a slower rate of cognitive decline and were better able to control their weight. That's encouraging, considering the high calorie count of olive oil -- about 120 calories in each tablespoon.

Rumors that the "smoke point" or burning point of olive oil would release harmful compounds were squashed by a 2018 Australian study which found that EVOO -- extra virgin olive oil -- was actually more chemically stable at high temperatures than other common cooking oils.

Extra virgin olive oil (but not regular olive oil) produced the lowest levels of trans fats and other potentially harmful byproducts when heated to temperatures even higher than those commonly used for sauteing, deep-frying and baking. Coconut oil took second place.

Canola oil, an American favorite, was the most unstable, creating over twice as many harmful compounds than extra virgin olive oil and well above the "limits permitted for human consumption," the study found.

Of course there are many ways to enjoy olive oil -- whether it's extra virgin or not -- other than just in a frying pan. Olive oil is perfectly suited for "emulsifying" two ingredients together -- mayonnaise is one example. Salad dressings and vinaigrettes made with olive oil are another. Pesto is made with olive oil. And roasting vegetables, salmon and other foods with a sprinkle of olive oil brings out the flavors, say experts.

"We're talking about moderate changes in eating behaviors," Hu said. "Instead of using butter for your bread, dip it in olive oil. Instead of using a store-bought salad dressing, use olive oil and vinegar instead.

"These small changes can have significant health benefits in the long run."