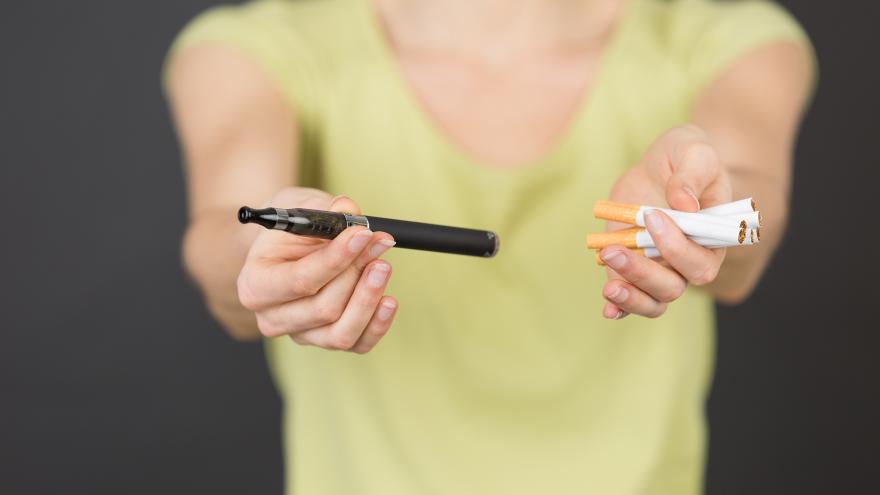 (CNN) -- Using e-cigarettes and other tobacco products to keep from relapsing to cigarettes doesn't appear to be effective, according to a new longitudinal study of nearly 13,000 smokers in the United States.

"This is the first study to report on whether cigarette smokers can switch to e-cigarettes without relapsing to cigarette smoking," said study author John Pierce, a professor of family medicine and public health at the UC San Diego Institute for Public Health in the Wertheim School of Public Health and Human Longevity Sciences.

"Quitting is the most important thing a smoker can do to improve their health," he said in a statement attached to the study, "but the evidence indicates that switching to e-cigarettes made it less likely, not more likely, to stay off of cigarettes."

The study did not look at the use of nicotine replacement therapy (NRT) designed to help people stop smoking, Pierce told CNN. Those therapies include patches, gum and lozenges that contain limited amounts of nicotine.

"This paper is not focused on quit attempts," Pierce said. "It is focused on people who appear to have been successful at quitting cigarettes and whether those who switched to an alternative nicotine source -- this is rarely long-term use of NRT -- do better than those who are abstinent from nicotine."

Use of e-cigarettes as anti-smoking aid

E-cigarettes are increasingly being used as a nicotine alternative as smokers seek ways to kick their habit -- and then stay off cigarettes for good. E-cigarettes work by heating a pure liquid called e-juice -- composed of flavorings, propylene glycol, glycerin and often nicotine -- until it vaporizes.

The use of vaping for tobacco cessation became especially popular in the UK after a study found that e-cigarettes helped 50,000 to 70,000 smokers in England quit smoking in 2017.

Vaping supposedly eliminated the 7,000 or more chemicals found in a burning cigarette and its smoke, many of which are toxic, according to Johns Hopkins medicine.

But their use has become controversial in the US and other countries due to warnings about possible long-term health effects, possibly from ingredients besides nicotine in the vape juice or cartridge. The US Surgeon General says vapes can contain "ultrafine particles that can be inhaled deep into the lungs, flavorants such as diacetyl, a chemical linked to serious lung disease, volatile organic compounds and heavy metals, such as nickel, tin, and lead."

In addition, numerous studies found teen use is a direct gateway to traditional cigarette smoking at a time when juvenile use of e-cigarettes was skyrocketing.

A 2019 outbreak of a mysterious vaping-related lung disease among American youth has triggered alarm as well. As of February 2020, the condition had killed at least 68 people and sickened more than 2,807, according to the US Centers for Disease Control and Prevention.

One 18-year-old American who vaped for over a year ended up in the hospital with "lungs like a 70-year-old."

The new study, published Tuesday in the journal JAMA Network Open, analyzed data on smokers who had quit cigarettes. The data was gathered by the National Institute on Drug Abuse and the Food and Drug Administration's Center for Tobacco Products. The study looked at whether the smokershad quit with the help of other forms of tobacco, such as cigars, cigarillo, filtered cigars, pipes, hookah, smokeless products like snuff, and any e-cigarette product. The study then looked at relapse rates at two yearly intervals.

"Our goal in this study was to assess whether recent former smokers who had switched to e-cigarettes or another tobacco product were less likely to relapse to cigarette smoking compared to those who remained tobacco free," said senior author Karen Messer, chief of the Division of Biostatistics and Bioinformatics at the Herbert Wertheim School of Public Health.

The analysis found 50% of former smokers who quit tobacco "cold turkey" were off cigarettes at the second annual follow up, but only 41.5% of those who used any other form of tobacco use, including e-cigarettes, had quit successfully.

"Those who switched to e-cigarettes (or indeed another form of tobacco) were 8.5 percentage points more likely to relapse to cigarettes," said Piercevia email.

Additional studies are needed to analyze how e-cigarette use affects quitting and relapsing over longer periods of time, the authors stated.

"For e-cigarettes to truly work in long-term smoking cessation, people must successfully switch completely away from cigarettes," Pierce said. "To date, researchers have not been able to demonstrate that smokers can do this."

How to quit successfully

The good news is that smokers do successfully quit. In fact, the CDC said that as of a decade ago, there are more "former smokers than current smokers,"in the US.

The American Lung Association also has a website full of tips and both online and in-person support for smoking cessation.