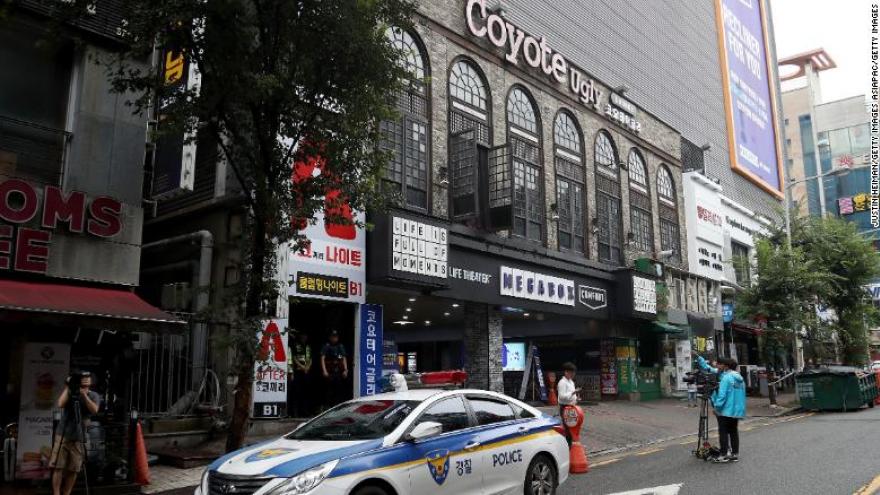 The casualties in the incident, which took place in the Coyote Ugly club in the city of Gwangju, included athletes competing in the FINA World Aquatics Championships, according to South Korean news agency Yonhap.

The two people killed were both South Koreans while the injured included four Americans, two New Zealanders, one Dutch, one Italian and one Brazilian, authorities told Yonhap. It said their injuries were not severe.

The injured Americans were US water polo players, a statement from USA Water Polo said. They were celebrating the Women's National Team winning the FINA World Championship on Friday. None had life-threatening injuries.

The internal structure collapsed around 2:30 a.m local time, according to a tweet by the South Korean Ministry of Public Administration and Security.

"Currently, police and fire departments are investigating the precise cause of the accident," the agency said.

What caused the collapse?

Authorities are investigating whether the loft collapsed due to the weight, Yonhap reported. Witnesses told the news agency there were about 100 people in the loft area at the time of the collapse.

Matt Small, New Zealand men's water polo team captain, reported that he was on the second floor of the club when it collapsed. "We were just dancing and then the next minute we dropped," he told New Zealand's Radio Sport.

"We... fell on top of the heads of other people that were beneath us... Some of them were pretty dire cases."

Kim Young-don, head of the Gwangju Seobu fire station, said at a briefing that there were around 370 inside the club at the time of the collapse. "We deem that the second level... seems to have collapsed because there were too many people on it," he said. "The second level is a small space, it's not a space where a lot of people can be."
The accident comes just a day before the championships draw to a close as the city is teeming with hundreds of athletes from across the globe.
"As some Championships' participants were present at the moment of the accident, FINA is carefully monitoring the situation and will activate all measures to ensure health care and assistance is provided whenever necessary," FINA said in a statement.

Christopher Ramsey, CEO of USA Water Polo, described the incident as a tragedy. "Players from our men's and women's teams were celebrating the women's world championship victory when the collapse occurred," he said. "Our hearts go out to the victims and their families."

Of the American athletes, Kaleigh Gilchrist had surgery for a "deep" cut to her left leg, the polo organization said. Paige Hauschild needed stitches on cuts to her right arm, Johnny Hooper needed them on his left hand, and Ben Hallock had minor scrapes on his legs.

The team said in an earlier statement all American athletes were safe and accounted for.

"Our thoughts are with those involved," the organization said on Twitter. It also said families of its team members had been notified.