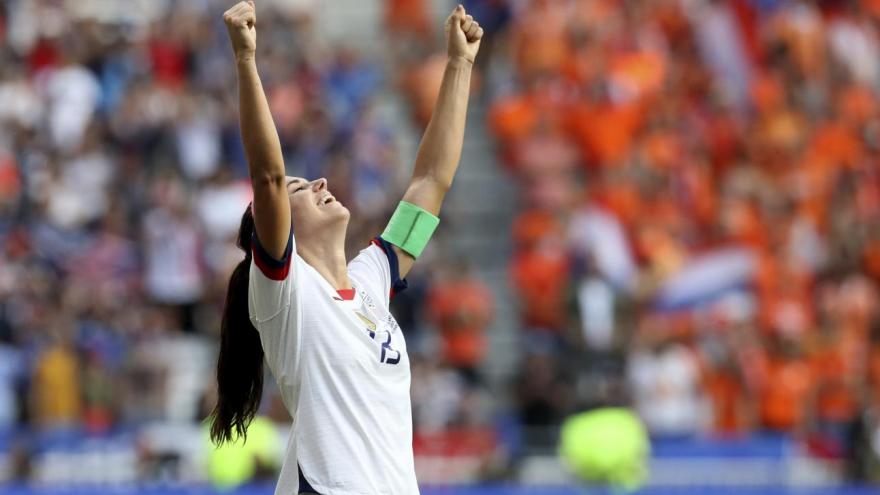 The US Women's National Team will be honored with a ticker tape parade after its World Cup soccer win over the Netherlands 2-0 on Sunday, New York City Mayor Bill de Blasio announced in a tweet.

(CNN) -- The US Women's National Team will be honored with a ticker tape parade after its World Cup soccer win over the Netherlands 2-0 on Sunday, New York City Mayor Bill de Blasio announced in a tweet.

The parade down the Canyon of Heroes will take place Wednesday at 9:30 a.m. ET, according to the mayor's Twitter post: "you have inspired the entire country — and New York City knows how to celebrate champions."

The US women's soccer team won its second consecutive FIFA Women's World Cup and record-extending fourth title. The American team also won the World Cup in 1991, 1999 and 2015. For Sunday's win, Megan Rapinoe scored a penalty goal in the second half, giving the Americans a 1-0 lead, and then Rose Lavelle added a second point to the scoreboard with a shot in the 69th minute.

Since the first ticker tape parade in 1886, New York has hosted 206 marches up Broadway from the Battery to City Hall, according to the Alliance for Downtown New York, a commercial advocacy, research, and information group. Each parade is marked with a granite strip along the parade route.

The last one in July 2015 also honored the soccer team after its defeat of Japan 5-2.

The ticker tape machine was invented in 1867 to record telegraphed stock trades for brokerage firms located in Lower Manhattan, the city's financial district. The machine spit out inch-wide ribbons of paper printed with the trades. Office workers learned that handfuls of ticker tape thrown into the air created a dramatic effect.

"Contemporary accounts of the earliest ticker-tape parades describe the cascade of scrap paper as a spontaneous gesture on the part of spectators inspired by the festivities outside their windows," according to the Alliance.

The parades generate literally tons of paper and other debris, the NYC Department of Sanitation says.

For example, the 336 men and women assigned parade cleanup collected 34.06 tons of confetti and other trash after the 2012 parade in honor of the New York Giants Super Bowl XLVI Win.