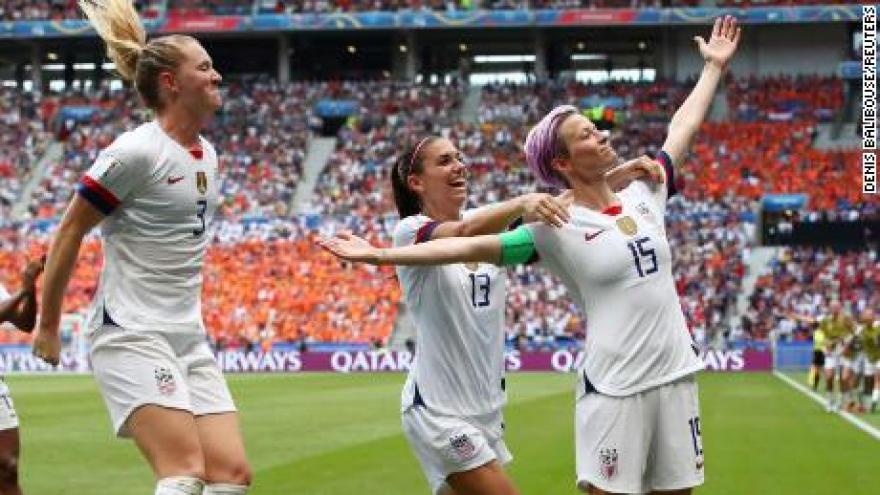 The United States has won the Women's World Cup for the fourth time after beating the Netherlands 2-0 on Sunday night.

Midfielder Rose Lavelle's fine solo goal made it 2-0 in the 69th, as she powered to the edge of the penalty area and hit a low strike.

Rapinoe's sixth goal moved her even with teammate Alex Morgan and England's Ellen White as the tournament's leading scorers.

Rapinoe, who recovered from a right hamstring strain to play, got an ovation from the U.S. fans when she came off in the 79th.

Rose Lavelle has put the United States up 2-0 against the Netherlands with a fine solo goal in the 69th minute.

The midfielder collected the ball some 30 meters out, advanced to the penalty area and skipped past defender Stefanie van der Gragt before planting a low shot past goalkeeper Sari van Veenendaal.

She was mobbed as she dived into the arms of her teammates as she sprinted to the U.S. bench to celebrate.

Megan Rapinoe has opened the scoring for the United States in the 61st minute with a penalty against the Netherlands in the Women's World Cup final.

Rapinoe confidently struck the spot-kick down the middle and past a static Sari van Veenendaal, who seemed to anticipate Rapinoe would shoot to the side and was wrong-footed.

It was Rapinoe's sixth goal, tying her with Morgan and England's Ellen White at the top of the scoring charts.

U.S. defender Kelley O'Hara has been replaced for the second half by Ali Krieger.

O'Hara needed on-field treatment near the end of the first half after colliding head to head with Dutch winger Lieke Martens as they jumped up to contest a high ball.

The United States and the Netherlands were deadlock 0-0 at halftime in the Women's World Cup final, mainly because of Dutch goalkeeper Sari van Veenendaal. She has made three key stops.

Van Veenendaal imposed herself again in the 38th, keeping out Alex Morgan's low shot from Megan Rapinoe's left-wing cross. She denied Morgan again, this time with an even better save, low to her left to tip Morgan's fizzing driver away for a corner.

U.S. goalie Alyssa Naeher had a quiet half but came out confidently to clear the ball when forward Lineth Beerensteyn chased down a pass from Vivianne Miedema.

Dutch winger Lieke Martens and U.S. defender Kelley O'Hara both needed brief on-field treatment near the end of the half after colliding head to head while going for a header.

Speaking on France Info radio before the Women's World Cup final in Lyon, Macron said "we need to go progressively toward that."

On Friday FIFA President Gianni Infantino announced he'll seek to double the prize money for women at their next World Cup in 2023. But even doubling the pool from $30 million to $60 million doesn't diminish the gap with the men's World Cup prize money, which is set at $440 million for the 2022 World Cup, up from $400 million last year.

Macron, who supports Marseille —the only French team to have won the European Cup — said interest in women's sports will be boosted significantly after this tournament.

Macron said "we have the World Cup effect" and added "things will never be the same" for women's soccer in France.

On a sunny day at Stade de Lyon, the Dutch fans are making the stadium even brighter with their orange jerseys.

The Oranje have packed themselves behind one of the goals and several are waving the horizontally striped red-white-blue national flag.

The Dutch players went over to applaud them as they ran out onto the sunbaked field.

Megan Rapinoe returned to the starting lineup for the United States in the Women's World Cup final against the Netherlands on Sunday.

Rapinoe missed the 2-1 semifinal victory over England on Tuesday with a minor hamstring injury. She had two goals in each of the previous two games of the knockout stage.

There were concerns that midfielder Rose Lavelle would also be sidelined with a hamstring injury, but she started.

Alyssa Naeher started at goalkeeper for the seventh straight game, and the backline of Crystal Dunn, Becky Sauerbrunn, Abby Dahlkemper and Kelley O'Hara remained unchanged from the semifinal.

Accompanying Lavelle in the midfield was Julie Ertz and Sam Mewis. Alex Morgan was up top flanked by Tobin Heath and Rapinoe.

Lieke Martens kept her place in the Netherlands starting lineup despite a recent foot injury.

The left winger struggled during the semifinal win against Sweden, going off at halftime. She has been carrying the injury since scoring a 90th-minute penalty in the 2-1 last-16 win against Japan, when a teammate stood on her foot during the celebrations. In the only change to the Dutch team which beat Sweden 1-0 in the semis, Anouk Dekker replaces Merel van Dongen on defense.

The United States will be vying for its fourth Women's World Cup title when it meets European champion the Netherlands on Sunday.

The U.S. is the defending champion, while the Dutch women are appearing in their first World Cup final.

Both sides had narrow wins in the semifinals, with the U.S. beating a physical England team 2-1 and the Dutch needing extra time to overcome Sweden 1-0.

The finalists both have female coaches. Jill Ellis leads the United States and Sarina Wiegman is in charge of the Netherlands.

It's the first time since 2003 that two women have coached against each other in the final.