US will make 'significant contributions' to rebuilding Gaza, Blinken says 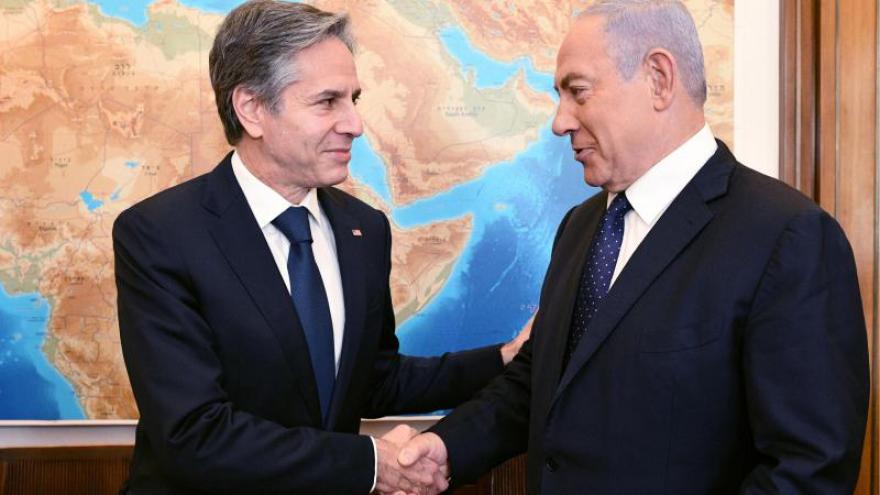 US Secretary of State Antony Blinken meets with Israeli Prime Minister Benjamin Netanyahu on Tuesday following discussions on the first day of his first official tour of the Middle East.

(CNN) -- The United States will make "significant contributions" to rebuild Gaza and reopen its consulate in Jerusalem following the recent conflict between Israel and Hamas, US Secretary of State Antony Blinken said on the first day of his first official visit to the region.

Blinken, speaking alongside Israeli Prime Minister Benjamin Netanyahu in Jerusalem, said the US would "work to ensure that Hamas does not benefit" from the aid

Blinken's meeting with Netanyahu and other senior Israeli officials marked the first stop on a trip to the Middle East.

HIs visit comes on the heels of the worst violence in years between Israel and Hamas. Israeli strikes during the recent conflict killed at least 248 Palestinians, including 66 children, according to Hamas health officials. At least 12 people in Israel, including two children, were killed by Palestinian militant fire from Gaza, according to Israel's military and the emergency service.

Israel and Hamas agreed to a ceasefire on Friday, after 11 days of conflict.

Speaking on Tuesday, Blinken said the losses on both sides in the conflict between Israel and Hamas were "profound."

"Casualties are often reduced to numbers. But behind every number is a human being -- a daughter, a son, a father, a mother, a grandparent, a best friend. And as the Talmud teaches, to lose a life is to lose the whole world, whether that life is Palestinian or Israeli," Blinken said.

Blinken said he and Netanyahu had a detailed discussion about Israel's security needs, including re-supplying the Iron Dome aerial defense system with rocket interceptors.

Blinken also spoke about the right of Israelis and Palestinians, who he said "equally deserve to live safely and securely, to enjoy equal measures of freedom, opportunity and democracy, to be treated with dignity," but he did not specifically mention the two-state solution or suggest that comprehensive peace negotiations were imminent.

Netanyahu used the meeting to urge the US not to return to the Iran nuclear deal known as the JCPOA. He said the deal would allow Iran to develop nuclear weapons, and said Israel reserved the right to defend itself.

In response, Blinken said only that Washington would "continue to consult" with Israel as indirect talks between Iran and the US continue in Vienna, Austria.

Biden administration to reopen US consulate in Jerusalem

Following that meeting, Blinken announced that the Biden administration will be reopening the US consulate in Jerusalem and providing $5.5 million in immediate disaster assistance to Gaza as well as additional new assistance to the Palestinian people.

Blinken said that opening the consulate, which was closed during the Trump administration and serves as the primary diplomatic post for US-Palestinian relations, is an important way for the US to "engage with and provide support to the Palestinian people."

"I am here to underscore the commitment of the US to rebuilding a relationship to the Palestinian Authority and with the Palestinian people," the top US diplomat said. "A relationship built on mutual respect and also a shared conviction that Palestinians and Israelis alike deserve equal measures of freedom, security, opportunity and dignity."

The US is working with the UN, the international community, the Palestinian Authority and the Israeli government to assist in recovery and relief efforts in Gaza. Blinken said these efforts are "urgent." Blinken said the US will work with partners to be sure that Hamas does not benefit from these reconstruction efforts.

"Asking all of us to help rebuild Gaza only makes sense if there is confidence that what is rebuilt is not lost again because Hamas decides to launch more rocket attacks in the future," he added.

Abbas could be heard saying "yes" when he made that statement.

Blinken also said the US welcomes the ceasefire holding but said that is "not enough." He said the last round of violence was symptomatic of a "larger set of issues that we have to address if we are going to prevent its occurrence." He also conveyed the "deep condolences" of the US to the families of those who lost loved ones in recent violence.

"I say this as a father, no child whether Israeli or Palestinian or American is a statistic. We know the human consequences when violence takes the upper hand and we are determined that that not be the case. The loss of any child is a universe of loss and in some ways incomprehensible except to those who suffered the loss," Blinken said.

Abbas thanked the Biden administration for the resumption of assistance to UNRWA, for its commitment to a two-state solution and for its position on the expansion of settlements. He also said the Palestinian government stands ready to work on the reconstruction of Gaza and to establish a national unity government.