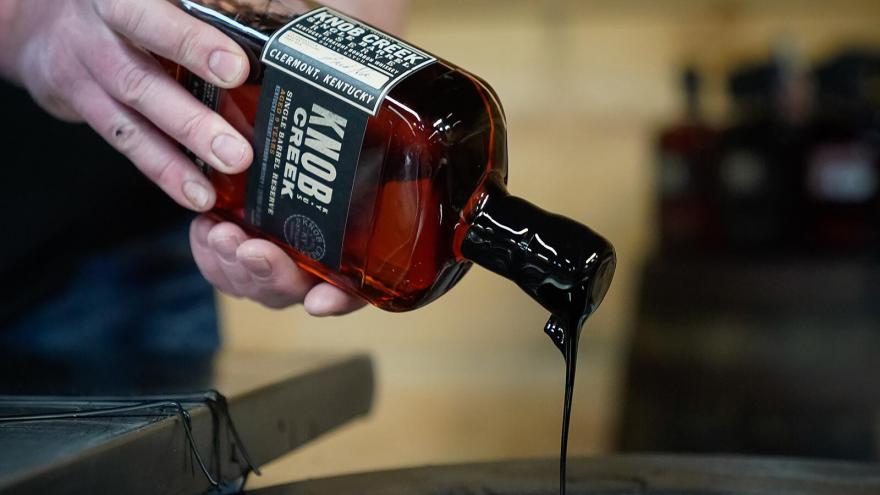 Europe's retaliatory tariffs on American whiskey are set to double to 50% in June unless the Biden administration lifts tariffs on foreign steel.

(CNN) -- Europe's retaliatory tariffs on American whiskey are set to double to 50% in June unless the Biden administration lifts tariffs on foreign steel put in place by former President Donald Trump.

US Trade Representative Katherine Tai -- President Joe Biden's top trade official -- gave no indication that the government is preparing to lift the duties when testifying Wednesday before the Senate Finance Committee about the President's 2021 trade agenda.

The Trump administration added the tariffs in 2018 to help bolster the US steel industry as well as pressure trading partners into entering revised agreements.

Trump lifted the tariffs on steel produced in Canada and Mexico after the three countries signed the new US Mexico Canada Agreement. But those duties, which Trump put in place by invoking a tool -- known as section 232 -- designed to protect domestic industry from national security threats, remain in effect on steel imports from most other countries in the world.

That's triggered retaliation even from allies like the European Union and Britain.

American whiskey distillers have faced a 25% tariff from the European Union and the United Kingdom for nearly three years. Whiskey exports to Europe have dropped by 37% since then and exports to the UK have been cut in half.

"A 50% tariff on American whiskeys would no doubt make it cost prohibitive for some craft distillers to do business in the EU after all the time, energy and investment they spent working to break into this important international market," said Lisa Hawkins, senior vice president of public affairs at the Distilled Spirits Council, in a statement.

Tai deflected when asked by Oklahoma Republican Sen. James Lankford how long the steel tariffs would be in place. Steel producers in his state, he said, have a hard time planning future capital investments without knowing whether the tariffs will remain.

"Clearly we have a commitment to being a strong country that produces steel for itself," Tai replied, adding that she is "open to improving and perfecting the tools that we have to make them more effective."

A bipartisan group of senators this week called on Tai and Commerce Secretary Gina Raimondo to come to a resolution that would remove the retaliatory tariffs, arguing that distillers have been struggling due to the pandemic and that the levies are making it even more difficult for them to recover.

A separate trade dispute with the EU over aircraft subsidies led to tariffs on $4 billion worth of US exports to the EU and $7.5 billion of EU exports to the United States, hitting French wine, Italian cheese, and single malt Irish whiskey. In March, the the two countries agreed to suspend those duties for four months. But if they don't reach an agreement before July, the tariffs could go back in place.

At Wednesday's hearing, Tai said she has told her counterparts that she is "very serious" about getting the disputes resolved by the four-month deadline, adding that she is "encouraged" by the continuing negotiations.

The Biden administration has also left in place Trump's tariffs on roughly $350 billion of Chinese-made goods. While they have cost American importers billions of dollars, the new administration is continuing to take a hard line on China for engaging with unfair trade practices, such as intellectual property theft and forced technology transfers.