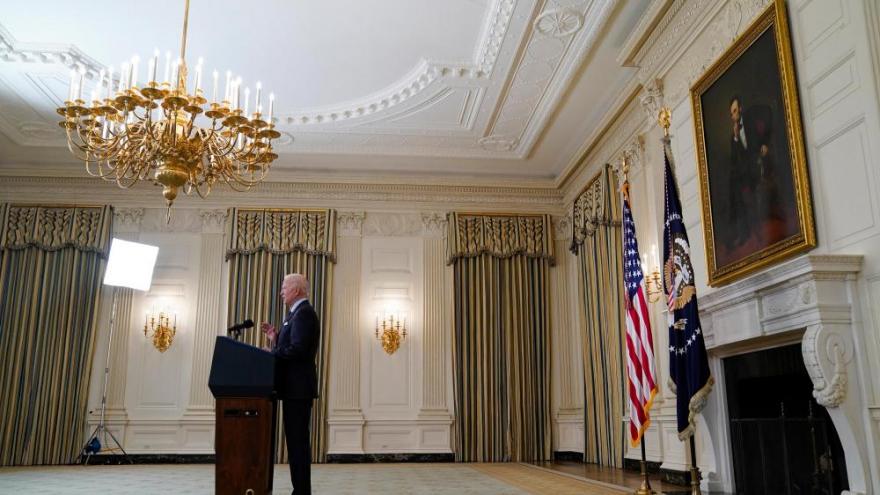 The Biden administration is weighing unfreezing $1 billion in Iranian funds that the country could use for humanitarian relief. Biden is shown in the State Dining Room of the White House, Tuesday, May 4, 2021, in Washington.

(CNN) -- The Biden administration is weighing unfreezing $1 billion in Iranian funds that the country could use for humanitarian relief, amid the negotiations for the US to reenter the 2015 nuclear deal and bring Iran back into compliance with its terms.

It is not clear whether the release of the funds would occur unilaterally, but one line of thought is that it could serve as a useful goodwill gesture to Tehran, according to three people briefed on the internal deliberations, as the talks in Vienna enter their second month with no concrete signs yet of a breakthrough. The Iranians continue to demand sanctions relief in return for compliance with the nuclear deal.

The funds would not be provided in cash; instead, they'd be allocated to a Swiss channel, known as the Swiss Humanitarian Trade Arrangement, which was set up last year to allow humanitarian aid like food and medicine to be sent to Iran without violating US sanctions.

But the plan is facing opposition from Iran hawks in Congress who are privy to the discussions, said one Republican congressional staffer. The staffer said that some on Capitol Hill view the idea of unfreezing any of Iran's money as a concession that would diminish the US' leverage.

But some experts see the move as something that could create momentum in the talks.

"If it demonstrates the kind of good faith that can cause reciprocal good faith from the Iranian side, then it is potentially a good step forward," said Thomas Countryman, who served as US assistant secretary of state for international security and nonproliferation from 2011 to 2017.

A congressional Democratic aide separately confirmed that the US negotiating team had recently consulted with congressional staff about humanitarian relief and how that might work, including unfreezing funds to place in the Swiss channel. A US official acknowledged that the plan has been under consideration, but said the chief goal right now among US negotiators is a mutual return to the nuclear deal.

Experts said another option would be for the US to allow the International Monetary Fund to approve a request from Iran for $5 billion to fight the Covid-19 pandemic. The Trump administration had sought to block that loan, arguing Iran could divert the funds to boost its economy.

"Reporting suggesting we are weighing the release of Iranian funds as a unilateral gesture to Tehran is not true, which we made clear prior to publication," State Department Spokesman Ned Price said. "As we have said, any substantial move by the U.S. would have to be part of a process in which both sides take actions."

CNN has reached out to the National Security Council for comment.

The debate underscores the sensitivity of the negotiations and has also laid bare a disagreement between the White House and its chief envoy for the talks, Rob Malley, as the new administration tries to balance the negotiations with political considerations at home.

Malley has been pushing for several months for the funds to be unfrozen and used for humanitarian purposes, said people familiar with the efforts. But the White House had been reluctant to release any of the money before any progress had been made on reentering the Joint Comprehensive Plan of Action, the formal name for the Iran nuclear deal, a source familiar with the matter said.

Optics and political considerations have also been at play. Then-President Barack Obama faced steep opposition from Republicans when it was revealed that his administration had transferred about $1.7 billion to Iran in early 2016. Then, as now, the money technically belonged to Iran anyway and did not come from American taxpayers. But the backlash was swift, and former President Donald Trump repeatedly criticized the decision both on the campaign trail and while in office. He ultimately withdrew the US from the Iran deal in 2018 and imposed new sanctions that Iran has demanded be fully removed before the country will return to compliance with the nuclear deal.

The discussions about unfreezing the funds also come amid waning optimism that there will be a breakthrough in the talks and a full return to the nuclear deal before Iran's June elections, the people familiar with the deliberations said, which could result in the country's hardliners gaining more power and therefore make striking a deal with the US more difficult.

A senior State Department official, speaking to reporters before a new round of talks begins in Vienna on Friday, said the negotiations so far had "helped crystallize the choices" that need to be made by both Iran and the US. The official said a return to the deal could be "relatively swift" since "we're not inventing something new," but that progress "is ultimately a matter of the political decision that needs to be made in Iran."

Pro-Iranian media reported last weekend that the US had agreed to unfreeze $7 billion in Iranian funds and arrange a prisoner swap as part of the negotiations, but the State Department rejected the prisoner swap reports as false and a senior official told reporters on Thursday that those responsible for the leak were guilty of "unspeakable cruelty." The department did not weigh in on the reports that the US would unfreeze funds, but a source briefed on the talks said the $7 billion figure was incorrect.

The White House is at the same time facing pressure to tread cautiously from Israel, which sent a delegation to Washington last week to discuss, among other things, the ongoing Iran deal talks. In a brief meeting with Biden last week, Israeli top intelligence official Yossi Cohen reiterated what Israel has been saying publicly, said one person familiar with the meeting: namely, that it believes Iran cannot be trusted and that the US should not return to the nuclear deal.

Biden reiterated his commitment to the US-Israel relationship, the person said, and reassured Cohen that the US views a return to the deal only as a jumping-off point for further discussions about lengthening and strengthening its terms, to ultimately include limits on other areas of Iran's malign behavior in the region.

"On the issue of Iran, there has been clear and consistent communication between the Biden administration and the Israeli government at every level," said Halie Soifer, the CEO of the Jewish Democratic Council of America, who served as then-Sen. Kamala Harris' national security adviser.

"The Biden administration and the Israeli government share the fundamental objective of denying Iran a nuclear weapons capability, which is driving President Biden's effort to get Iran back into compliance with the JCPOA," Soifer said, adding that she believes the Biden-Cohen meeting was a "positive development."

Axios reported earlier this week that Biden had told Cohen that a US-Iran deal is not imminent. And on Sunday, national security adviser Jake Sullivan said as much publicly.

"There's still a fair distance to travel to close the remaining gaps" in the talks between the US and Iran, Sullivan told ABC News. "Those gaps are over what sanctions the United States and other countries will roll back; they are over what nuclear restrictions Iran will accept on its program to ensure that they can never get a nuclear weapon. So the short answer is, there is no deal now."