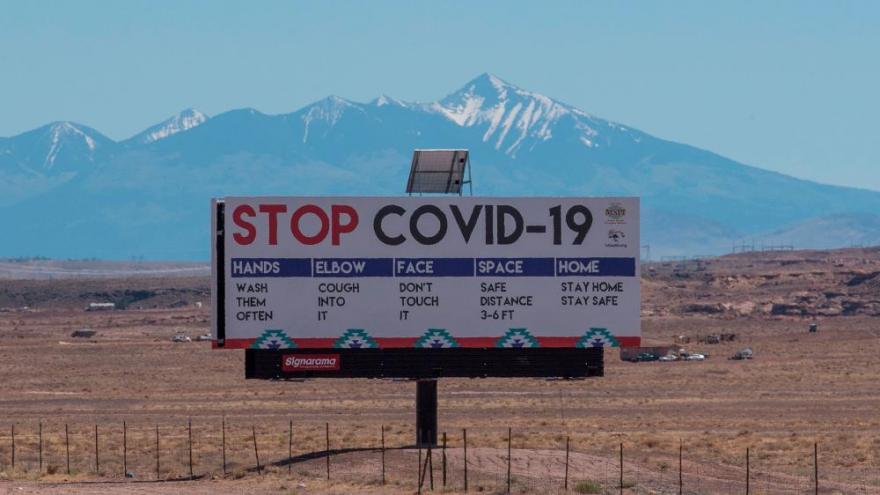 BALTIMORE, M.D. — The COVID-19 death toll in the United States has surpassed 350,000 as experts anticipate another surge in coronavirus cases and deaths stemming from holiday gatherings over Christmas and New Year's.

Data compiled by Johns Hopkins University shows the U.S. passed the threshold early Sunday morning. More than 20 million people in the country have been infected. The U.S. has begun using two coronavirus vaccines to protect health care workers and nursing home residents and staff but the rollout of the inoculation program has been criticized as being slow and chaotic.

Multiple states have reported a record number of cases over the past few days, including North Carolina and Arizona. Mortuary owners in hard-hit Southern California say they're being inundated with bodies.

The U.S. by far has reported the most deaths from COVID-19 in the world, followed by Brazil, which has reported more than 195,000 deaths.

— India has approved two COVID-19 vaccines, paving the way for a massive inoculation program. The vaccines are from Oxford University and AstraZeneca and local firm Bharat Biotech. In Britain, the prime minister is warning of new restrictions ahead as coronavirus infections soar. On Monday, the country plans to ramp up vaccinations using the Oxford-AstraZeneca vaccine. And in Tokyo, Gov. Yuriko Koike is asking the national government to declare a "state of emergency" to curtail surging coronavirus infections. Concerns are growing ahead of hosting the Olympics in July.

VATICAN CITY — Pope Francis said he was very saddened that some people during COVID-19 pandemic holiday lockdowns managed to slip away on vacations while so many are suffering economic problems or are ill.

During noon prayer remarks Sunday at the Vatican, Francis said that "we don't know what 2021 has in store for us."

But, he added, "what each of us and all of us together can do is to commit ourselves a little more to taking care of others" and of the environment, "our common home."

He acknowledged that there is the temptation to look after one's interests and to "live hedonistically, trying only to satisfy one's own pleasure."

Throughout the pandemic, the pontiff has stressed caring for those most in need and obeying anti-contagion measures.

Instead of appearing at a window overlooking St. Peter's Square, as he usually does on Sundays, Francis delivered his remarks, carried on television and social media, from inside a Vatican palazzo, in keeping with pandemic strategy to discourage crowds.

Vice President Constantino Chiwenga announced the new measures, saying that Zimbabwe recorded 1,342 cases and 29 deaths in the past week, the highest number recorded so far.

Funerals are now limited to 30 people while other gatherings such as weddings and church services are banned for 30 days. Restaurants and beer taverns have also been closed. The government has postponed indefinitely the opening of schools for a new term that was supposed to start on Monday, Jan. 4. But the new measures seem to have done little to reduce the country's general atmosphere of complacency.

Dr. Anthony Fauci says U.S. President-elect Joe Biden's pledge to administer 100 million shots of the coronavirus vaccine within the first 100 days of his administration is "a realistic goal."

The top U.S. infectious disease expert tells ABC's "This Week" says "we can do 1 million people per day. You know we've done massive vaccination programs ... in our history. There's no reason why we can't do it right now."

That optimism comes as the race to vaccinate millions of Americans is off to a slower, messier start than public health officials and leaders of the Trump administration's Operation Warp Speed had expected.

Fauci acknowledges "there have been a couple of glitches, that's understandable." He says the pace is picking up but "we are not where we want to be."

As the U.S. COVID-19 death toll tops 350,000, Fauci is taking issue with President Donald Trump's claim on Twitter on Sunday that the number of U.S. cases and deaths is "far exaggerated" because of the Centers for Disease Control and Prevention's "ridiculous" methodology.

Fauci says "the deaths are real deaths." He says hospitals are running out of bed and medical workers are exhausted under the strain of caring for the sick.

LONDON — British Prime Minister Boris Johnson warned Sunday that more onerous lockdown restrictions in England are likely as the country reels from a new coronavirus variant that has pushed infection rates to their highest recorded levels.

Johnson, though, insisted he has "no doubt" that schools are safe and urged parents to send their children back into the classroom in areas of England where they can. Unions representing teachers have called for schools to turn to remote learning for at least a couple of weeks more due to the new variant, which scientists have said is up to 70% more contagious.

The U.K. is in the midst of an acute outbreak, recording more than 50,000 new coronavirus infections a day over the past five days. On Saturday, it notched a daily record of 57,725 new cases. The country has seen nearly 75,000 virus-related deaths.

"We are entirely reconciled to do what it takes to get the virus under control, that may involve tougher measures in the weeks ahead," Johnson said in an interview with the BBC.

In some parts of the British capital and its surrounding areas, there are around 1,000 cases per 100,000 people.

BERLIN — A prominent German state governor is calling for the country's lockdown to be extended until the end of January and says there should be no rushed reopening of schools.

Germany's current lockdown took effect on Dec. 16 after a partial shutdown that started at the beginning of November failed to reduce new coronavirus infections. It was initially set to expire Jan. 10.

It's clear that Chancellor Angela Merkel and Germany's 16 state governors will agree to extend it when they review the situation on Tuesday. The question is by how long, and to what extent schools will open.

Bavarian governor Markus Soeder told Sunday's Bild am Sonntag newspaper that "the lockdown must be extended until the end of January." He said a "hasty easing would set us back a long way" and that Austria has shown "the open-closed-open-closed model doesn't work."

Some officials advocate opening primary schools early. But Soeder, whose state has above-average virus infections, said it would be "irresponsible" to send all students and teachers straight back to school.

India's drugs regulator gave an emergency authorization for the vaccines developed by Oxford University and U.K.-based drugmaker AstraZeneca and another developed by the Indian company Bharat Biotech.

Drugs Controller General Dr. Venugopal G Somani said both would require two doses and the decision was made after "careful examination" by the Central Drugs Standard Control Organization, India's pharmaceutical regulator. Both vaccines are cheaper and easier to use than ones by Pfizer and Moderna since they do not require ultra-cold storage facilities.

India's initial immunization plan aims to vaccinate 300 million people — health care workers, front-line staff including police and those considered vulnerable due to their age or other diseases — by August.

The Australian Capital Territory has shut out non-residents who have been in the northern beaches of Sydney, where the outbreaks are most concentrated, Greater Sydney and other smaller centers, unless they have an exemption.

The island state of Tasmania has barred anyone directly linked to the latest Victorian cases, listing exposure sites where confirmed cases are known to have been. The move followed Tasmania's declaration of Greater Sydney and the Wollongong area south of Sydney as medium-risk zones, requiring travelers to quarantine for 14 days on arrival, while those from Sydney's northern beaches are barred from entering.

Victoria reported three new cases Sunday. In total, there have been 21 locally acquired Victorian cases over recent days, all linked to the New South Wales outbreak. Victoria's border is now closed to all travelers from New South Wales.

On Sunday, New South Wales recorded eight new local cases. There are 161 active cases in the state, most of them in the northern beaches of Sydney, and 13 emanating from a liquor store.

BEIJING — Chinese officials have tested more than 4.4 million residents in the northeastern city of Shenyang after the discovery of a new coronavirus cluster there but confirmed only four cases.

Another case was reported Sunday in a different city in Liaoning province. China reported 11 new domestically transmitted cases on Sunday — five in Liaoning, four in in northeastern Heilongjiang province, one in Beijing and one in Hebei province, just outside of Beijing.

Authorities across China are on high alert as new cases continue to emerge. The city of Heihe in Heilongjiang province suspended bus and taxi services after it reported four new cases. It has also temporarily shut down all business venues in the city except for markets and sealed off residential communities.

PHOENIX — Arizona's Gov. Doug Ducey has rejected the state's top education official's call for Ducey to order public schools to use only online instruction for the next two weeks unless they have waivers from health officials.

Amid a coronavirus surge in the state, Superintendent of Public Instruction Kathy Hoffman said Saturday that schools need a two-week "quarantine period" while educators and local officials review health data and decide what type of instruction is appropriate for their communities.

A spokesman for the governor said Ducey wouldn't issue the order because how schools open is a local decision.

Many schools in Arizona are set to resume classes in the coming week after the winter holidays.

New York reached that figure as it reported about 15,000 new positive tests on Friday. Experts say the official number of coronavirus cases represents a significant undercount, since many people in the New York City area were infected with the coronavirus last spring when testing was largely unavailable.

New York is the fourth state to report more than 1 million positive COVID-19 tests after California, Texas and Florida.

The figures reported late Friday increased the tribe's totals since the pandemic began to 23,429 cases and 813 confirmed deaths.

The number of infections is considered far higher than reported because many people have not been tested, and studies suggest people can be infected without feeling sick.

The tribe's reservation includes parts of Arizona, New Mexico and Utah. The reservation was under a weekend lockdown that began Friday evening and ends Monday at 5 a.m.

LOS ANGELES — Southern California funeral homes are turning away bereaved families because they're running out of space for the bodies.

The head of the California Funeral Directors Association says mortuaries are being "inundated."

One funeral home is averaging 30 body removals a day, about five times more than usual. Mortuary owners are calling each other to see if anyone can handle overflow, and the answer is always the same - they're full.

Los Angeles County, the epicenter of the crisis in California, has surpassed 10,000 COVID-19 deaths. On Friday, California reported a record 585 coronavirus deaths.