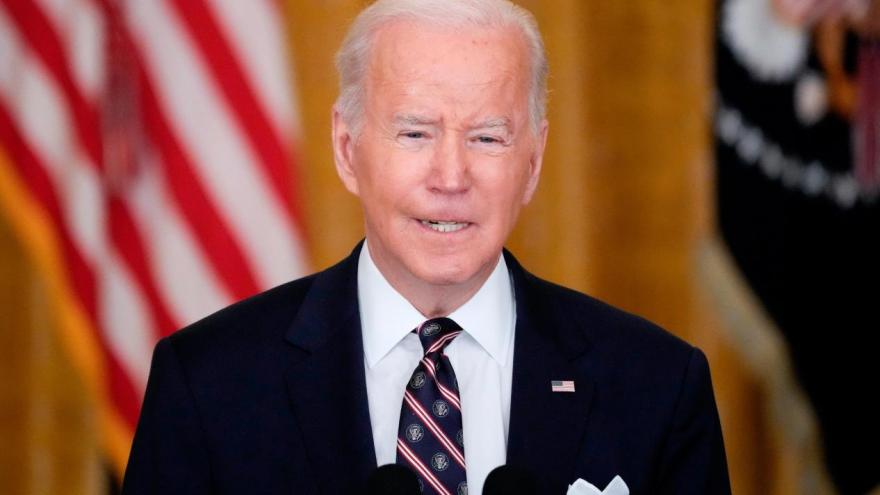 The United States on Wednesday unveiled its latest round of sanctions going after Russia over its war on Ukraine.

(CNN) -- The United States on Wednesday unveiled its latest round of sanctions going after Russia over its war on Ukraine, this time targeting a key commercial bank and "a global network of more than 40 individuals and entities led by U.S.-designated Russian oligarch Konstantin Malofeyev."

In addition, the State Department is imposing a slew of visa restrictions in response to the Russian war and for "undermining democracy in Belarus."

Wednesday's actions are the latest by the Biden administration meant to punish the Kremlin and its enablers for invading Ukraine at the end of February. The war has taken the lives of hundreds of service members and civilians, and US and European officials say it could last months. Experts who spoke with CNN have said that sanctions are unlikely to immediately deter Russian President Vladimir Putin against pursuing aggression in Ukraine.

The US previously sanctioned Malofeyev in December 2014 for funding "separatist activities in eastern Ukraine" and for his close links to "Aleksandr Borodai, Igor Girkin (a.k.a. Igot Strelkov), and the so-called Donetsk People's Republic, which have all been previously sanctioned as Specially Designated Nationals (SDNs)," according to a Treasury release from the time.

Earlier this month, the US Department of Justice unveiled its first criminal charges since Russia's war in Ukraine began against Malofeyev, indicting him for sanctions evasion attempts.

Malofeyev was again sanctioned by the US on Wednesday "for having acted or purported to act for or on behalf of, directly or indirectly," the government of Russia. The Treasury Department also sanctioned members of Malofeyev's "vast global network of cut-outs and proxies to attempt to evade sanctions and conduct malign influence activities," including those involved in pro-Kremlin propaganda. Those sanctioned include entities in Russia, Moldova, Singapore, and a number of Russian individuals, inclding Malofeyev's son.

The Treasury Department also went after "Public Joint Stock Company Transkapitalbank (TKB)" for being "at the heart of sanctions evasion" and its subsidiary, as well as companies in Russia's virtual currency mining industry.

"The United States is committed to ensuring that no asset, no matter how complex, becomes a mechanism for the Putin regime to offset the impact of sanctions," the release issued Wednesday said.

In a separate statement Wednesday, US Secretary of State Antony Blinken said the State Department is imposing visa restrictions on 635 Russian individuals, including members of the Russian Duma and "ten purported 'authorities' of the so-called Donetsk People's Republic and Luhansk People's Republic."

"We will use every tool to promote accountability for human rights abuses and violations of international humanitarian law in Ukraine," Blinken said.

Rizzo told CNN that the US could recognize Russia as state sponsors of terrorism -- a process underway at the State Department. US Ambassador to the United Nations Linda Thomas-Greenfield noted in an interview with SABC News Wednesday that actions against Russia "will certainly increase, should that state sponsorship go through."

There is also the potential of a total ban on Russian energy. Inaction in this space is a major pitfall because Russia's revenue from its global oil and gas sales is keeping its economy afloat and allowing the Kremlin to finance the Ukraine War, some sanctions experts have argued.

The Biden administration has banned Russian energy imports by the US, but it has not imposed sanctions on countries that still import Russian energy or moved to prevent the Russian energy revenue from being funneled into the Ukraine war.

"Russia's oil and gas sales have not been impeded all that much by sanctions so Russia is still making about a billion dollars a day selling energy around the world," said Edward Fishman, another senior fellow at the Atlantic Council. "It continues to generate significant new revenues every day, which gives Russia a pretty significant financial runway. They can continue funding the war and they can continue funding government budgets."

The US has applied strict energy sanctions to one country in the recent past: Iran. Experts say that using the Iran oil sanctions as a model could be effective because it wouldn't send sudden shock waves through the global economy, particularly in European countries that are currently reliant on Russian oil.

"If you were to use the Iran sanctions as a model, the US policy of trying to reduce Iran's oil exports over time, so it didn't go from 100% to 0%. It was phased in. So it's certainly plausible that you could have a similar phase-in, probably over a longer time period, of forcing the world to cut down on Russian energy," said Christopher Miller, assistant professor of international history at Tufts.

"I don't think we should treat it as a light-switch-on, light-switch-off type of question, because there are intermediate steps along the way that that you can move towards that would limit the impact on the oil market, and make the cost something that Western leaders be willing to bear."

The Biden administration is working with countries that are still reliant on Russian energy to develop alternatives, administration officials say. They make the case that they are managing this effort in a way that works for European allies -- without sanctioning close partners who have been effective in rolling out sanctions on Russia.

There have been commitments from European countries to phase out Russian energy. The EU proposed a ban on Russian coal by August and Germany plans to phase out oil imports by the end of the year.

But other experts note that the shift by European countries may not come quickly enough if their feet are not held to the fire.

"Germany banning imports by year end provides a lot of time for Russia to adjust and find other buyers -- such as China and India -- who are not planning to cut oil imports from Russia," Miller said.

Sanctions experts also say that there is more runway when it comes to a few different areas such as non-financial Russian firms.

Overall, there are signals the Russian economy is already hurting because of the sanctions. The chairwoman of the Russian central bank warned lawmakers in recent days that sanctions "will now begin to increasingly affect the real sectors of the economy" and noted that "practically every product" manufactured in Russia relies on imported components, according to the White House.

However, there is a sense among experts that Putin will not immediately change his behavior due to sanctions.

"As the Russian economy shrinks because of these (sanctions), Putin will have fewer resources at his disposal to use to wage the war in Ukraine, and the hope is that that pushes him toward a certain behavior down the line. However, I don't think that these sanctions will have an immediate effect," Rizzo said.