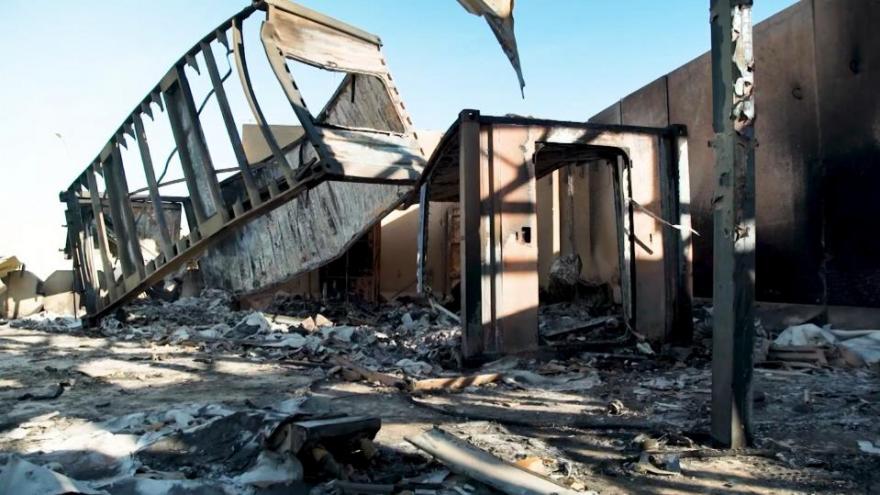 A picture of the destruction left at Al Asad base in Iraq after it was struck by Iranian missiles.

(CNN) -- Several US service members were injured during last week's Iranian missile attack on Al-Asad airbase in Iraq despite the Pentagon initially saying that no casualties were suffered.

"While no U.S. service members were killed in the Jan. 8 Iranian attack on Al Asad Air base, several were treated for concussion symptoms from the blast and are still being assessed," the US-led military coalition fighting ISIS in Iraq and Syria said in a statement Thursday.

"Out of an abundance of caution, service members were transported from Al Asad Air Base, Iraq to Landstuhl Regional Medical Center in Germany for follow-on screening. When deemed fit for duty, the service members are expected to return to Iraq following screening," the statement added.

Concussions are not always apparent immediately after they've been suffered, but the disclosure indicates that the impact of the attack was more serious than initial assessments indicated. The attack, launched in retaliation for the US airstrikes that had killed Iranian Gen. Qasem Soleimani, significantly ratcheted up tensions between Iran and the US, though the prospect of further military confrontation appears to have abated for now.

A US military official told CNN that 11 service members had been injured in the attack, which was first reported by Defense One. Following the attack, the Pentagon had initially said that no casualties had resulted from the 16 missiles fired by Iran. The US military defines a casualty as either an injury or fatality involving personnel.

Asked about the apparent discrepancy, a Defense official told CNN, "That was the commander's assessment at the time. Symptoms emerged days after the fact, and they were treated out of an abundance of caution."

After this story published, Capt. Bill Urban -- the spokesperson for US Central Command, which oversees troops in the Middle East -- said the military had learned after the attack that 11 individuals were injured -- eight were transported to Landstuhl Regional Medical Center in Germany and three were sent to Camp Arifjan in Kuwait for "follow-on screening."

"As a standard procedure, all personnel in the vicinity of a blast are screened for traumatic brain injury, and if deemed appropriate are transported to a higher level of care," Urban said in a statement. "All soldiers in the immediate blast area were screened and assessed per standard procedure, according to the Defense Department. ... When deemed fit for duty, the service members are expected to return to Iraq following screening."

A US military spokesman in Baghdad explained to CNN's Arwa Damon that the service members were medevaced to Kuwait and Germany because those facilities had the necessary equipment to diagnose the brain injuries.

Official US reports about the attack have shifted since it occurred.

"The current (Battle Damage Assessment) is, if you will, again, we can get you details, things like tentage, taxiways, the parking lot, a damaged helicopter, things like that; nothing that I would describe as major, at least as I note at this point in time. So that's the state of -- of the attack at this point as we know it. Most importantly, no casualties, no friendly casualties, whether they are US, coalition, contractor, etc.," Esper said.

A spokesperson for the Department of Defense told reporters Friday that Esper and the rest of the Pentagon leadership had only been made aware of the nature and severity of the injuries on Thursday, with Esper being told by the Vice Chairman of the Joint Chiefs of Staff, Gen. John Hyten, who interrupted a meeting Esper was in to relay the information.

"The Secretary was made aware of this yesterday afternoon, I was actually in a meeting with him upstairs and the Vice Chairman interrupted the meeting to give the secretary an update yesterday late afternoon, immediately directed us to get the information--get more details get the information out which we did, we did that last night," Pentagon spokesman Jonathan Hoffman said Friday.

The Defense Department and the coalition fighting ISIS did not respond to questions about the injuries for several hours on Thursday.

Hoffman said that part of the reason the casualties were not immediately reported was the fact that many of those service members initially returned to duty in the wake of the attacks.

"Our understanding is these individuals were able to return to duty following the attacks and either they had concussion symptoms that appeared shortly after the attack and did not diminish and therefore they've been sent on for further evaluation or they had concussion symptoms that appeared later, only manifested later and therefore have caused medical personnel to move them onward for examination," he added.

Esper was not immediately informed of the injuries because regulations dictate that only a certain set of injuries are reported to the Secretary, according to another Pentagon spokesperson.

"Immediate reporting requirements up to the Pentagon are for incidents threatening of life, limb or eyesight, so actually (Traumatic Brain Injury) wouldn't rise to that threshold," Pentagon spokesperson Alyssa Farah said Friday.

US officials also have offered differing accounts of what they see as the motivations behind Iran's attack. Vice President Mike Pence said last week that the administration believes the strikes "were intended to kill Americans," and Army Gen. Mark Milley, the chairman of the Joint Chiefs of Staff, said he believed that the attacks "were intended to cause structural damage, destroy vehicles and equipment and aircraft, and to kill personnel."

But a growing belief emerged among administration officials last week that Iran had deliberately missed areas populated by Americans. Multiple administration officials told CNN that Iran could have directed its missiles to areas populated by Americans, but intentionally did not. And those officials said Iran may have chosen to send a message rather than take action significant enough to provoke a substantial US military response, a possible signal the Trump administration was looking for a rationale to calm the tensions.

Iraq did receive a warning that the strike was coming and was able to take "necessary precautions," according to a statement from Iraq's Prime Minister Adil Abdul Mahdi. A US defense official said that Iraq, in turn, warned the United States.

However, Pentagon officials have said they received no such warnings from the Iraqis but that the US was able to detect the attack in enough time to alert US forces on the ground.

"We said before we took our military action that we would choose the timing and the place, and we chose the place where the attack against Soleimani was initiated," Ambassador Majid Takht Ravanchi told CNN's John Berman on "New Day" last Friday when asked about Pence's comments. "And we do not consider a high number of casualties as an instrumental element in our calculations."

Earlier this week, the Trump administration abruptly canceled four classified congressional briefings related to the ongoing Iran crisis, in some cases providing little or no explanation for doing so.

UPDATE: This story has been updated with additional information on the attack and a statement from US Central Command.