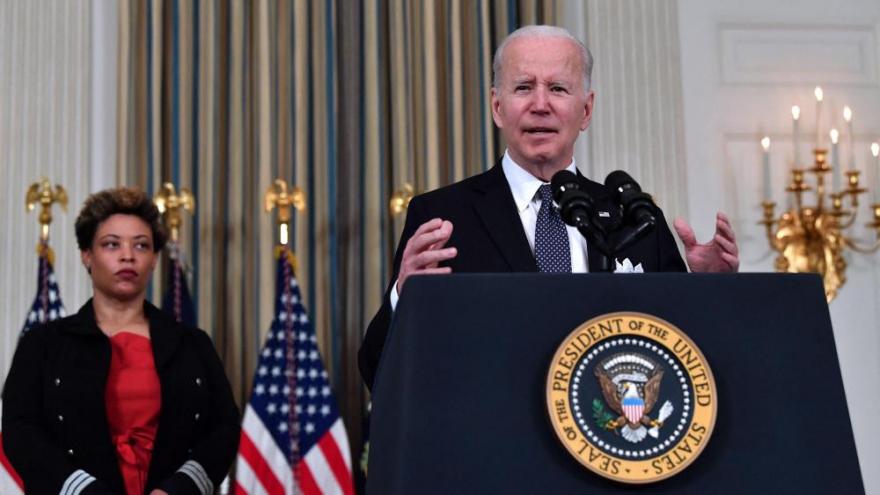 US President Joe Biden announces his Budget for Fiscal Year 2023 in Washington, DC on March 28. Biden said that US troops stationed in Poland have been "helping train the Ukrainian troops" in that country.

(CNN) -- US troops in Poland have been providing Ukrainians with some instruction on how to use the weapons the West has been shipping into Ukraine, sources familiar with the matter tell CNN.

President Joe Biden said on Monday that US troops stationed in Poland have been "helping train the Ukrainian troops" in that country. The troops were deployed there to help bolster NATO's eastern flank amid Russia's invasion of Ukraine.

The training is another way in which the US has aided the Ukrainian military while attempting to not directly engage Russian forces, which would potentially touch off a wider war.

Biden had heard from the troops while he was in Poland about how they were providing the tactical weapons training to the Ukrainians there, the sources said.

"We were talking about helping train the Ukrainian troops that are in Poland," Biden said on Monday. He was seeking to clarify a remark he made last week to US troops that they would be seeing "when you're there ... women, young people, standing in the middle of the damn tank, saying, 'I'm not leaving. I'm holding my ground.'"

A White House official told CNN, "There are Ukrainian soldiers in Poland interacting on a regular basis with US troops, and that's what the President was referring to."

The sources told CNN that while US troops are indeed providing some instruction to the Ukrainians at a military base in Poland, it does not amount to "formalized" training.

Rather, the coaching is more tactical and in-the-moment, the sources explained. That includes showing the Ukrainian soldiers picking up the weapons shipments in Poland how to use some of that equipment, like the Javelin anti-tank missiles that the West has been sending in large numbers. Poland has become the central transit point of arms transfers into Ukraine.

The US has allocated $1 billion in security assistance to Ukraine in the last month alone, and intends to provide Ukraine's armed forces with more than 9,000 shoulder-fired anti-tank weapons, including Javelins; nearly 7,000 small arms including machine guns and grenade launchers; 20 million rounds of ammunition; and 100 armed drones.

"These are direct transfers of equipment from our Department of Defense to the Ukrainian military to help them as they fight against this invasion," Biden said earlier this month. "We're going to continue to do more in the days and weeks ahead."

NATO Supreme Allied Commander Gen. Tod D. Wolters told US lawmakers on Tuesday that the US had been providing "advice and assistance with respect to materiel" going into Ukraine, but that the US forces are not "in the process of currently training military forces from Ukraine in Poland."

"There are liaisons that are there that are being given advice, and that is different than what I think you are referring to with respect to training," Wolters told Republican Sen. Tom Cotton of Arkansas when asked about the training.

Wolters said separately during the hearing that "as you well know we've made dramatic improvements in our information sharing and intelligence sharing, and as [the Ukrainians] continue to pursue their campaign, our advice and our assistance with respect to material will be very, very important," Wolters said.

While the US and NATO have so far ruled out sending any troops into Ukraine, on top of the tactical military training there has been robust intelligence sharing going on between the US and Ukrainian forces, CNN has previously reported.

In most cases, two sources familiar with the sharing system said, the intelligence being shared involves information about Russian force movements and locations, as well as intercepted communications about their military plans.