US travel restrictions go into effect to combat coronavirus spread 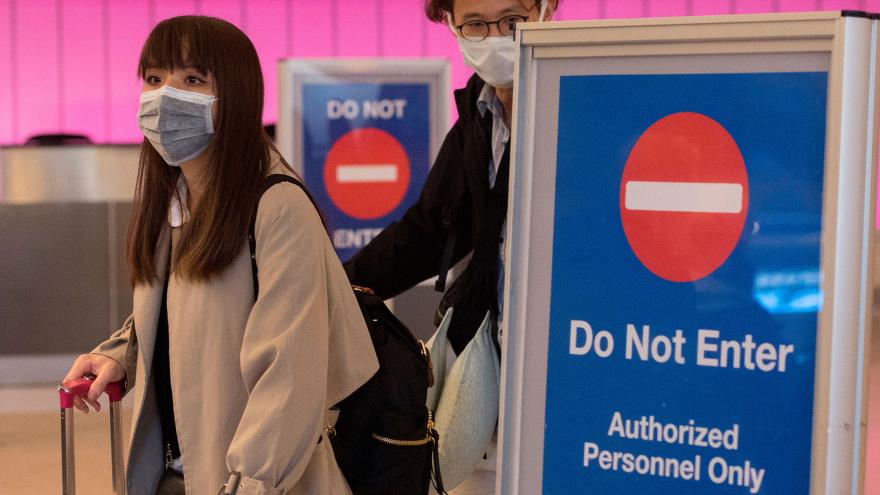 US Secretary of Health and Human Services Alex Azar takes questions during a briefing with members of the president's Coronavirus Task Force. The US will implement stringent travel restrictions Sunday evening in an effort to contain the novel coronavirus outbreak

(CNN) -- The United States began implementing stringent travel restrictions Sunday evening in an effort to contain the novel coronavirus outbreak that has so far killed more than 300 people in China and infected more than 16,600 worldwide.

The plan, which went into effect at 5 p.m. ET, includes temporarily denying entry to foreign nationals who visited China in the 14 days prior to their arrival to the United States, Health and Human Services Secretary Alex Azar said Friday.

Restrictions also apply to US citizens who have been in China's Hubei province, the epicenter of the coronavirus outbreak, in the two weeks prior to their return to the United States. Upon their return, those citizens will be subject to a mandatory quarantine of up to 14 days, he said.

US citizens returning from the rest of mainland China in the 14 days prior will undergo health screenings at selected ports of entry and face up to 14 days of self-monitored quarantine.

Azar outlined the restrictions Friday as he declared the coronavirus a public health emergency in the United States, stressing that "the risk to the American public remains low at this time, and we are working to keep this risk low."

That sentiment was echoed by national security adviser Robert O'Brien, who told CBS' "Face the Nation" on Sunday, "Right now there is no reason for Americans to panic" regarding the coronavirus. O'Brien added, "This is something that is a low risk, we think, in the US."

The Department of Homeland Security announced it would begin enforcing the restrictions Sunday.

Initially, DHS said Americans who have recently been to China would be rerouted to one of seven airports -- John F. Kennedy in New York, Atlanta, Chicago O'Hare, San Francisco, Seattle-Tacoma, Los Angeles and Honolulu -- where the CDC will conduct health screenings. DHS later expanded the list to include four more airports -- Dallas, Detroit, Newark and Washington's Dulles.

If travelers who spent time in China show no symptoms, DHS said, they will be sent to their final destination and asked to quarantine themselves for up to 14 days in their homes.

The Transportation Security Administration also took steps to combat the spread of the coronavirus. The agency issued a new directive this weekend that requires airlines to ask passengers on flights from outside the United States whether they've been to mainland China in the past 14 days. All frontline employees will also be permitted to wear surgical masks.

The ninth confirmed case of novel coronavirus in the United States was identified Sunday as an adult woman who recently traveled to Wuhan, according to the Santa Clara County Public Health Department in California.

The patient is a visitor in Santa Clara County, health officials said, and arrived on January 23 to visit family. She has remained at home ever since, except to seek medical care twice. "She has been regularly monitored and was never sick enough to be hospitalized," the statement said.

The woman is the second case in Santa Clara County -- though officials said the two cases were unrelated -- and the fourth coronavirus case in the state of California.

The eighth confirmed case was identified Saturday as a student in his 20s at the Boston campus of the University of Massachusetts. The student had returned from Wuhan on January 29. He sought medical treatment after his return and has been isolated ever since. The few close contacts he had have been identified and monitored for symptoms.

The case poses no increased risk to other students on the schools' campus, the medical director of the Boston Public Health Commission told reporters Saturday. He's "doing quite well" in quarantine at his home and is being monitored by public health nurses.

Other coronavirus cases have been confirmed in Washington state, Arizona and Illinois. In total, according to the CDC, at least 241 patients in 36 states are under investigation. Among those, 114 tested negative and 121 had results pending.

Outside the United States, at least 362 people have died of the coronavirus, nearly all of them in China. The Philippines on Sunday announced the first reported death outside mainland China, a 44-year-old Chinese man who had flown into the country from Wuhan. There are 173 confirmed cases in more than 20 countries outside of China.

Second evacuation of US citizens planned

A second evacuation flight is set to carry US citizens out of of Wuhan, a US official with knowledge of the matter told CNN.

The flight should be ready for departure Monday, according to the official, as indicated in US Embassy Beijing's email to American citizens who are still in the central Chinese city where the virus originated.

The official said there might be an additional evacuation flight due to continued high demand from US citizens in Wuhan.

"I can't confirm the numbers yet, but this upcoming evacuation might not be the last," the official said said.

Last week the first chartered plane carrying nearly 200 US citizens -- including diplomats and their families -- arrived at March Air Reserve Base in Southern California.

The CDC ordered a federal 14-day quarantine for those citizens -- the first such order in more than 50 years.

The US travel restrictions prompted some airlines to expedite or expand their plans to suspend flights between the United States and China.

Delta Air Lines decided to suspended flights until April 30 beginning Sunday -- four days earlier than initially planned. Its last China-bound flight left Saturday and the last returning flight from China to the United States was due to leave Sunday.

In the meantime, American Airlines, which canceled all flights to mainland China on Friday, said Saturday it was canceling flights to Hong Kong through Monday and would make daily decisions on Hong Kong flights depending on the situation.

United Airlines announced Friday it would suspend flights from its hub cities in the United States and Beijing, Chengdu and Shanghai from February 6 to March 28. Select flights will operate until next week to "help ensure our US-based employees, as well as customers, have options to return home," it said in a statement.