US to raise naturalization application fees by $500 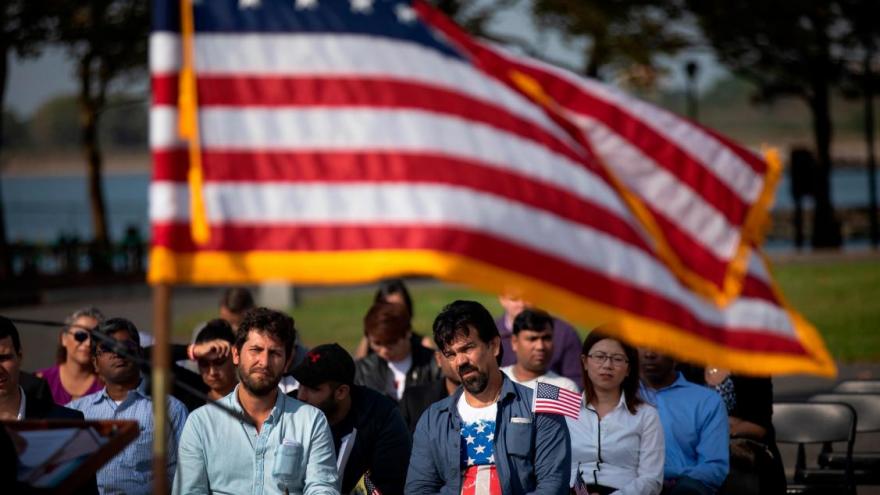 Immigrants wait to take the Oath of Citizenship during a naturalization ceremony at Liberty State Park, October 2, 2018 in Jersey City, New Jersey. 35 new citizens were naturalized at the ceremony hosted by U.S. Citizenship and Immigration Services (USCIS).

(CNN) -- The Trump administration is dramatically increasing fees for dozens of immigration and work applications, including a more than 80 percent increase on naturalization applications and a first-time fee for asylum applicants.

US Citizenship and Immigration Services, the agency responsible for the country's immigration and naturalization system, updated and finalized its fee structure after a nearly nine month review.

The agency increased the cost of online naturalization applications from $640 to $1,160. The naturalization fee will represent the full cost to process the application, the agency says, plus a proportional share of overhead costs, a change from previous policy.

There will also be a $50 fee for asylum seekers.

Historically, asylum seekers around the world are not subject to application fees, according to the Migration Policy Institute. The US will join only three other countries -- Australia, Fiji, and Iran -- imposing asylum fees.

The announcement comes as the agency is facing a significant budget shortfall and looming furloughs. USCIS closed offices and paused services due to the Covid-19 pandemic, prompting a request for $1.2 billion in emergency funds from Congress. Unlike most federal agencies, USCIS receives most of its funding from fee collection.

However, the new fees, which are assessed by law every two years, are unrelated to the current budget shortfall, according to a USCIS spokesperson. The agency faced a loss of approximately $4.1 million per business day before the pandemic, the spokesperson added.

"These overdue adjustments in fees are necessary to efficiently and fairly administer our nation's lawful immigration system, secure the homeland and protect Americans," said Joseph Edlow, USCIS deputy director for policy, in a statement. Edlow runs the day-to-day operations of the agency.

USCIS, a part of the Department of Homeland Security, has been at the center of some of the administration's most hardline immigration policies, most notably the controversial "public charge" rule, which was blocked by a court earlier this week. Acting Homeland Security Deputy Secretary Ken Cuccinelli brought the agency into a rare spotlight when he served as the acting USCIS director, working to rebrand it as an vetting agency, rather than a benefits agency. Trump administration policy changes at USCIS have brought the ire of immigration activists, lawmakers and the agency's own union members.

USCIS, which oversees the Deferred Action for Childhood Arrivals program, did remove a proposed $275 renewal fee for DACA recipients.

Earlier this week, the Trump administration announced it will not accept new applications for the Obama-era program that shields from deportation certain undocumented immigrants who came to the US as children. And, the administration said it will limit renewals to one year instead of two while it reviews the program.

DACA fees for employment authorization and biometric services will remain at 2017 levels..

Additionally, USCIS lowered its proposed genealogy fees, which included an increase for historical records of deceased immigrants who came to the United States between the late-19th and mid-20th centuries.

Under the USCIS Genealogy Program, anyone who's interested can obtain naturalization certificates, alien registration forms, visa applications and other records of immigrants from the late 1800s to the mid-1950s.

A group of genealogists, historians and records-access advocates organized a public campaign to persuade the USCIS not to hike the fees.