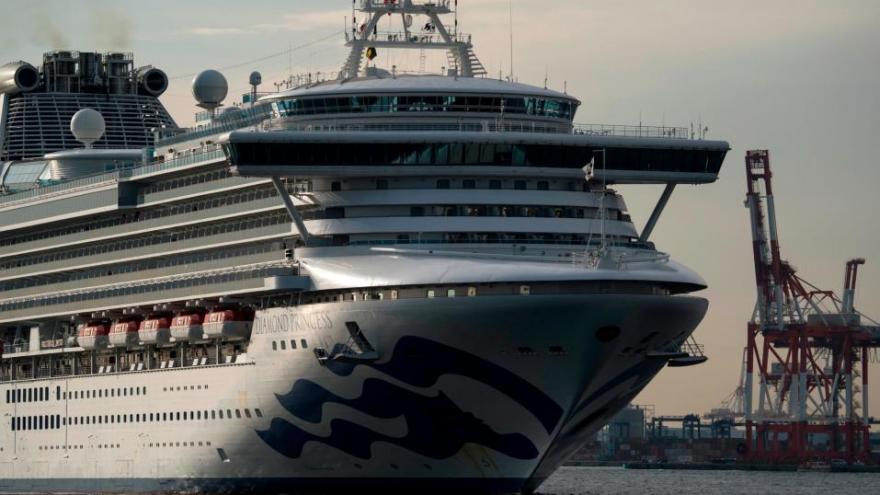 There has been one death and 334 confirmed cases of the coronavirus in Japan, 286 of which are from the Diamond Princess cruise ship that is currently docked in Yokohama Bay under quarantine.

(CNN) -- The US government is preparing to evacuate Americans who have been quarantined on a cruise ship in Japan for over a week, after dozens of people on board tested positive for the novel coronavirus earlier this month.

The US embassy in Tokyo on Saturday sent an email to Americans on board the Diamond Princess cruise ship detailing plans for a voluntary evacuation for US citizens and their immediate family from the ship to take place Sunday evening local time.

The Wall Street Journal first reported on the US' plans.

Over 3,600 people, including 428 Americans, have been stuck on the cruise ship docked in Yokohama since February 4 in what has become the largest outbreak of the virus outside of mainland China. At least 24 Americans are among the 219 people infected with coronavirus aboard the Diamond Princess cruise.

The email from the US embassy, obtained by CNN from a passenger onboard the ship, says that the US government "recommends, out of an abundance of caution, that US citizens disembark and return to the United States for further monitoring."

Those who choose to return to the United States on the charter aircraft will be required to undergo another 14 days of quarantine. "We understand this is frustrating and an adjustment, but these measures are consistent with the careful policies we have instituted to limit the potential spread of the disease," the email reads.

Charter aircraft will arrive in Japan in the evening of February 16, according to the email. Buses will transport the Americans directly from the Yokohama port to an unspecified airport.

Passengers choosing to return on the charter flight will be screened for symptoms of the virus.

Americans who have already tested positive for coronavirus, as well as those showing symptoms of the virus, will not be able to board the aircraft, and will continue to receive treatment in Japan.

Roughly 380 Americans and their families on the ship will be offered seats on two charter planes to the US organized by the State Department, Henry Walke, director of the Centers for Disease Control and Prevention's Division of Preparedness and Emerging Infections, told the Journal on Friday.

Those who choose not to take the charter flights "will be unable to return to the United States for a period of time," which the CDC will have final say in the matter.

The Japanese government said Saturday that it "appreciates" the US' decision to offer voluntary evacuation to American citizens onboard the Diamond Princess.

Other passengers on the Diamond Princess will be disembarked over several days beginning February 21, and the crew will likely begin their own quarantine once all passengers have left the ship, Jan Swartz, president of Princess Cruises, told passengers in a letter read by the ship's captain.

Passengers who have met the Japanese Ministry of Health's criteria for being at high-risk of getting infected with the virus have been allowed to disembark from the ship and spend the remainder of their quarantine ashore in Japanese government housing.

Since it was first detected in Wuhan, China, in December, the novel coronavirus, officially known as Covid-19, has killed more than 1,500 people and infected more than 67,000 people globally, the vast majority in mainland China.