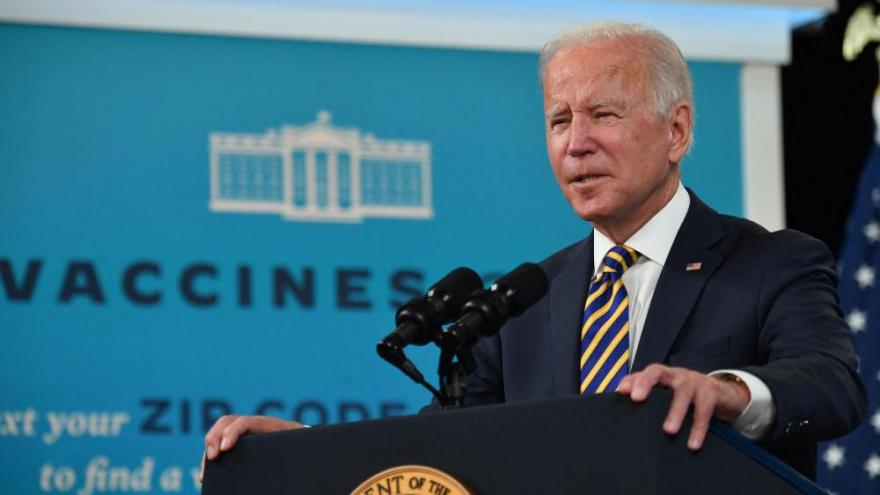 The US will donate more than 17 million doses of the Johnson & Johnson Covid-19 vaccine to the African Union, President Joe Biden announced in Washington, DC on October 14.

(CNN) -- The US will donate more than 17 million doses of the Johnson & Johnson Covid-19 vaccine to the African Union, President Joe Biden announced on Thursday.

Biden made the announcement when he met with President Uhuru Kenyatta of the Republic of Kenya on Thursday afternoon at the White House. The 17 million doses will be delivered to the African Union in the coming weeks, a senior administration official said. This donation is in addition to the 50 million doses the US has already sent to the African Union. Kenyatta is the first African leader Biden has welcomed to the White House during his presidency.

The Johnson & Johnson vaccine is highly valued in Africa because of its single-dose vaccination style and flexibility in storage and transport. The official noted the J&J vaccine is in high-demand and short-supply in Africa.

The move is part of the President's effort to reassert US leadership on the world stage and help countries around the world struggling with Covid-19 outbreaks combat the pandemic. It will also serve to counter efforts by Russia and China to use their own state-funded vaccines to expand their global influence.

Biden announced last month the US was purchasing an additional 500 million Pfizer Covid-19 vaccines to donate to low- and lower-middle-income countries around the world, bringing the total number of vaccines the US has pledged to donate to more than 1 billion. These vaccines will be distributed through Covid-19 Vaccines Global Access, the global vaccination program known as COVAX.

The President has also called on other world leaders to increase their vaccine donations to countries that need them the most to help end the pandemic. He has also called on governments and international institutions to help solve the global oxygen crisis and make tests and therapeutics more readily available.

The donations come as many fully vaccinated Americans get booster Covid-19 shots. Last month, the US Food and Drug Administration said it would grant emergency use authorization for a booster dose of Pfizer's Covid-19 vaccine in people 65 and older, people at high risk of severe disease and people whose jobs put them at risk of infection

The executive director of the World Health Organization's health emergencies program, Mike Ryan, has criticized the US distributing booster shots, arguing vaccines need to be prioritized for those in other parts of the world who haven't had any Covid-19 shots yet.

White House officials have pushed back on the criticism and said they can provide booster shots while also continuing its efforts to help vaccinate the globe. Officials like White House Covid-19 response director Jeff Zients and US Surgeon General Vivek Murthy have stressed the importance of doing both at the same time in order to end the global pandemic.

In addition to the vaccines, Biden has said $2 billion in US contributions would go toward a global coronavirus vaccine initiative and would provide support to COVAX. He also pledged an additional $2 billion in funding contingent on contributions from other nations and dose delivery targets being met.

A new era of diplomacy with Africa

Kenya was specifically chosen for Biden's first in-person meeting with an African leader, a separate senior administration official said, due to its position as a key strategic partner in the region on issues of import to the US.

"Kenya is a strong bilateral partner and a leader on regional and global issues," that official said, adding that the US will work closely with the nation on advancing peace and security, defending democracy, strengthening financial transparency, economic growth and climate change.

The meeting "demonstrates, really, a new era of US partnership with Africa that is based on principles of mutual respect and equity," this official added, in contrast to Biden's predecessor, who described some African nations as "shithole countries."

Kenya is also crucial to key security issues in what the second official described as the "very fragile Horn of Africa region," adding that Kenya "can play an important role in countering al Shabaab in Somalia, as well as deescalating the conflict in Ethiopia." Last month, Biden signed an executive order authorizing broad sanctions against those involved in perpetrating the ongoing conflict in Ethiopia as reports of atrocities continue to emerge from the Tigray region.

The second official was also asked about the Pandora Papers exposé by the International Consortium of Investigative Journalists that indicated Kenyatta's family has been accumulating a fortune in offshore tax havens for decades. The Pandora Papers show the family owned at least seven entities based in the British Virgin Islands and Panama, two well-known tax havens, the ICIJ said, with assets worth more than $30 million.

The leaders, the second official said, "will be discussing strengthening financial transparency."

Pressed again, the second official added, "President Biden definitely engages with a range of leaders, and in advancing his foreign policy priorities, foremost amongst which are absolutely to address and combat corruption. And so, in the meeting today, we can expect that the President will again reinforce the need to bring transparency and accountability to domestic and international financial systems," later calling the meeting "an opportunity to convey our concerns and to encourage additional support and action on behalf of the Kenyans to ensure financial transparency."

Biden will also be hosting a democracy summit later this year, the second official noted, and Kenya is expected to attend, as well as other African countries.