US to announce new sanction package on Russia on Wednesday 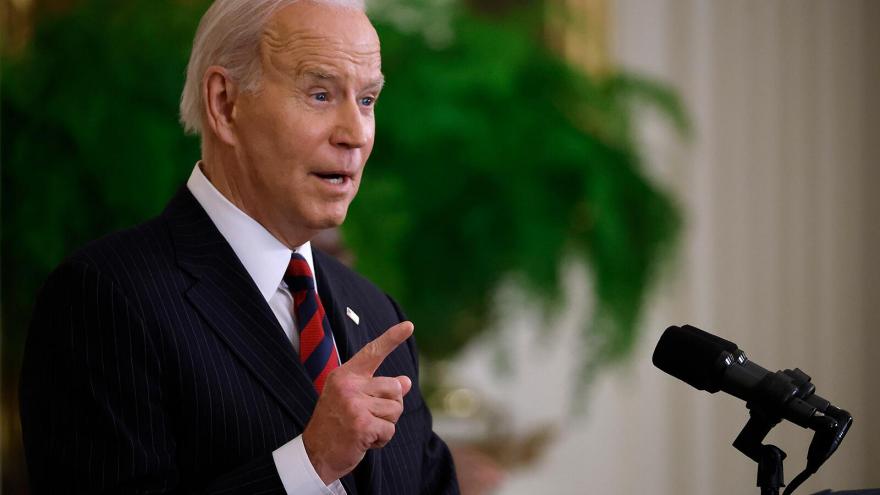 The US will announce new sanctions on Russia Wednesday in coordination with Group of 7 nations and the European Union, according to an administration official.

(CNN) -- The US will announce new sanctions on Russia Wednesday in coordination with Group of 7 nations and the European Union, according to an administration official.

The official said the sweeping package "will impose significant costs on Russia and send it further down the road of economic, financial, and technological isolation."

The new sanctions package will ban all new investment in Russia, increase sanctions on financial institutions and state-owned enterprises in Russia, and sanction Russian government officials and their family members.

A Western official familiar with the plans said the US could apply sanctions on Russian President Vladimir Putin's adult children -- he has acknowledged two daughters -- as early as Wednesday. The Biden administration is also eyeing an expansion of sanctions on Sberbank, Russia's largest financial institution, and Alfa Bank, another large lender, that official said.

The new sanctions package will mark the latest escalation in efforts by the US and its allies to impose costs on Russia for its invasion and, over time, cut off critical economic sectors the country utilizes to wage the ongoing war. They also follow new revelations of further atrocities committed by Russian forces in northern Ukraine, with the images of the atrocities committed in Bucha serving as an accelerator to ongoing discussions between the US and its European allies to ramp up the economic costs, officials said.

"These measures will degrade key instruments of Russian state power, impose acute and immediate economic harm on Russia, and hold accountable the Russian kleptocracy that funds and supports Putin's war," the administration official said. "These measures will be taken in lockstep with our allies and partners, demonstrating our resolve and unity in imposing unprecedented costs on Russia for its war against Ukraine."

The official added, "We had already concluded that Russia committed war crimes in Ukraine, and the information from Bucha appears to show further evidence of war crimes. And as the President said, we will work with the world to ensure there is full accountability for these crimes. One of those tools is sanctions -- and we have been working intensively with our European allies on further sanctions."

The expected sanctions come after the US Treasury announced it will no longer allow Russia to pay down its debt using dollars stockpiled at American banks. While Washington had imposed sanctions on the Russian Central Bank freezing their foreign currency at US banks, the Treasury Department had previously allowed Russia to use those reserves to repay its debt.

It's a move that officials say will substantially raise the risk of default and undercut urgent efforts by the central bank to stanch the economic bleeding that immediately arrested the Russian economy in the wake of the Western response to the invasion.

Since Russia's invasion of Ukraine started at the end of February, the US and its allies have sanctioned hundreds of Russian elites and lawmakers, restricted the country's access to Western technology important to its defense and technology sectors, frozen roughly half of Russia's foreign reserves and cut off specific Russian banks from the SWIFT banking network, among other steps. The US has also banned the import of Russian oil, natural gas and other energy products.

While the severity and swiftness of the Western sanctions against Russia have been unprecedented, key carve outs remain as US officials continue to monitor US and European supply chains and try to limit the impact of sanctions on Western economies that are grappling with record-high inflation levels.

CNN reported late last week that Russia faces a deep recession and high inflation as sanctions push the country toward having an increasingly closed economy, a shift which US officials believe the Kremlin will struggle to make since it has long relied on the sale of raw materials to buy sophisticated equipment and consumer goods.

Sanctions 'will take time' to 'grind down' Russian economy

While the US and its allies have imposed the most sweeping sanctions regime targeting a country of the size of Russia in history, officials acknowledge it has done little to shift Putin's calculation.

The threat of the sanctions didn't deter the invasion itself, and the piling on of economic penalties hasn't brought Russia any closer to a withdrawal or negotiated settlement since.

Yet the administration's sanctions policy, which is led by a bevy of veterans involved in the response to the last Russian incursion into Ukraine in 2014, is calibrated to cut off critical components of the Russian economy over time and, perhaps most importantly, in a unified and multilateral way.

The overarching intent to maintain unity with the more than 30 countries across four continents that have joined in the sanctions has limited their reach on the central driver of the Russian economy: Energy.

The reliance of EU members on Russian oil and gas has constrained the scale of the sanctions targeting the energy sector, even as the US has moved on a unilateral basis to ban Russian oil imports. It has also created pressure to address rising energy prices across the world, which could create domestic tension that would undercut what has been a unified front up to this point.

Still, the brazen nature of the Russia attack has dramatically shifted the willingness of some European leaders to sign on to expanded economic penalties. The EU is now planning to ban Russian coal imports, and despite some continued resistance, a move to expand an embargo to include oil and gas has continued to gain steam, officials said.

Yet for all of the focus on the immediate impact on the sanctions, officials point to key pieces of their efforts as having the greatest effect as the conflict grows more protracted. Export controls targeting critical economic sectors are designed t cut ooff access to the technology necessary for the Russian industrial base to continue production in defense, aerospace and biotechnology.

Sanctions targeting the central bank will, over time, systematically undo years of Russian efforts to insulate its economy through foreign currency reserves that are now either frozen, or have to be urgently tapped in order to avoid a looming default.

Expanding individual sanctions beyond key Russian officials and financiers to include family members as well is intended to cut off key avenues to shield wealth from new penalties.

"It will take time to grind down the elements of Russian power within the Russian economy, to hit their industrial base hard, to hit the sources of revenue that have propped up this war and have propped up the ... kleptocracy in Russia," Jake Sullivan, Biden's national security adviser, told reporters on Monday. "But there's no better time than now to be working at that so that the costs end up setting in and that ends up sharpening Russia's choices."

The US Treasury Department on Tuesday sanctioned what it called Russia's "most prominent" dark web market, a place where cybercriminals sold hacking tools and where millions of dollars in ransomware payments changed hands.

The sanctions coincided with a move by German police to shut down the computer servers of Hydra, as the dark web market is known, and seize $25 million in cryptocurrency.

Since emerging in 2015, the Hydra dark web market -- an internet-based network accessible through specialized software -- has been a haven for illicit commerce, according to researchers and US officials. Over $5 billion in Bitcoin transactions have taken place on Hydra, according to Elliptic, a firm that tracks cryptocurrency.

That includes about $8 million in ransom payments made to hackers that have deployed three prominent strains of ransomware in attacks on US companies.

"The global threat of cybercrime and ransomware that originates in Russia, and the ability of criminal leaders to operate there with impunity, is deeply concerning to the United States," Secretary of Treasury Janet Yellen said in a statement.

After a spate of ransomware attacks on US critical infrastructure last year, the Biden administration has looked to choke off sources of funding for cybercriminal gangs. The Treasury Department in September sanctioned Suex, a cryptocurrency exchange that US officials accused of doing business with hackers behind eight types of ransomware.