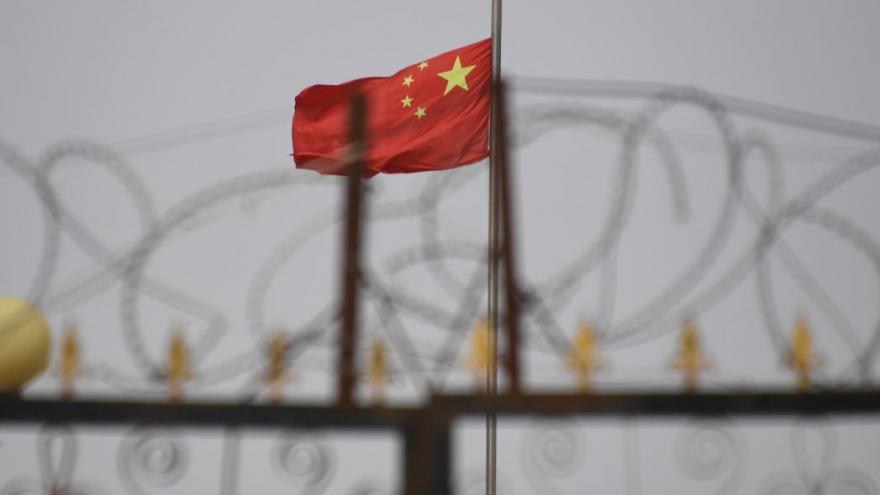 TOPSHOT - This photo taken on June 4, 2019 shows the Chinese flag behind razor wire at a housing compound in Yangisar, south of Kashgar, in China's western Xinjiang region. - A recurrence of the Urumqi riots which left nearly 200 people dead a decade ago is hard to imagine in today's Xinjiang, a Chinese region whose Uighur minority is straitjacketed by surveillance and mass detentions. A pervasive security apparatus has subdued the ethnic unrest that has long plagued the region

(CNN) -- The Trump administration has taken action against Chinese officials for their involvement in human rights abuses in the Xinjiang region, where Uyghur Muslims and other minority groups have been detained and tortured.

Those targeted include Chen Quanguo, the Communist Party secretary for the region.

On Thursday, the Departments of State and Treasury imposed sanctions on a number of officials, including Chen, Party Secretary of the Xinjiang Political and Legal Committee (XPLC) Zhu Hailun and the current Party Secretary of the Xinjiang Public Security Bureau (XPSB) Wang Mingshan. The move comes amid escalated tensions between Washington and Beijing.

"The United States will not stand idly by as the (Chinese Communist Party) carries out human rights abuses targeting Uyghurs, ethnic Kazakhs, and members of other minority groups in Xinjiang, to include forced labor, arbitrary mass detention, and forced population control, and attempts to erase their culture and Muslim faith," Secretary of State Mike Pompeo said in a statement announcing visa restrictions against the three officials, which block them and their families from entering the US.

According to the US State Department, the Chinese government has detained "more than one million Uyghurs, ethnic Kazakhs, Kyrgyz, and members of other Muslim minority groups" who are reportedly "subjected to torture, cruel and inhumane treatment such as physical and sexual abuse, forced labor, and death."

The top US diplomat recently condemned this "brutal campaign of repression" as "a human-rights violation on a scale we have not seen since World War II."

"The US decision is a serious interference in China's internal affairs and is a grave violation of international relations. And it is deeply detrimental to China-US relations. We reject and condemn that," Zhao told reporters.

In recent months, the Trump administration has increased its aggressive rhetoric and actions towards China on all fronts, including clamping down on Chinese media entities, going after Chinese pharmaceutical and research cybertheft and accusing the Chinese government of seeking to "remake the world" in its image.

Pompeo said he was "placing additional visa restrictions on other CCP officials believed to be responsible for, or complicit in, the unjust detention or abuse of Uyghurs, ethnic Kazakhs, and members of other minority groups in Xinjiang."

Under the designations, "all property and interests in property of the entity and individuals named above, and of any entities that are owned, directly or indirectly, 50 percent or more by them, individually, or with other blocked persons, that are in the United States or in the possession or control of U.S. persons, are blocked and must be reported to OFAC."

"The United States is committed to using the full breadth of its financial powers to hold human rights abusers accountable in Xinjiang and across the world," Treasury Secretary Steven Mnuchin said in a statement.

Regional experts noted that in the past the US has steered clear of going after CCP officials, making this round of sanctions significant.

"The US has often stopped short of targeting Chinese Communist Party officials and in this case you are finally seeing that is being done," said Olivia Enos, an expert at the Heritage Foundation. "The guy who is responsible for the severe human rights abuse is being held to account. This is huge."

Chen was the "architect" of the repressive polices pursued by Beijing in Tibet, which were then applied to the Xinjiang region and enabled "rapid internment," Enos explained.

In his statement, Pompeo said that Chen -- who is also a member of the Chinese Politburo -- "oversaw extensive abuses in Tibetan areas, using many of the same horrific practices and policies CCP officials currently employ in Xinjiang."

There has been wide congressional support for these sanctions on both sides of the aisle. The Uyghur Human Rights Policy Act was passed overwhelmingly in Congress and signed by the President last month.

"Beijing's barbarous actions targeting the Uyghur people are an outrage to the collective conscious of the world," House Speaker Nancy Pelosi said at the time. "This House of Representatives, in a very strong bipartisan way, we are sending a message to the persecuted that they are not forgotten. We're saying to the President of China: you may tell these people that they are forgotten, but they aren't."

The Uyghur Human Rights Project praised the targeted sanctions in a statement Thursday.

"At last, real consequences have begun. This comes at the 11th hour for Uyghurs," said UHRP Executive Director Omer Kanat,. "A global response is long overdue. Now there is finally action by one government. Will other countries wait until it is indeed too late?"

Other human rights groups are also calling on other countries to do more and target Chinese individuals in order for the sanctions to have the greatest impact.

"Putting sanctions on specific Chinese officials changes their calculations, but also that of other officials who would be put in these positions of power in the future," said Maya Wang, a China senior researcher at Human Rights Watch. "And that is why it is important for these sanctions to be coordinated among other governments because that would make them more effective in the future."