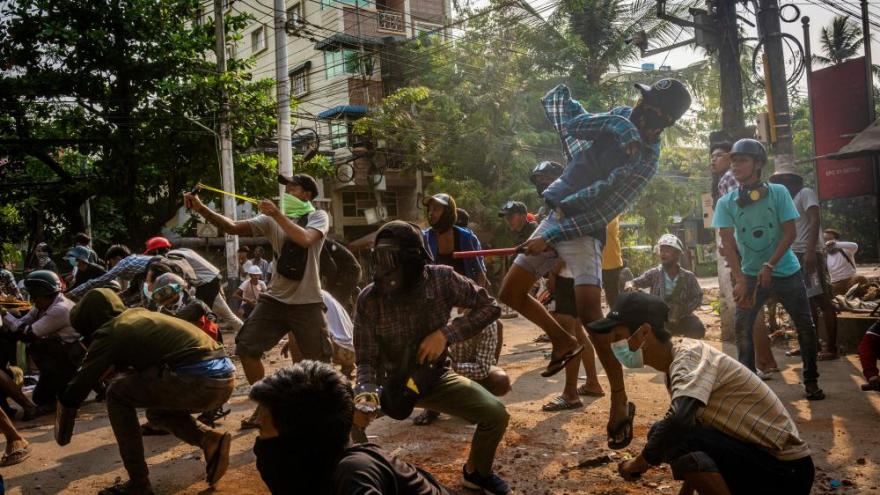 The Biden administration announced the suspension of all trade engagement with Myanmar on March 29 following a weekend of violence against pro-democracy protesters and the deadliest day since military seized power in a February 1 coup.

(CNN) -- The Biden administration announced the suspension of all diplomatic trade engagement with Myanmar on Monday following a weekend of violence against pro-democracy protesters and the deadliest day since military seized power in a February 1 coup.

The suspension of government-to-government engagement under the 2013 Trade and Investment Framework Agreement (TIFA) "will remain in effect until the return of a democratically elected government," a statement from the office of United States Trade Representative Katherine Tai said.

Under that agreement the US cooperated with Myanmar on trade and investment to support the country's integration into the global economy.

More than 100 civilians, including children, were killed in demonstrations protesting the military coup across Myanmar on Saturday, sparking international condemnation.

"Based on the reporting that I got, an awful lot of people have been killed totally unnecessarily," Biden told reporters Sunday in Delaware as he headed back to Washington.

Asked what the US response would be to the reported atrocities, Biden said, "We're working on that now."

The diplomatic trade suspension announced Monday will be effective "immediately."

"The United States supports the people of Burma in their efforts to restore a democratically elected government, which has been the foundation of Burma's economic growth and reform," Tai said in a statement, using another name for Myanmar.

Tai continued, "The United States strongly condemns the Burmese security forces' brutal violence against civilians. The killing of peaceful protestors, students, workers, labor leaders, medics, and children has shocked the conscience of the international community. These actions are a direct assault on the country's transition to democracy and the efforts of the Burmese people to achieve a peaceful and prosperous future."

The Karen National Union (KNU), the armed ethnic group that controls the southeastern region in Myanmar, told CNN that more airstrikes were conducted by Myanmar's ruling military Sunday after military jets killed at least two members of the KNU militia Saturday in a bombing raid near the border with Thailand and many civilians fled across the border. The US State Department has not responded to CNN's request for comment on the airstrikes.

Last week, Secretary of State Antony Blinken announced new sanctions against members of Myanmar's military, designating Myanmar's chief of police, Than Hlaing, and its Bureau of Special Operations commander, Lt. Gen. Aung Soe, as well as two army units "for being responsible for or complicit in or having directly or indirectly engaged or attempted to engage in, actions or policies that prohibit, limit, or penalize the exercise of freedom of expression or assembly by people in Burma," a statement from Blinken said.

The military seized power after claiming that November 8 elections, which were decisively won by political leader Aung San Suu Kyi's party, the National League for Democracy, had been marred by fraud. After the country's election commission disputed that claim, the military replaced the commission.

The coup marks a return to military rule, which stifled Myanmar for decades before a slim democratic opening began around 2010. As citizens of the country have taken to the streets to defend their election system with strikes and protests, the military has responded with increasing violence and efforts to stifle communications. Internet access has been restricted, journalists have been arrested and some newspapers have been barred from publishing.

CORRECTION: An earlier version of this story and headline incorrectly described the action taken by the US. The US is suspending diplomatic trade engagement with Myanmar established under the 2013 Trade and Investment Framework Agreement.