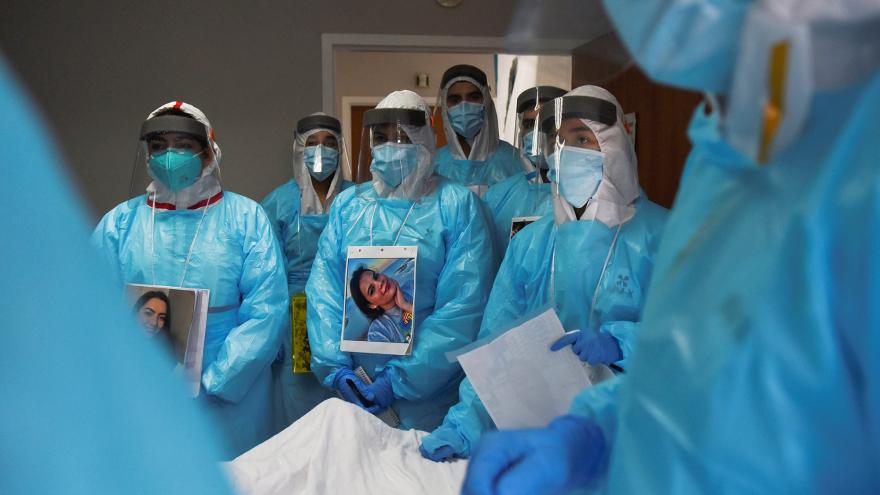 (CNN) -- The US surpassed 20 million total recorded Covid-19 cases on Friday, hours after the country ushered in 2021 and left behind its deadliest month of the pandemic.

The nation also has set a Covid-19 hospitalization record for four straight days. The high counts are a grim reminder that even with 2020 behind us, the pandemic continues to ravage parts of the country. And some leaders warn the worst is still ahead.

"We are still going to have our toughest and darkest days," Los Angeles Mayor Eric Garcetti told CNN on Thursday.

More than 125,370 coronavirus patients were in US hospitals Thursday, the fourth consecutive day that number set a record for the pandemic, COVID Tracking Project data shows.

Los Angeles County, as well as the state of California, have battled brutal surges of infections, hospitalizations and deaths in the past weeks, drivenin part by Thanksgiving gatherings, health officials said. Surging hospitalizations in the county are pushing hospitals to the "brink of catastrophe," said Dr. Christina Ghaly, its health services director.

In Atlanta, a convention center will again become an overflow field hospital starting Friday -- service it has given twice previously during the pandemic -- Georgia Gov. Brian Kemp's office said.

The number of Covid-19 patients in Georgia hospitals on a given day has more than doubled since mid-November, the tracking project's data shows. The convention center's beds will "help ensure that our hospitals continue to have the capacity they need for Covid and non-Covid patients," Kemp has said.

As of early Friday afternoon, the country had recorded a total of more than 20,007,000 Covid-19 cases, according to Johns Hopkins data. Going by official tallies, it took 292 days for the US to count its first 10 million cases, and just 54 more days to double it.

However, the actual pace of infections probably was different. Researchers have long said the number of infections likely is many millions higher, having been undercounted in part because of testing limitations. One US Centers for Disease Control and Prevention modeling study suggests as many as 53 million people in the United States might have been infected from February through September alone.

December was the deadliest month of the pandemic for the US, accounting for more than 77,500 of the country's 346,000 Covid-19 deaths, Johns Hopkins University data shows.

And experts have warned daily numbers could worsen nationwide in the coming weeks, with swells stemming from gatherings and travels over the holidays.

You asked, we answered: Your Covid-19 questions

Despite repeated calls from local and state leaders for people to celebrate with only members of their household, millions of Americans opted to spend time away from home. On Wednesday, the Transportation Security Administration reported its fourth-busiest day of the pandemic, screening more than 1 million people for the fifth straight day.

As the US wraps up its third week of vaccinations, Dr. Anthony Fauci made a major statement Friday about how they will proceed.

The US will continue giving two doses of the current coronavirus vaccines a few weeks apart, and will not follow the UK's decision to potentially delay second doses, Fauci told CNN senior medical correspondent Elizabeth Cohen.

"I would not be in favor of that," Fauci said when asked about the UK's new dosing plan. "We're going to keep doing what we're doing."

So far, the coronavirus vaccines approved in the US require two doses, taken a few weeks apart.

On Wednesday, the British government announced that the UK would prioritize giving the first dose of the Pfizer/BioNTech vaccine "to those in the most high-risk group" and allow the second dose to be given up to 12 weeks later.

The UK adopted that strategy to give as many people as possible the first dose as quickly as possible. Even the first shot, UK medical officers have argued, would afford some amount of protection.

Asked on Thursday by NBC's "Today" show if the US should adopt the UK's plan, Fauci had answered, "That's under consideration."

But he told CNN Friday that this comment had been misinterpreted.

Pfizer and Moderna, the makers of the two vaccines approved in the US, studied the effectiveness of two doses a few weeks apart, not a few months apart, noted Fauci, director of the National Institute of Allergy and Infectious Diseases.

"The fact is we want to stick with what the science tells us, and the data that we have for both [vaccines] indicate you give a prime, followed by a boost in 21 days with Pfizer and 28 days with Moderna. And right now, that's the way we're going with it, and that's the decision that is made," he said Friday.

"We make decisions based on data. We don't have any data of giving a single dose and waiting for more than the normal period of time" to give the second dose, he added.

When Fauci told NBC that following the UK's example was "under consideration," he meant that some people -- not US health authorities -- were talking about it, he told CNN Friday.

"It was somewhat of a misinterpretation. I think some -- not everybody -- but people misinterpreted when I said it's under consideration [as] like we're going to change. We're not," he said.

Experts say it will be months before vaccines are widespread enough to turn the course of the pandemic.

So far, more than 12.4 million vaccine doses have been distributed nationwide and more than 2.7 million have been administered. The rollout has been slower than many officials expected, but if the US is able to catch up in 2021, widespread vaccination could be possible starting in early spring,Fauci has said.

"Let's say in April, it will be what I call 'open season,' namely, anybody who wants to get vaccinated can get vaccinated," Fauci saidWednesday in an online conversation with California Gov. Gavin Newsom.

"If we then diligently vaccinate people in April, May, June, July, then we will gradually and noticeably get a degree of protection approaching herd immunity."

By the time early fall rolls around, Fauci said, "we will have enough good herd immunity to be able to really get back to some strong semblance of normality."

More states are reporting cases of a coronavirus variant that was first detected in the UK -- one that experts say is more transmissible than prior strains.

Florida health officials announced the state has evidence of its first case of the variant, in a man in his 20s with norelevant history of travel.

"The department is working with the CDC on this investigation. We encourage all to continue practicing Covid-19 mitigation," the state's health department wrote on Twitter.

In California, four men in San Diego County were discovered this week to have been infected with the variant, health officials there said Thursday. At least two of the men had no relevant, recent travel history, and the four are not believed to have interacted with one another.

The first known case of the variant in the US was identified in Colorado, in a man in his 20s who had no recent, relevant travel history.

Experts have said they expect there are likely many more cases across the country that have not yet been detected.

"An unknown travel history means that this person picked it up the community," Dr. Atul Gawande, a member of the Biden-Harris transition Covid-19 advisory board, previously told CNN.