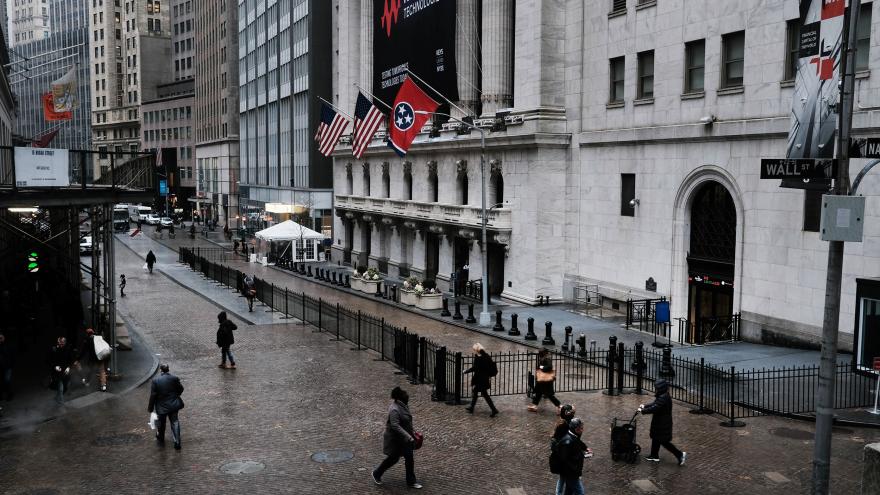 By Laura He, Clare Duffy and Julia Horowitz, CNN Business

(CNN) -- Global markets are plunging after the implosion of an alliance between OPEC and Russia caused the worst one-day crash in crude prices in nearly 30 years, fueling panic triggered by the escalation of the coronavirus epidemic.

The S&P 500 fell about 6%. The Dow fell as many as 2,046 points. The Nasdaq Composite was down 5.4%. The New York Stock Exchange halted trading for 15 minutes after stocks plunged more than 7%. They retraced some of their losses after the market reopened.

The yield on the 10-year Treasury note, meanwhile, fell below 0.5%, hitting record lows. The panic began after Saudi Arabia shocked oil markets by launching a price war. The kingdom is trying to retake global market share after Russia refused Friday to go along with OPEC's efforts to rescue the oil market from a plunge in demand caused by the coronavirus outbreak.

Making matters worse, the novel coronavirus continues to weigh heavily on investors as it deals an unexpected shock to the economy. The virus has infected more than 108,000 people and is throwing many countries into turmoil. Italy placed nearly 16 million people under semi-lockdown and the number of confirmed cases in Europe continues to rise.

European stocks plummeted in the opening minutes of trade. The FTSE 100 has plunged 8.5%, putting the index on track for its worst day since the global financial crisis in October 2008. Germany's DAX is down 7.4% and Italy's benchmark index fell 7.1%. Shares in BP crashed 20%.

US oil prices have nosedived 23% and were last trading at $31.84 a barrel, while the global benchmark Brent crude was down nearly 21%, trading at $35.88 a barrel. Both oil contracts are on track for their worst day since 1991, according to Refinitiv.

Investors are waking up "shell shocked," wrote Stephen Innes, chief market strategist at AxiCorp, in a Monday research note. He described the panic as "complete pandemonium."

The one-two punch of Saudi Arabia's oil price war and the deepening coronavirus fears in Europe added "another level of unwanted panic to a market already thick with fear," Innes said, noting that investors have begun piling into safe haven assets. The Japanese yen surged against the US dollar to its strongest level in more than three years, while gold briefly traded above $1,700 per ounce and hit its highest levels since 2012.

Wall Street has faced heavy losses for the past several weeks due to fears surrounding the coronavirus. During the last week of February, US stocks had their worst week since the financial crisis, and the economic disruption caused by the virus doesn't appear to be letting up.

Global markets have also been battered in recent days. About $9 trillion was wiped off global stocks in nine days, Bank of America said in a research note after US markets closed deep in the red again on Thursday.

The scale of the coronavirus outbreak spread rapidly in the United States last week. At least 33 states now have cases of the virus, and many major US companies have begun encouraging or allowing employees to work from home.

Dismal data out of China is also painting a gloomy picture for the world's second-largest economy. China's exports fell 17% in the January-to-February period compared to a year before, according to data released over the weekend. Imports fell 4%. The government blamed the declines on the Lunar New Year holiday and the coronavirus outbreak.

China also recorded its first trade deficit since its trade war with the United States began two years ago.

"The return to economic normality in China has been very slow since the coronavirus outbreak," wrote Louis Kuijs, head of Asia Economics at Oxford Economics, in a research note, pointing to the poor trade data and last week's surveys of activity in the country's manufacturing and services sector.

Oxford Economics now expects China's economic growth to contract 2% in the first quarter compared to the prior quarter, though Kuijs wrote that there should be a "robust recovery" through the rest of the year.

Kuijs wrote that the situation should "turn the corner" soon as people return to work and companies catch up on lost activity. But others pointed to the spread of the coronavirus overseas as a continued cause for concern.

"China may slowly be returning to work, but manufacturers will now likely be facing an international fall in demand," wrote Jeffrey Halley, senior market analyst for Asia Pacific at Oanda.

-- Matt Egan contributed to this report.

Joe Biden sweeps the night and wins Florida, Illinois and Arizona to extend his delegate lead over Bernie Sanders

Today 44° Windy with times of sun and clouds