US stars Sloane Stephens and Frances Tiafoe cause upsets at Wimbledon 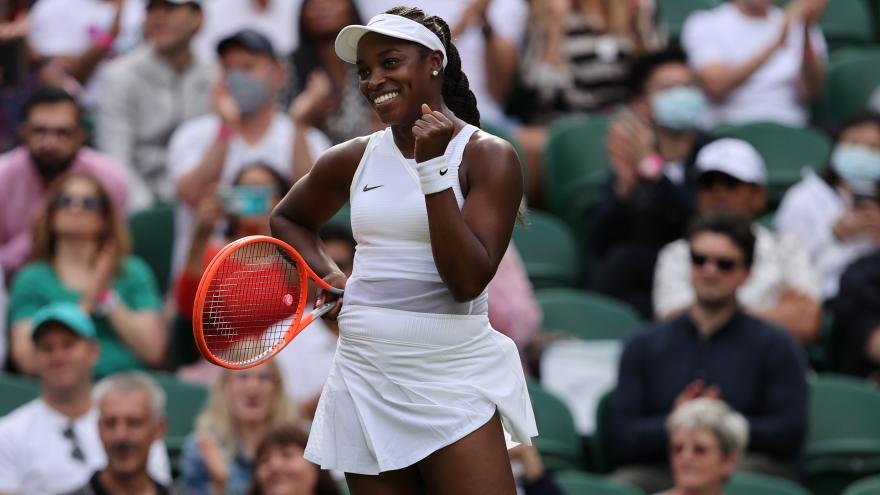 (CNN) -- It was a good day to be an American at Wimbledon on Monday, with both Sloane Stephens and Frances Tiafoe causing upsets as the grass-court grand slam began.

Around 6,000 people were in Court One to watch the unseeded Tiafoe dominate Tsitsipas, who has now bowed out of the opening round of Wimbledon in three of his last four attempts.

Meanwhile, Tiafoe has only gotten as far as the third round at SW19 before but did reach the quarterfinals of the Australian Open in 2019.

"Definitely one of my best [matches]. From start to finish, it was pretty clean," Tiafoe, 23, said after the win.

"This is what you train for, this is what it's all about. I live for these kind of moments."

READ: Barty discusses Wimbledon, her Olympic 'dream' and being her 'authentic self'

Meanwhile, Stephens gave an impressive performance to knock out Kvitova.

The 28-year-old, who won the US Open in 2017, has never progressed past the quarterfinals at the All England Club but showed plenty of promise against the Czech 10th seed, in what was her first match playing on grass since 2019.

"It's so special, obviously not playing on grass for two years and then being able to come back, and my first match on grass is on Centre Court here with fans back is really just a dream," Stephens said after the match.

Wimbledon is eagerly anticipated by tennis fans all around the world, and even more so this year after the tournament was canceled in 2020 because of the pandemic.

At the moment, there are 50% stadium capacities for Centre Court and No. 1 Court, and 75% for the smaller show courts.

The tournament's latter stages will be played in front of 100% capacity crowds as part of the UK government's pilot scheme.

READ: Serena Williams confirms she will not play at 2020 Tokyo Olympics

Halep out of Tokyo Olympics

It's the last major tennis competition before the Olympics but many of the sport's top stars have pulled out of playing in Tokyo already.

World No.3 Simona Halep is the latest to rule herself out after saying she needed more time to recover from a calf injury.

She joins a growing list of absentees which includes the likes of Rafa Nadal, Dominic Thiem and Serena Williams.

"Nothing brings me more pride than representing Romania, but sadly the recovery from my calf injury requires more time and I have made the decision to withdraw from the Olympic Games this summer," Halep wrote on Twitter.

"After the disappointment of missing the French Open and Wimbledon, having to skip the Olympics is incredibly tough to digest, but I am determined to come back stronger."