US spent $200 million sending 8,722 ventilators around the world and can't find many now, watchdog finds 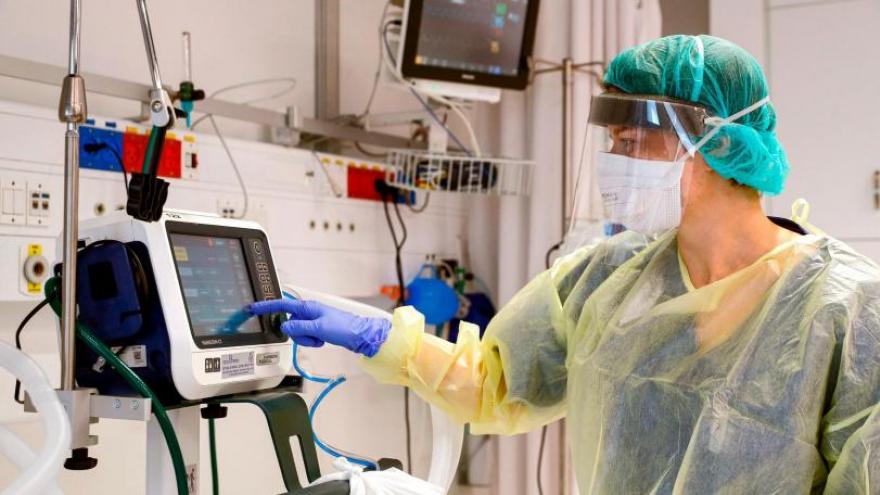 The Trump administration spent $200 million sending thousands of ventilators around the world. This picture taken on March 16, 2020 at Samson Assuta Ashdod University Hospital in the southern Israeli city of Ashdod shows Dr Karina Glick checking a medical ventilator control panel at a ward.

(CNN) -- The Trump administration spent $200 million sending thousands of ventilators around the world, starting weeks after President Donald Trump touted America as the "king of ventilators," but without any established way to locate them, the Government Accountability Office found in a report released Thursday.

One hundred fifty of the ventilators went to countries with zero new cases per day on the date the government committed to sending the life-saving machines overseas, as the US edged closer to a shortage of much-needed ventilators. Kiribati and Nauru, two of the countries that received a total of 20 ventilators, have never had a confirmed case of coronavirus, according to the World Health Organization.

From late May to late September, the previous administration committed to sending 8,722 ventilators to 43 countries, but with no clear criteria for determining which countries need ventilators or how many to send, the GAO found.

In April, Trump claimed the US was the "king of ventilators," despite falsely asserting that the Obama administration had left him with none. In fact, the Department of Health and Human Services told CNN that the US had 16,660 ventilators on hand -- almost all that had been in the nation's stockpile since the end of the previous administration -- with another 2,425 in maintenance. But there was still a severe shortage across the globe, and the US was reaching the peak of its first wave of infections, with approximately 2,000 deaths per day in mid-April.

As the pandemic began to surge in late March, Trump invoked the Defense Production Act to ramp up production of ventilators and N95 masks, two key components in the battle against the coronavirus.

In May, the US Agency for International Development began delivering the first ventilators abroad, the GAO reported, with the initial shipments going to South Africa, El Salvador and Russia.

The National Security Council instructed USAID on decisions regarding "ventilator donations, including the recipient countries, quantities, and manufacturers." But neither USAID nor the NSC gave any information about how disbursement decisions were made.

The NSC did not respond to GAO questions, the report said.

The distribution of ventilators was not part of USAID's initial plan for Covid response, further complicating the effort.

Nearly all of the 8,722 ventilators had been distributed by December, but USAID had no reliable way to track the machines and had only "limited information" about their locations, the report said. Only in December did USAID tell the GAO that it had "begun implementing" a process to locate the ventilators, which involves gathering information from manufacturers, service providers, ministries of health overseas and partners.

The lack of knowledge regarding the whereabouts of the ventilators happened despite the agency having funds to track the machines for long-term oversight.

Five countries accounted for nearly half of the ventilators: Brazil, Indonesia and South Africa each received 1,000 machines, while El Salvador got 600 and Peru received 500. But the needs in these countries varied widely. El Salvador had 74 new cases and one death on the day USAID committed to the allotment of ventilators, while Brazil had 33,322 new cases and 1,046 deaths.