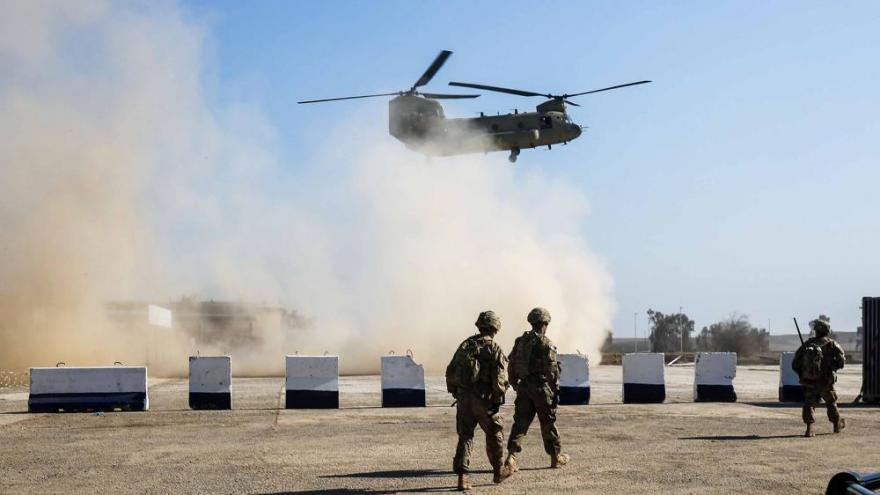 The Pentagon signals it is open to sending more troops to Iraq. US Army C-47 Chinook helicopter flies over the village of Oreij, south of Mosul, on February 22, 2017, where a temporary military base has been established.

(CNN) -- The Pentagon opened the door to the possibility of sending more American troops to the Middle East as part of a newly expanded NATO training mission to support Iraqi forces and ensure that ISIS does not rise again.

"The US is participating in the force generation process for NATO Mission Iraq and will contribute its fair share to this important expanded mission," Pentagon spokesperson Cmdr. Jessica L. McNulty told CNN. Secretary of Defense Lloyd Austin spoke about the mission with his NATO counterparts during a meeting with defense ministers on Thursday.

Late Thursday night, Pentagon spokesperson John Kirby clarified that there are "no plans" to send more US troops into Iraq itself. However, US troops could also support the mission from outside the country, a defense official told CNN.

"We support NATO's expanded mission in Iraq and will continue to do so, but there are no plans to increase U.S. force levels there," Kirby said on Twitter.

Such a move would have been a reversal of the previous administration's policy which reduced the number of troops in the country to 2,500 following former President Donald Trump's election defeat. The Biden administration is also weighing whether to stick to a May deadline to withdraw all American troops from Afghanistan.

At a press conference Thursday, NATO Secretary-General Jens Stoltenberg said the NATO mission would increase in size from 500 personnel to about 4,000.

Austin "welcomed the expanded role" of the NATO mission in Iraq, according to a readout of the discussions provided by the Pentagon. He "expressed confidence that all of the work done to date with the Iraqi government and security forces will lead to a self-sustainable mission."

Stoltenberg stressed the importance of the NATO mission to prevent the resurgence of ISIS.

"Not so long ago, ISIS controlled territory as big as the United Kingdom and roughly 8 million people. They have lost that control," Stoltenberg said. "But, ISIS is still there. ISIS still operates in Iraq, and we need to make sure that they're not able to return. And we also see some increase in attacks by ISIS. And that just highlights the importance of strengthening the Iraqi forces."

The increase in NATO forces would be incremental and comes at the request of the Iraqi government, he added.

Trump's acting Secretary of Defense Christopher Miller touted the withdrawal of troops prior to Biden taking office as a sign of the mission's success, saying, "The drawdown of US force levels in Iraq is reflective of the increased capabilities of the Iraqi security forces. Our ability to reduce force levels is evidence of real progress."

In early February, Austin announced a global force posture review, in which military leaders would examine US troop levels around the world, including the "military footprint, resources, strategy and missions."

Austin stressed the importance of alliances and partnerships as part of the review.

"From Afghanistan and the Middle East, across Europe, Africa and our own hemisphere, to the wide expanse of the Western Pacific, the United States stands shoulder-to-shoulder with allies old and new, partners big and small," Austin said. "Each of them brings to the mission unique skills, knowledge and capabilities. And each of them represents a relationship worth tending, preserving and respecting. We will do so."

Pentagon spokesman John Kirby said that no final decisions or recommendations have been made as part of the global force posture review.

This story has been updated with additional comment from Pentagon spokesman John Kirby.