US sets up fund to distribute frozen billions to Afghanistan 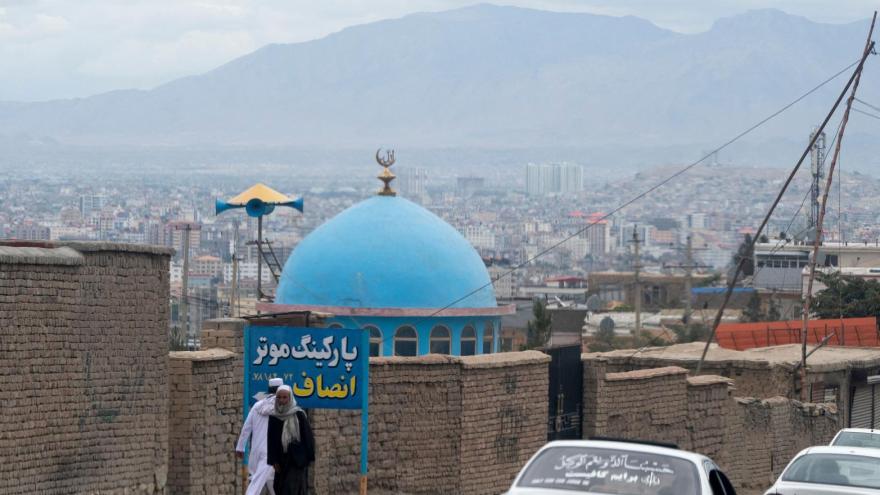 The Biden administration has set up a new fund that could eventually put billions of dollars in frozen Afghan money to use to promote economic stability. Afghan men are pictured here walking past the blue dome of a mosque a day after a blast in Kabul.

(CNN) -- The Biden administration has worked with Switzerland and Afghan economists to set up a new fund to put billions of dollars in frozen Afghan money to use to promote economic stability in the country, according to two senior US officials.

The US is moving $3.5 billion to the new "Afghan Fund," but officials said they won't release the money imminently to an institution in Afghanistan because there is no trusted institution to guarantee the funds will benefit the Afghan people, the officials said.

Instead, it will be administered by an outside body, independent of the Taliban and the country's central bank.

"The Fund may use assets to provide Afghan banking sector liquidity, keep Afghanistan current on its debt service obligations, support exchange rate stability, transfer funds, as appropriate to public Afghan financial institutions, or any other use for the benefit of the Afghan people that is approved by the Fund's Board of Trustees," said a State Department official.

Down the line, transferring these funds to the Afghan central bank could happen but it would depend on two key factors: responsible management of the bank and assurances that the funds will not be diverted to terrorists or criminals, the officials added.

"We do not have that confidence today," said a senior US official. At minimum the Afghan central bank will need to "demonstrate its independence from political influence and interference." It will also need to demonstrate it has "instituted adequate anti-money laundering and countering the financing of terrorism controls" and "complete a third party needs assessment and onboard a reputable third party monitoring," the official explained.

The US has been clear in telling the central bank -- known as the Da Afghanistan Bank (DAB) -- what steps it would need to take and reiterated those steps in a letter this week from the United States deputy secretary of the Treasury, which CNN reviewed. The letter cites the need for the DAB to demonstrate independence from Taliban influence and interference, among other expectations.

Earlier this year President Joe Biden signed an executive order allowing for the $7 billion in frozen assets from Afghanistan's central bank to eventually be distributed inside the country and to potentially fund litigation brought by families of victims of the September 11, 2001, terror attacks. The funds were frozen by the US government after the Afghan government collapsed last year and the Taliban took over control of the country.

Afghanistan -- now under Taliban control for over a year -- is facing a potential economic catastrophe. Lawmakers have pushed the Biden administration to release the funds in order to keep the country running, for necessities such as paying teacher salaries. Last month, the UN said that the humanitarian support being provided to the country is not enough to sustain its economy.

The timing of when the central bank could meet the expectations laid out is hard to estimate, US officials said this week. In recent months US officials have said that recapitalization of the Afghan central bank is not a "near-term option."

Setting up the new fund will enable the funds to flow quickly, without having to go through the central bank to distribute funds.

"The people of Afghanistan face humanitarian and economic crises born of decades of conflict, severe drought, COVID-19, and endemic corruption," said Wendy Sherman, US deputy secretary of state. "Today, the United States and its partners take an important, concrete step forward in ensuring that additional resources can be brought to bear to reduce suffering and improve economic stability for the people of Afghanistan while continuing to hold the Taliban accountable."

The fund's board will consist of a US and Swiss government official, as well as two Afghan economic experts. The Taliban is not part of this financing mechanism, the officials emphasized.

Still, the US remains in contact with the Taliban for "pragmatic engagement" in support of the Afghan people and to advance America's interests, one of the senior US officials said.

By setting up this mechanism the US is making it clear that they intend to get the frozen funds to the Afghan people, though they do not intend to recognize the Taliban which is currently leading the country.

"I think relief organizations as well as countries that care about Afghans have sought to continue to work with almost 500,000 civil servants that continue to work on behalf of the people that includes teachers and includes health workers includes engineers, and it'll include depth technocrats as well," said the senior US official.

CORRECTION: This story has been updated to reflect the new fund will distribute frozen money independent of the Taliban and Afghanistan's central bank.