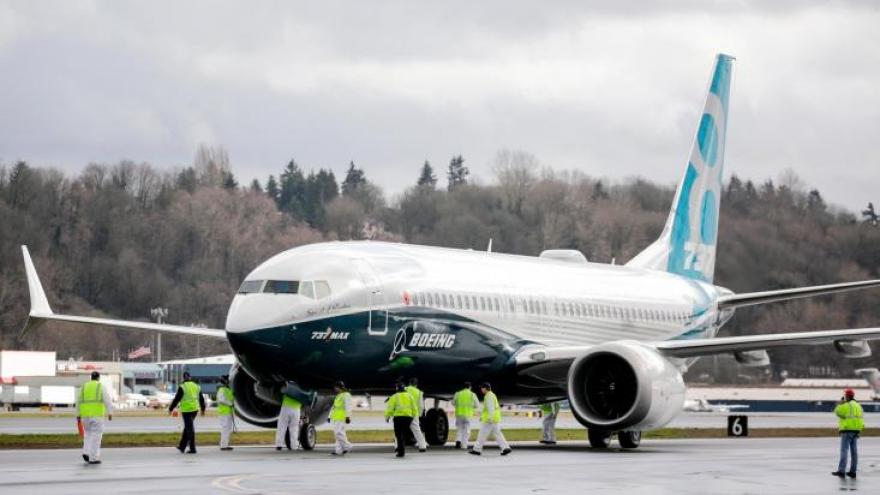 Democratic Sen. Richard Blumenthal of Connecticut said Tuesday he's told his family and others to switch planes rather than fly on the Boeing 737 MAX 8 aircraft, following the deadly crash in Ethiopia over the weekend.

(CNN) -- The Senate committee that oversees the US aviation industry will hold a hearing on air safety, following the weekend's deadly crash in Ethiopia, the chairman of the Senate Committee on Commerce, Science and Transportation announced Tuesday.

"It is important to allow the FAA, NTSB and other agencies to conduct thorough investigations to ensure they have as much information as possible to make informed decisions," said Republican Sen. Roger Wicker of Mississippi in his statement. "Thousands of passengers every day depend on the aviation system to get them safely to their destinations, and we must never become complacent with the level of safety in our system. Therefore, the committee plans to hold a hearing reviewing the state of aviation safety to ensure that safety is maintained for all travelers."

The announcement of the hearing follows days of lawmakers asking questions about and some demanding the grounding of the Boeing 737 MAX 8 aircraft, which was not only the model of plane that crashed over the weekend but also was the same type of vessel that went down over the Java Sea last October in a separate deadly cash.

Democratic Sen. Richard Blumenthal of Connecticut, who sits on the committee, said Tuesday he's told his family and others to switch planes rather than fly on the Boeing 737 MAX 8.

"There should be a full investigation but in the meantime, better safe than sorry," said Blumenthal, a member of the Senate Committee on Commerce, Science and Transportation. Speaking to reporters on Capitol Hill, he added the planes are "unsafe at any speed right now."

Rhode Island Democratic Sen. Sheldon Whitehouse called for a "very serious and rapid investigation" into the planes on CNN's "Erin Burnett OutFront" on Tuesday. He said he was concerned the Trump administration would not take that step despite "the rest of the world ... saying we need to get to the bottom of it before we let these planes fly."

"Unfortunately, what we see so often in the Trump administration, regulatory agencies that take their signals from big industry," Whitehouse said. "And we want to make absolutely sure the FAA is not trying to keep these planes flying, even though they're not safe, just because Boeing and airlines want it that way."

The exact cause of Sunday's crash is unknown and there is no evidence of a link at this point between the two air disasters, but similarities in the incidents have prompted caution among some airlines. While some countries — including the UK, China and Australia — and airlines have grounded the Boeing 737 MAX 8 aircraft, the US Federal Aviation Administration declined to do so Monday.

Some lawmakers -- including Wicker who announced the hearing Monday -- said they were fine with flying on a 737 Max. Sen. Lindsey Graham, a South Carolina Republican who has major Boeing plant in his state, says he "trusts the FAA" to make any decision on grounding the planes.

"I'll let the FAA make that decision," Graham told reporters. "I trust their judgment until somebody proves that I shouldn't." When asked about the Boeing plant in his state, he responded, "Yeah, but I want to do what's best for the traveling public."

In a statement, the FAA said investigators have not yet determined whether the issue with the Ethiopian Airlines incident is related to the one that brought down the same plane operated by Lion Air last year.

"External reports are drawing similarities between this accident and the Lion Air Flight 610 accident on October 29, 2018," reads the FAA's Continued Airworthiness Notification to the International Community. "However, this investigation has just begun and to date we have not been provided data to draw any conclusions or take any actions."

Blumenthal said if the FAA isn't going to require the planes be grounded, then the airlines should do it. At least two US airlines fly the 737 MAX 8, as well as other international based airlines that fly into the US. Both US-based airlines who have the planes are continuing to use them as of Tuesday.

"These two catastrophic accidents -- both claiming the lives of all on board -- call into serious question the safety of these airplanes," Blumenthal said in a statement Monday. "The FAA and the airline industry must act quickly and decisively to protect American travelers, pilots, and flight attendants. These planes must be grounded immediately, and airlines should work expeditiously to minimize disruption and accommodate customers whose travel is impacted."

Republican Sen. Mitt Romney of Utah also called for the grounding of the aircraft, as has Democratic Sen. Dianne Feinstein of California.

Republican Sen. John Thune of South Dakota told reporters that he would "prefer flying on some other plane" if it were up to him.

Thune, who is the second-ranking Senate GOP leader, seemed to suggest he would be open to grounding the planes if the evidence pointed to it, but stopped short of saying the planes should be grounded at this point. He cited the National Transportation Safety Board's participation in the crash's investigation. Thune sits on the Subcommittee on Aviation and Space of the Committee on Commerce, Science and Transportation.

NTSB officials visited the crash site Tuesday and the agency said it is not giving updates on the investigation.

"The Ethiopian Aircraft Accident Investigations Bureau is leading the investigation and, according to ICAO Annex 13, is the organization that speaks for the probe," the agency said in a statement. "While we are assisting the Ethiopians, we will not be the ones releasing any results."

Boeing said in a statement that they continued to have full confidence in the safety of the 737 Max 8 aircraft and cited the FAA's decision to not ground the plane in its statement.

"We understand that regulatory agencies and customers have made decisions that they believe are most appropriate for their home markets," the company said in its statement. "We'll continue to engage with all of them to ensure they have the information they need to have confidence in operating their fleets or returning them to service."

CORRECTION: This story has been updated to correctly reflect John Thune's home state.