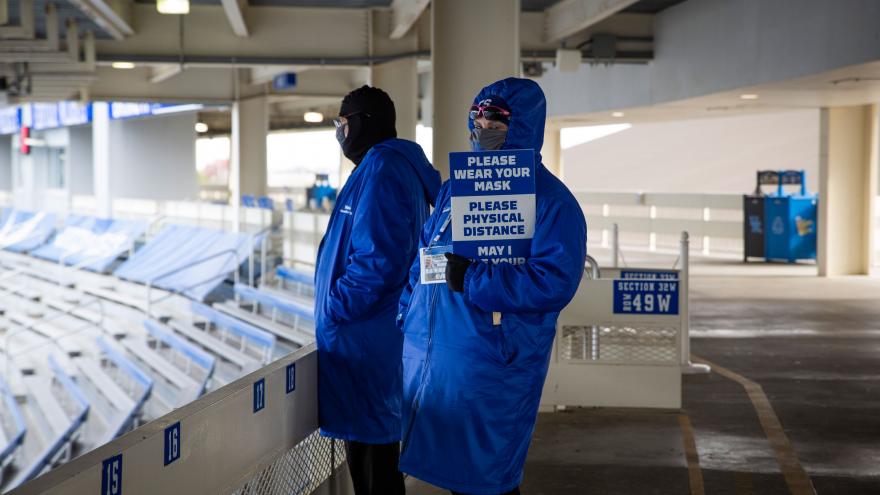 (CNN) -- The United States saw the highest Covid-19 daily death toll in more than six months Tuesday, with at least 1,707 fatalities, according to data from Johns Hopkins University.

The coronavirus is now killing at least one American every minute of the day, bringing the country to another horrific milestone on Wednesday: At least 250,029 people in the country have died of Covid-19 since the first death on February 29 in Washington state.

And it's only going to get worse, said Dr. Jonathan Reiner, a professor at George Washington University School of Medicine.

"The horrible death count that we saw yesterday in the United States ... reflects the number of people who were being infected three weeks ago -- two to three weeks ago, because that's the lag," Reiner said Wednesday.

And while some hospitals are running out of health care workers, the US once again set a new record for hospitalized Covid-19 patients -- 76,830 on Tuesday, according to the Covid Tracking Project.

Virtually every state heading in the wrong direction

As of Wednesday, 47 states had at least 10% more new daily cases than this time last week, according to Johns Hopkins data.

Two states are relatively steady compared to last week -- North Dakota and Iowa -- but that's not saying much, since both states have recently had abysmal rates of new cases, hospitalizations and deaths.

Only Hawaii has seen at least a 10% decrease in new cases.

This surge in nationwide infections isn't just due to more testing.

While new cases have increased 29% over the past week, according to Johns Hopkins, testing nationwide has increased only about 11%, according to the Covid Tracking Project.

Arkansas Gov. Asa Hutchinson said that at his state's current rate, "1,000 Arkansans could die of Covid-19 between now and Christmas."

Texas officials have deployed two mobile refrigerator trucks to Amarillo to handle the rise in fatalities.

In Illinois, Covid-19 is now the third leading cause of death in the state, behind heart disease and cancer, Gov. J.B. Pritzker said Wednesday.

"ICU and non-ICU hospital occupancy by Covid-19 patients could reach as much as five times our previous records from the spring," Pritzker said earlier.

"We will continue to see a rise in both hospitalizations and deaths from Covid-19 for weeks ahead because of the infections that have already happened," he said.

"But we can change our longer-term outcome. We can save potentially thousands of lives in the next few months if we make changes right now to stop this in its track."

A stay-at-home advisory started this week in Chicago, where city officials also urged residents not to have guests in their homes, to cancel traditional Thanksgiving celebrations and avoid traveling.

Similar measures have been announced across the US in recent days.

In Maryland, the governor issued an emergency order effective Friday requiring bars and restaurants to close between 10 p.m. and 6 a.m., except for carryout and delivery services.

"We are in a war right now," Gov. Larry Hogan said. "And the virus is winning. Now, more than ever, I'm pleading with the people of our state to stand together, a while longer."

New York City schools will close again Thursday, and all students will be learning remotely, after the city's test infection rate reached 3%, the threshold that Mayor Bill de Blasio had said would trigger such a decision.

"The last thing we wanted to see is the schools close," de Blasio said Wednesday. "But there's been resolve about the fact that the game plan, so often, has worked of sticking to those tough standards."

"And that's why I'm resolved about the fact that to bring schools back, we can do it -- we've done it before, we'll do it again -- but we have to come up with even tougher standards."

Other school districts around the country have made the same decision recently, and Wednesday, the governor of Kentucky announced that all K-12 students in the state will be returning to remote learning starting Monday.

The state's highest daily cases have been reported over the past week, Beshear said, and the test positivity rate is more than 9%.

Beshear announced a number of other measures to contain the spread of the virus, including limiting the size of private gatherings and events and closing indoor service at bars and restaurants.

"We need every Kentuckian to do their part," he said. "We cannot continue to let this third wave devastate our families."

As cases surge across the US, colleges and universities are also navigating what their next steps should look like, especially following a holiday season that experts fear will further fuel the rampant spread of the virus.

In Boston, Mayor Marty Walsh said the holidays are "especially high risk for college students who don't live at home."

"Normally, many students travel to their hometown for Thanksgiving, then return to campus for the rest of the semester," Walsh said.

"We have asked college students not to do that this year. If you go home for Thanksgiving, you should not be returning to Boston this semester. You should do the rest of your learning ... remotely."

Earlier this week, Connecticut Gov. Ned Lamont also issued guidance for out-of-state college students who were planning to return home to Connecticut for the holiday.

He said returning students should self-quarantine for 14 days before or after coming home, get tested for Covid-19 both before leaving school and after getting home, not attend parties and not quarantine with any elderly or at-risk family members.

Vaccines are still months away for most people

While there's great news on the vaccine front, most Americans probably won't be able to get vaccinated until the middle of next year.

The Pfizer/BioNTech vaccine is 95% effective and has shown no serious safety concerns, Pfizer said Wednesday. BioNTech said it plans to request emergency use authorization from the US Food and Drug Administration on Friday.

Another vaccine, from Moderna, is 94.5% effective against coronavirus, according to early data released this week. The company says its vaccine did not have any serious side effects.

Once a vaccine is given the green light for emergency use, distribution is expected to begin within 24 hours, US Army Gen. Gustave Perna, the chief operating officer for Operation Warp Speed, said in a briefing Wednesday.

By the end of the year, the United States should have about 40 million doses of vaccine, Health and Human Services Secretary Alex Azar said Wednesday.

"And production of course would continue to ramp up after that," Azar said.

Frontline workers and the vulnerable are expected to be the first to get the vaccine, health experts have said.

But health experts also say Americans must double down on safety measures, as there will be many more illnesses and deaths before a vaccine is available to most people.

Dr. Francis Collins, director of the National Institutes of Health, said there are still several steps needed before vaccines get into the public's arms.

"They're going to look very carefully to be sure that everything is in order with safety and with efficacy, then they will make a judgment about whether both of these vaccines, Pfizer and Moderna, may be in fact entitled to emergency use authorization," Collins said.

The two companies could receive EUAs by early to mid-December, he added.

"If these two vaccines do get approval, emergency use authorization, there will be about 40 million doses ready to be delivered in December," he said.

People will need two doses of either vaccine. "So that's 20 million people that can be immunized and we will need to make sure that is utilized for the highest risk people," he said.

More doses will become available every month after that, Collins said, and there are other vaccine candidates that may also win approval.

"The hope would be that by April we really start to see a lot of people getting immunized," Collins said.

"And certainly by the summer we would hope to have most of America actually immune to this and we could start to think about getting back to life as normal."