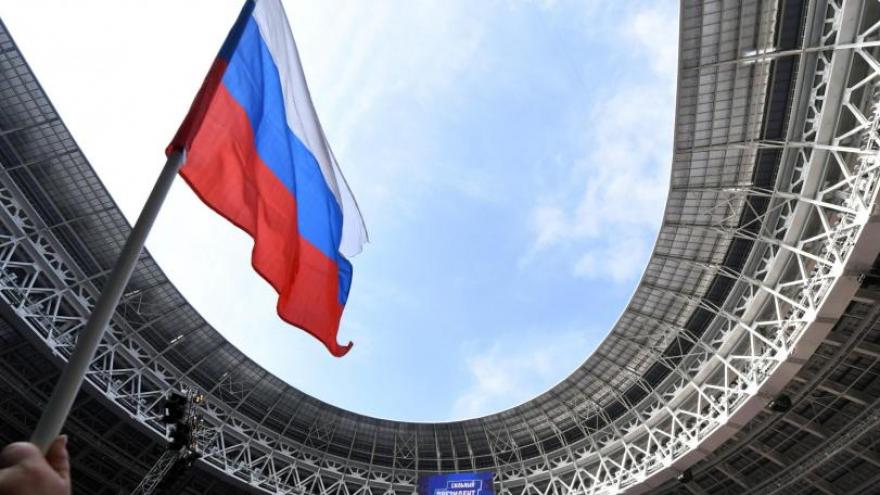 The US is concerned that Russia carried out a major anti-satellite weapons test over the weekend, two US officials told CNN. One of the officials said it may have created a potentially dangerous debris field in space.

(CNN) -- The US strongly condemned a Russian anti-satellite test on Monday that forced crew members on the International Space Station to scramble into their spacecraft for safety, calling it "a reckless and dangerous act" and saying that it "won't tolerate" behavior that puts international interests at risk.

US Space Command said Russia tested a direct-ascent anti-satellite, or DA-ASAT missile, striking a Russian satellite and creating a debris field in low-Earth orbit of more than 1,500 pieces of trackable orbital debris that is also likely to generate hundreds of thousands of pieces of smaller orbital debris.

US officials emphasized the long-term dangers and potential global economic fallout from the Russian test, which has created hazards for satellites that provide people around the world with phone and broadband service, weather forecasting, GPS systems which underpin aspects of the financial system, including bank machines, as well in-flight entertainment and satellite radio and television.

"Russia has demonstrated a deliberate disregard for the security, safety, stability, and long-term sustainability of the space domain for all nations," said US Space Command commander Gen. James Dickinson. "The debris created by Russia's DA-ASAT will continue to pose a threat to activities in outer space for years to come, putting satellites and space missions at risk, as well as forcing more collision avoidance maneuvers. Space activities underpin our way of life and this kind of behavior is simply irresponsible."

NASA Administrator Bill Nelson said in a statement that he was "outraged by this irresponsible and destabilizing action. With its long and storied history in human spaceflight, it is unthinkable that Russia would endanger not only the American and international partner astronauts on the ISS, but also their own cosmonauts. Their actions are reckless and dangerous, threatening as well the Chinese space station."

The crew on board the ISS had to quickly don their spacesuits and jump into their spacecrafts in case the station was hit by some passing debris, according to Russia's space agency ROSCOSMOS. Two US officials told CNN the precautionary measures were a direct result of the debris cloud caused by the Russian test.

NASA said the "crew was awakened and directed to close the hatches to radial modules on the station," while hatches between the US and Russian segments remained open.

"An additional precautionary measure of sheltering the crew was executed for two passes through or near the vicinity of the debris cloud," NASA's statement said. "The crew members made their way into their spacecraft shortly before 2 a.m. EST and remained there until about 4 a.m. The space station is passing through or near the cloud every 90 minutes, but the need to shelter for only the second and third passes of the event was based on a risk assessment made by the debris office and ballistics specialists at NASA's Johnson Space Center in Houston."

On Monday morning, Shkaplerov tweeted, "Friends, everything is regular with us! We continue to work according to the program."

Secretary of State Antony Blinken echoed the condemnations from Nelson and Dickinson in a statement Monday. "The long-lived debris created by this dangerous and irresponsible test will now threaten satellites and other space objects that are vital to all nations' security, economic, and scientific interests for decades to come," Blinken said.

State Department spokesperson Ned Price said the test "will significantly increase the risk to astronauts and cosmonauts on the International Space Station, as well as to other human spaceflight activities," adding that "Russia's claims of opposing the weapons and weaponization of space are disingenuous and hypocritical."

Only a handful of successful anti-satellite weapon tests have been carried out by the US, Russia, China and India.

Price said the US would consult with allies and partners on a response.

"I don't want to get to get ahead of specific measures that we may pursue, that our partners and allies may pursue, but we are going to continue to make very clear that we won't tolerate this kind of activity," Price said at Monday's State Department briefing, adding that the US wanted "to make very clear why this is so dangerous, why this is so, such irresponsible conduct on the part of a nation state."

Price said the US had spoken to senior Russian officials several times to warn them about the danger of such a test but would not say whether there had been a formal diplomatic communication to Moscow.

When asked about reports that the ISS crew had to seek shelter, Price referred reporters to Russia and stressed that both American astronauts and Russian cosmonauts were affected.

The space station continues to be at risk of impact from objects too small to be tracked as it orbits 220 nautical miles above the Earth. These tiny objects could be pieces of rock, micrometeorites, dust particles or even flecks of paint that chip off of satellites.

Space Command said it is examining the new wave of debris. "We are actively working to characterize the debris field and will continue to ensure all space-faring nations have the information necessary to maneuver satellites if impacted," a Space Command spokesperson said. "We are also in the process of working with the interagency, including the State Department and NASA, concerning these reports and will provide an update in the near future."

Pentagon spokesman John Kirby told reporters at a Monday press briefing that the "most immediate concern is the debris itself, which is now floating out there, and could become a hazard, including to the International Space Station."

Kirby said the Pentagon is watching "closely the kinds of capabilities that Russia seems to want to develop."

The incident comes at a time of increased tensions between the US and Russia. US officials have publicly sounded the alarm about Russia's buildup of troops near its border with Ukraine and joined European nations in expressing concern about the migrant crisis on the border with Belarus, which European officials have described as a man-made crisis that Belarus has created with Russian backing as an act of "hybrid war" against Europe.