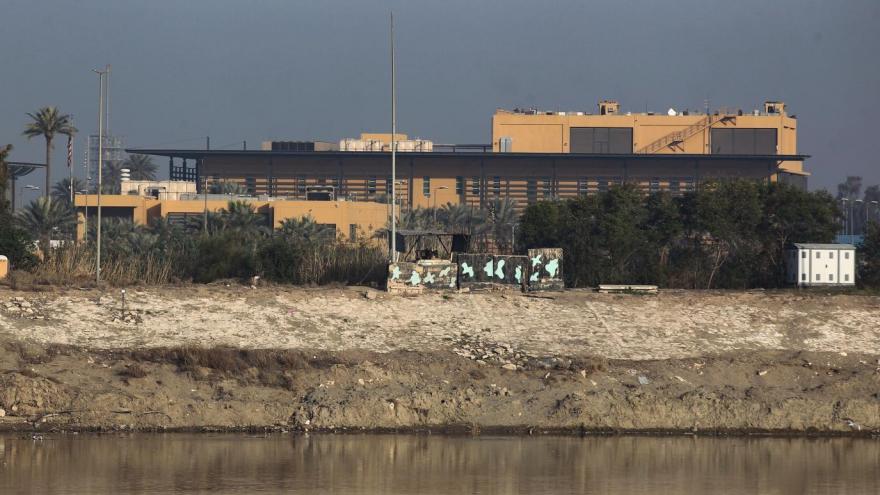 A general view shows the US embassy across the Tigris river in Iraq's capital Baghdad on January 3, 2020.

(CNN) -- US Central Command said Wednesday that the Sunday rocket attack on Baghdad's International Zone near the US embassy was "almost certainly conducted by an Iranian-backed rogue militia group."

Captain William Urban, the CENTCOM spokesman, said the 21 rocket attack was the largest rocket attack since 2010 on the area in central Baghdad, also known as the Green Zone.

"While this 21 rocket attack caused no US injuries or casualties, the attack did damage buildings in the US Embassy compound, and was clearly NOT intended to avoid casualties," Urban said in a statement.

CENTCOM oversees US troops in the Middle East and Central Asia.

"These groups are Iranian-backed because Iran provides both material support and direction. They are rogue because they are actually acting on behalf of Iranian interests and direction in a direct betrayal of Iraqi sovereignty," Urban said.

The rockets fired into Baghdad's International Zone on Sunday damaged buildings and cars in a residential area near the US Embassy, which said the attack "resulted in engagement of Embassy defensive systems" and that the compound suffered slight damage, but no embassy personnel were injured.

The Iraqi military said one Iraqi soldier was injured when a rocket landed near a security checkpoint.

Secretary of State Mike Pompeo said Sunday the US "strongly condemns" the attack and also blamed militias affiliated with Iran.

CNN has previously reported that the US military has been tracking intelligence for the last few weeks about the increased threats from Iranian-backed militias inside Iraq.

Some US officials have expressed concern that Iran may mark the January 3 anniversary of the US killing of General Qasem Soleimani by carrying out a retaliatory strike.

On Monday, the US Navy took the unusual step of publicly announcing the nuclear-powered guided-missile submarine USS Georgia transited the Strait of Hormuz, accompanied by two additional American warships.

The US Navy rarely discusses the movement of its submarines, but Monday's announcement also included details on the vessel's capabilities, including its "ability to carry up to 154 Tomahawk land-attack cruise missiles."

The CENTCOM statement followed a White House meeting earlier Wednesday where officials discussed recent Iranian threats, particularly toward the US embassy in Baghdad, and options were discussed, an administration official told CNN.

The standard option of striking back at launch sites remains on the table, officials said, but no kinetic options were approved. Instead, talks focused on increased efforts on the diplomatic front and public messaging, the administration source said.

Later Wednesday, President Donald Trump used Twitter to deliver some of that public messaging in the form of a threat to Tehran, writing that he was offering "some friendly health advice to Iran: If one American is killed, I will hold Iran responsible. Think it over."

Unlike the statements from CENTCOM and Pompeo, which attributed the attack to Iran-backed militias, Trump accused Tehran directly.

"Our embassy in Baghdad got hit Sunday by several rockets," Trump wrote from aboard Air Force One. "Three rockets failed to launch. Guess where they were from: IRAN."

The President added that the US was hearing "chatter" of additional attacks against Americans in Iraq.

On Monday, a spokesman for Iran's foreign ministry denied Iran was behind the Sunday rocket barrage, saying that the Iranian embassy is in the same area and noting that "attacking any diplomatic missions and residential areas is wrong and banned by international law."