US saw a two-decade high in border crossings in July 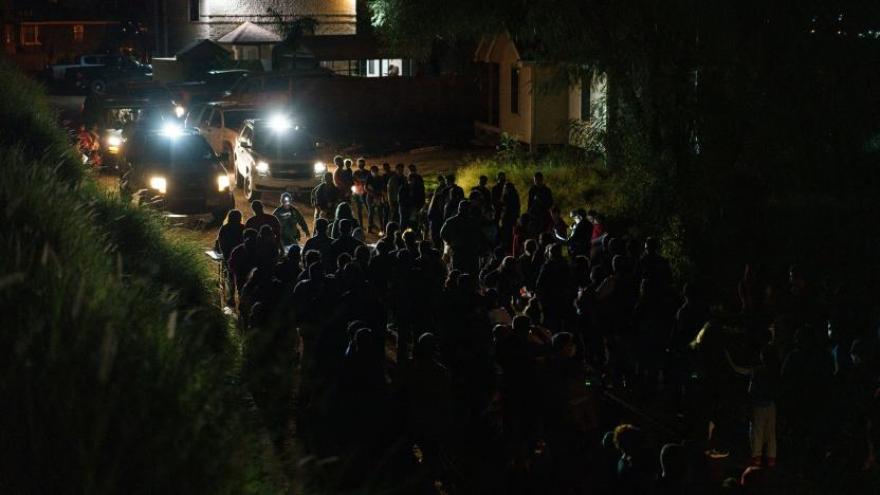 Homeland Security Secretary Alejandro Mayorkas, says that the Biden administration is facing a “serious challenge” at the US southern border, pictured here in Roma, Texas, on July 9, and the US has encountered an “unprecedented” number of migrants illegally crossing the border.

(CNN) -- The Biden administration is facing a "serious challenge" at the US southern border, Homeland Security Secretary Alejandro Mayorkas said Thursday, saying the US has encountered an "unprecedented" number of migrants illegally crossing the border.

During a news conference in Brownsville, Texas, Mayorkas stressed the sharp increase of migrants arriving at the US-Mexico border, many of whom are fleeing deteriorating conditions in their home countries.

In July, US Customs and Border Protection apprehended 212,672 people, up from June and amid some of the hottest summer weeks -- when arrests usually dip -- and of those, 95,788 individuals were expelled. Twenty-seven percent had previously tried to cross the border, Mayorkas said, acknowledging that a Trump-era policy that allows border authorities to turn migrants away has contributed to people trying to cross the border multiple times.

July marks the highest monthly number of migrants detained at the US-Mexico border in two decades.

Customs and Border Protection also arrested 18,962 unaccompanied children in July, surpassing the number of apprehensions of minors in March, when overcrowded border facilities raised alarm among officials. While the administration has made inroads in moving children out of Customs and Border Protection custody, thousands remain in temporary facilities waiting to be reunited with sponsors, like a parent or relative, in the US.

Since October, the US has encountered 845,307 unique individuals, compared with 796,400 during the same period in 2019, when there was a border crisis under the Trump administration.

The rate of positivity for Covid-19 among migrants is at or lower than the rates in local border communities, he said.

The administration has taken a series of actions to crack down on the flow of migrants to the US southern border. In recent weeks, the Department of Homeland Security has surged resources and personnel to the Rio Grande Valley, which has been overwhelmed by the number of arrivals, deploying Immigration and Customs Enforcement officers to assist Border Patrol, bolstering medical staff, resuming a fast-track deportation procedure for migrant families and setting up flights to send people to other border sectors for processing.

Earlier this week, Mayorkas traveled to Mexico with a US delegation to meet with officials. He cited the trip during his remarks Thursday, underscoring US coordination with Mexico on migration, including, for example, working with the country to increase interdictions.

This month, the Biden administration started flying migrants apprehended at the southern border to the interior of Mexico to try to keep them from attempting to cross the border again. The practice has fielded criticism from immigrant advocates.

"The Biden administration must stop using Trump's cruel and illegal playbook," said Eleanor Acer, senior director of refugee protection at Human Rights First, in a statement. "These expulsions are simply ludicrous from a public health perspective, and only confirm that the continued use of Title 42 has nothing to do with public health."

Last week, the American Civil Liberties Union, having hit an impasse in negotiations with the government, said it was heading back to court to challenge the administration's continued use of a public health authority allowing the swift expulsion of migrants.

The Biden administration has been caught between expressing compassion toward migrants and relying heavily on deterring those journeying to the US southern border. As a result, the border situation remains a political liability for the White House that is drawing criticism from both the left and the right.

In an interview with CNN on Friday, Mayorkas listed a number of factors contributing to people fleeing their countries of origin, including decimated economies, extreme weather events and violence, as the US faces an overwhelming number of migrants at the US-Mexico border.

"I think, really, we have to confront the fact that people's desperation is so severe," he told CNN's Pamela Brown.

The administration has also come under heavy scrutiny over poor conditions at some temporary facilities for unaccompanied migrant children that are overseen by the Department of Health and Human Services. The HHS inspector general recently launched a review of one of those facilities at Fort Bliss near El Paso, Texas.

"The Department of Health and Human Services took swift action at Fort Bliss to address the conditions that the inspector general of that department reported," Mayorkas said Friday.