US runner Molly Seidel finishes her first-ever marathon, qualifies for the Tokyo Olympics 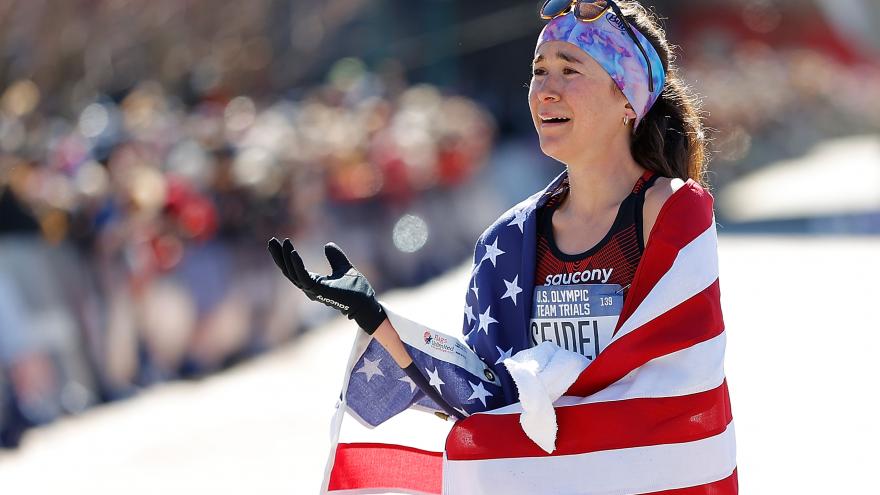 (CNN) -- American runner Molly Seidel surprised even herself over the weekend by coming in second at the Olympic marathon trials in Atlanta -- her debut race at the marathon distance -- and punching her ticket to the 2020 Summer Olympics in Tokyo.

The 25-year-old finished less than 10 seconds behind fellow American Aliphine Tuliamuk, with a time of 2 hours 27 minutes and 31 seconds. Another American, Sally Kipyego, finished third to round out the red, white and blue podium.

"You never really know what it's gonna be like until you get there," Seidel told Runner's World before the race. "It's going to be an unknown of what your body can do. Keep an open mind and know how much it's going to hurt, and be prepared for that amount of pain."

The former Notre Dame track and cross country star was once considered one of the top female distance runners to watch, according to Runner's World. She won NCAA championships in the 3,000, 5,000 and 10,000 meters but her career was sidelined by injury, depression and disordered eating.

"When you get to college, it's almost like this echo chamber where you see other women excelling in the sport with very low body weight," she said. "I think the collegiate structure of running is great, but in a lot of ways is super harmful and not necessarily the most positive environment for girls, especially as they're coming into their bodies as women."

She eventually went to a recovery program, and later reentered the world of competitive running with a few strong half marathon performances on the road to Atlanta, including winning the Rock 'n' Roll Half Marathon in San Antonio, Texas, in December 2019.

Seidel was considered a wild card going into the Olympic trials in Atlanta, but even she thought finishing in the "10th to 20th range would be a good day."

"I want to go out and be realistic, but not count myself out," she told Runner's World ahead of the event.

After her Olympic-qualifying finish, Seidel took to Instagram: "I can't put into words the happiness, gratitude, and sheer shock I'm feeling right now."