US roadway deaths rise at a record pace 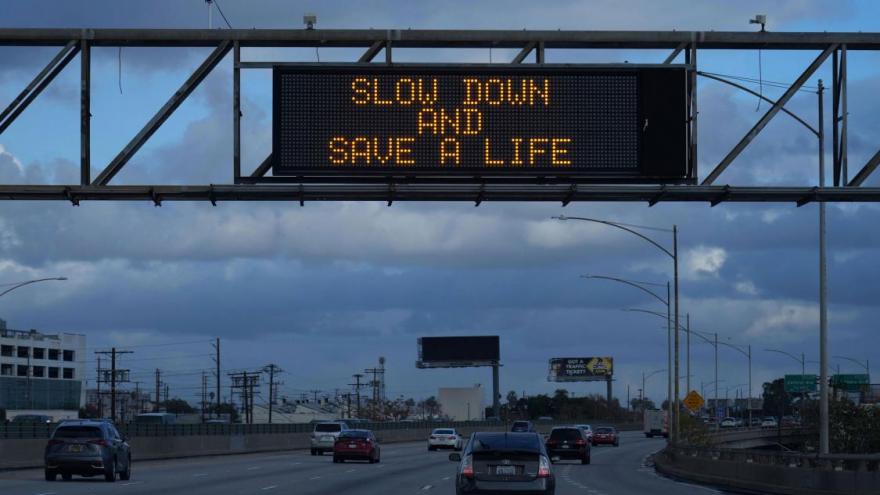 (CNN) -- The most dangerous way to travel in the United States became even more deadly during the coronavirus pandemic. Roadway deaths soared at the highest rate in recorded history.

Road safety advocates say the numbers match their experience along Maryland Route 210, a six-lane, largely straight stretch with busy business and residential intersections south of the nation's capital. It's called Indian Head Highway, but some call it "the highway of death," a nod to dozens of fatal accidents over the past decade.

"This is the riskiest thing that people do: Drive on these highways," Ron Weiss, a military veteran who advocates for reducing collisions on this roadway, told CNN. "I want to come home to my family. I want my kids to come home, my wife to come home safe."

Much of the road is marked with a speed limit of 55 mph, but Weiss says county speed cameras last year caught more than 12,000 vehicles hitting 70 mph or more. The highest recorded speed last year was 149 mph, according to his group, the Route 210 Traffic Safety Committee.

"It's a straight shot. It's a raceway," Weiss explained. "If you want to speed, this is the place to do it."

The most recent death on Indian Head Highway was about two weeks ago, when a rear-end collision caused two vehicles to burst into flame.

Nationwide, vehicle crashes killed an estimated 31,720 people in the first nine months of 2021, up 12% from the same period in 2020, according to the National Highway Traffic Safety Administration.

Deaths are the tip of the iceberg. NHTSA says there is one death for every 18 people hospitalized and every 400 injured in transportation incidents.

While driving declined early in the pandemic, risky decisions behind the wheel skyrocketed. Cars reached once-unlikely speeds as congested roads emptied of traffic. Many passengers declined to buckle up. An increasing number of drivers involved in crashes tested positive for opioids and other drugs. And AAA says an alarming number of drivers are admitting to typing or reading on their phones.

Now the number of miles Americans drive daily is on the increase again. Officials say the reckless trends continue.

"This is a national crisis," Transportation Secretary Pete Buttigieg said last week, announcing a multipronged plan to make roads, drivers and cars safer. "In a well-designed system, safety measures make sure that human fallibility does not lead to human fatalities."

National Transportation Safety Board Chairwoman Jennifer Homendy says the problem calls for policy changes. It is "devastating," she said, to meet with relatives of automobile crash victims and tell them officials had not acted on NTSB recommendations that might have saved a loved one's life.

"We have roads that are designed for efficient travel, not for safety," she said. "These are preventable crashes."

Among NTSB's highway safety recommendations that it considers the most important for government officials to act on are increasing enforcement and education campaigns; requiring vehicles to come with collision warning and automatic braking systems; and distracted driving policies that recognize even hands-free devices take a driver's attention away from the road.

"Our teens are driving the most unsafe vehicles -- the used cars, the ones without the new technology," Homendy said. "Auto manufacturers charge a premium for that technology."

The Rev. Robert Screen, who's also part of the Route 210 Traffic Safety Committee, sees the tragedies all too frequently on Indian Head Highway, which connects his home and ministry. He points out that road design changes will help, but can go only so far.

His group has worked to put more speed detection cameras on the roadside and advocates increasing the fines for violators. He wants to build a mindset where reckless drivers "remember the fines, where they remember the kind of punishment that goes along with it."

AAA supports legislation for Indian Head Highway that would increase the penalties for drivers accused of racing and allow police to impound their vehicles. The group's policy manager in Maryland, Ragina Ali, recently told state lawmakers that "speed kills and our roadways and parking lots are not racetracks."

Cynthia Jones wants more widespread use of ignition interlock devices to verify drivers are sober. She lost her sister Karen in a March 2000 crash to a drunk driver on Indian Head Highway. He slammed into her while she was fixing a loose gas cap.

"She would want me out here to make a difference in saving more lives," Jones said. "Because she didn't have to go that way."