US rescuers arrive to help in Mexico quake 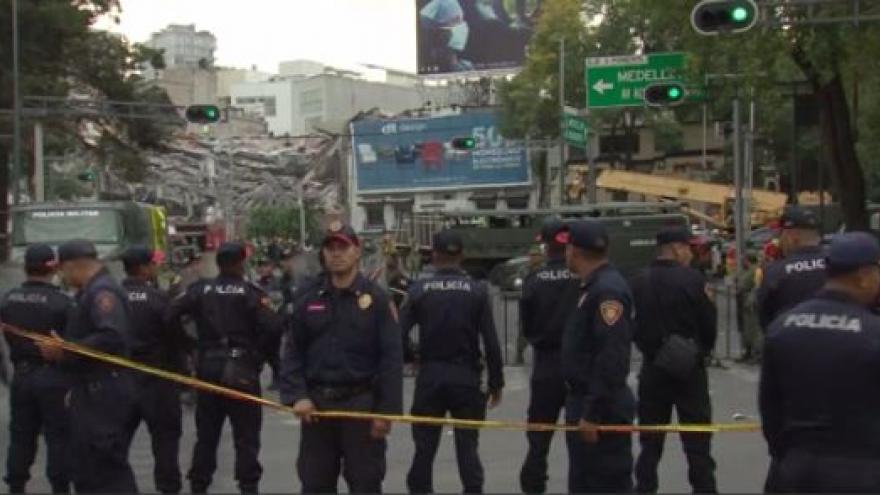 MEXICO CITY (AP) — The Latest on the major earthquake that struck Mexico (all times local):

Rescuers and search dogs from Southern California are in Mexico to help following the country's deadly earthquake.

The U.S. ambassador to Mexico says that a search and rescue team from the Los Angeles County Fire Department has arrived with "experts and tons of equipment."

Ambassador Roberta Jacobson on Thursday posted photos of rescuers and dogs next to a large U.S. Air Force jet and cargo being offloaded from the plane.

Tuesday's quake killed at least 245 people in Mexico City and nearby states, according to the latest official toll.

Vladimir Navarro has spent the night working at the site of a collapsed school in Mexico City where rescuers are still trying to free a trapped girl and any other survivors.

The university worker says he's exhausted and is going to sleep for a few hours and then return. Navarro says rescuers are "just meters away from getting to the children," but the rubble is unstable and they can't access it until it is shored up.

In his words: "Taking any decision is dangerous." Navarro says they need a large crane to come in and help. Tuesday's magnitude 7.1 earthquake collapsed the school and dozens of other buildings in Mexico City, and killed at least 245 people.

Rescue workers have recovered the body of a woman from the ruins of the school in southern Mexico City where a child has been detected alive.

The Mexican Navy issued a statement early Thursday saying the 58-year-old woman had worked at the Enrique Rebsamen school.

At least 26 people are known to have died at the primary and secondary school, which was one of scores of buildings across central Mexico that collapsed in Tuesday's magnitude 7.1 quake.

Both military and civilian rescue workers are trying to reach a child trapped in the rubble who has shown signs of life.

But they're not sure who she is. The navy statement appealed for information, saying no relatives have approached to offer any information about her.