US reopens embassy in Kyiv 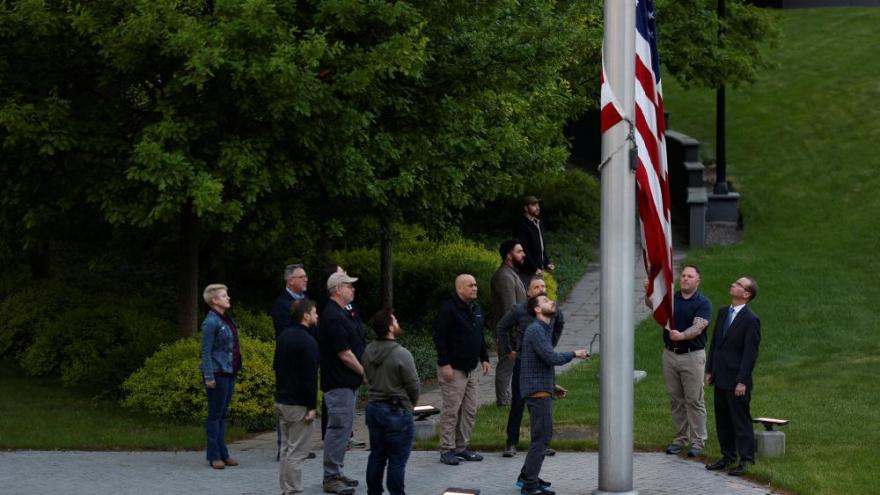 The US flag is raised for the first time after American diplomats returned to the US embassy in Kyiv, Ukraine.

(CNN) -- US Secretary of State Antony Blinken announced Wednesday that the US has reopened its embassy in Kyiv after it closed three months ago ahead of Russia's invasion of Ukraine.

"Today we are officially resuming operations at the U.S. Embassy in Kyiv. The Ukrainian people, with our security assistance, have defended their homeland in the face of Russia's unconscionable invasion, and, as a result, the Stars and Stripes are flying over the Embassy once again. We stand proudly with, and continue to support, the government and people of Ukraine as they defend their country from the Kremlin's brutal war of aggression," Blinken said in a statement.

Blinken reflected on the sustained US commitment to the Ukrainian government and the country's people.

"Three months ago, we lowered our flag over the U.S. Embassy in Kyiv, Ukraine, just days before Russian forces streamed across Ukraine's border to carry out President Putin's unprovoked, unjustified war of choice. When we suspended operations at the embassy, we made the point clear: while we would relocate U.S. embassy personnel for their safety and security, this would in no way prevent our engagement with, and support for, the Ukrainian people, government, and civil society as well as our allies and partners," Blinken said.

Blinken noted the administration had been working to reopen the embassy since its closure.

"We underscored our commitment to Ukraine's sovereignty and territorial integrity, pledged to continue our assistance, and started working toward the day we could return to Kyiv. Now, that day has come, " he added.

Ahead of Russia's invasion, the US and many other countries pulled diplomats and evacuated embassies and consulates from Kyiv to the western city of Lviv. The State Department moved its diplomats to Poland and suspended all diplomatic services in Lviv just before the invasion began.

Last month, after Russia shifted its aims in Ukraine away from Kyiv to focus on eastern Ukraine, Ukrainian President Volodymyr Zelensky urged countries to reestablish a diplomatic presence in Ukraine. Many other countries have already re-opened their embassies in Kyiv, and there have been calls for the US to follow suit.

In late April, during a visit to Kyiv, Blinken announced that the US would return diplomats to Ukraine, and they began making day trips into Lviv.

Acting US Ambassador to Ukraine Kristina Kvien and a group of US diplomats traveled to the US embassy last week for the first time since it was shuttered. Kvien remained in Kyiv ahead of Wednesday's re-opening of the embassy.

Blinken did not specify how many US diplomats would be operating out of the embassy. He noted that there are additional safety measures in place -- with "enhanced our security measures and protocols" -- to keep the returning US diplomats safe.

"We are committed to confronting the challenges ahead. The war rages on. Russia's forces inflict death and destruction on Ukrainian soil every day. Millions of Ukrainians are displaced from their homes and mourn the loss of their loved ones. With strength of purpose, we reaffirm our commitment to the people and government of Ukraine, and we look forward to carrying out our mission from the U.S. Embassy in Kyiv," Blinken said.