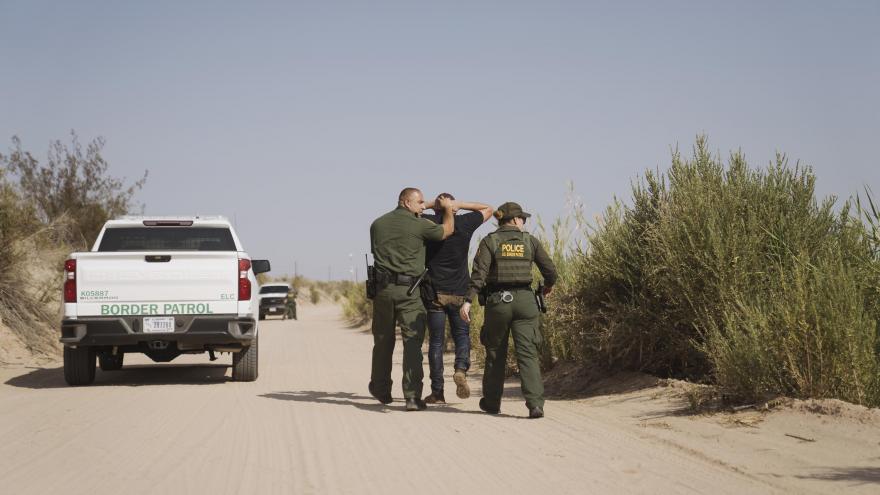 US Border Patrol made nearly 1.66 million arrests for unlawful crossings on the US-Mexico border over the past year, the highest annual number of apprehensions on record, according to year-end data released by the agency Friday.

(CNN) -- US Border Patrol made nearly 1.66 million arrests for unlawful crossings on the US-Mexico border over the past year, the highest annual number of apprehensions on record, according to year-end data released by the agency Friday.

In September, the border agency made 185,515 arrests, bringing the total to 1,659,206 during fiscal year 2021, which runs from October through September, data shows.

The previous record was 1.64 million border arrests in 2000, according to available southern border data dating back to 1960.

Since taking office, the Biden administration has struggled to manage the unprecedented number of migrants crossing into the US, faced early on with an influx of children that overwhelmed resources, and most recently, caught off guard by thousands of migrants arriving within days to the unprepared region of Del Rio, Texas.

The number of monthly border arrests -- a measure of unlawful crossings -- skyrocketed under the Biden administration, though they began to rise under former President Donald Trump.

Biden, when asked during CNN's town hall Thursday why he hasn't visited the southern border, said, "Well, I guess I should go down."

"I've been there before and I haven't, I mean, I know it well. I guess I should go down, but the whole point of it is, I haven't had a whole hell of a lot of time to get down," Biden added.

Biden drove by the US-Mexico border more than a decade ago, while on the campaign trail in 2008, White House press secretary Jen Psaki told reporters Friday.

The arrest numbers have ticked down since July, when Border Patrol arrests topped 200,000, a monthly level not seen in decades.

Since March 2020, Customs and Border Protection has been enforcing a public health order known as Title 42, allowing for the rapid expulsion of migrants, which has been linked to an increase in repeat crossers and elevated arrests.

"CBP encounters along the Southwest border declined in September from the prior month, and a majority of noncitizens encountered were expelled under Title 42," said CBP acting Commissioner Troy Miller in a statement, acknowledging the strain associated with operating during a global pandemic that has claimed "far too many lives" among CBP frontline personnel.

Immigration advocates and some lawmakers have criticized President Joe Biden for keeping in place the Trump-era pandemic policy, calling it a violation of human rights.

Biden's pick to lead US Customs and Border Protection, Chris Magnus, voiced support for the Trump-era public health order during his confirmation hearing earlier this week, telling lawmakers that as a paramedic for 10 years, "public health has always been one of my top concerns ... Title 42 is a CDC authority, and I think it helps with this."

Magnus, who currently serves as police chief in Tucson, Arizona, acknowledged the "significant challenges" at the border.

"The numbers are very high, and it is something that has to be addressed. Clearly, we have a broken system," he said Tuesday.

Most CBP seizures of hard narcotics also spiked last year, according to the end-of-year data, which included ports of entry and unlawful border crossings.

Fentanyl seizures more than doubled from 4,791 pounds in fiscal year 2020 to 11,201 pounds last year. Methamphetamine and cocaine seizures were also up. Heroine was down slightly.

International air travel dropped even further in fiscal year 2021 amid the ongoing Covid-19 pandemic, although CBP points out that it has begun to rise significantly in recent months.