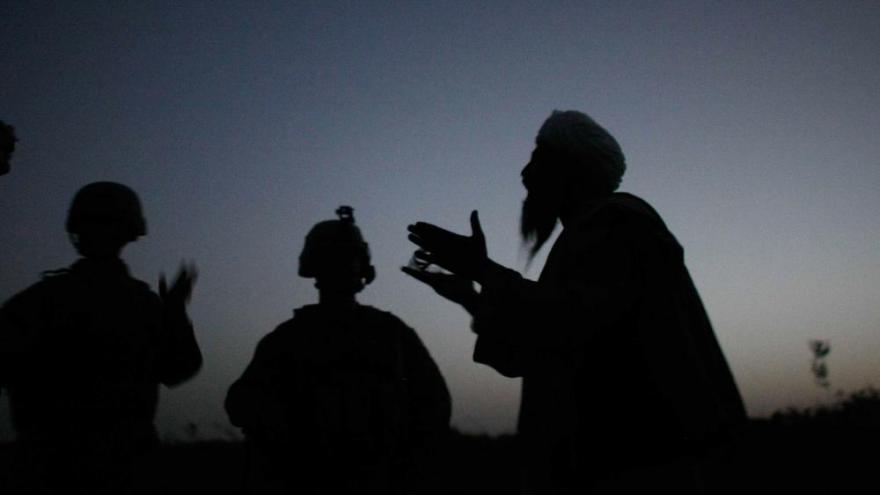 (CNN) -- With the US withdrawal from Afghanistan just days away, the Biden administration is asking countries in Central Asia to temporarily house thousands of Afghan interpreters and translators while they wait for visas to the United States, according to a US official and another source familiar with the discussions.

The US is in discussions with Tajikistan, Kazakhstan and Uzbekistan to take in some of the Afghans who worked alongside US troops and diplomats during the 20-year-long conflict and who may be at risk from the Taliban as the security situation in Afghanistan rapidly deteriorates, the sources said.

One administration goal is to spread the Afghans out across a number of countries so that no one nation has to take all 18,000 who are currently in the long process of getting a Special Immigrant Visa (SIV), according to a source familiar with ongoing discussions.

While the immediate focus will be on getting about 9,000 of the 18,000 applicants out of the country -- people in the final stages of the visa process -- the effort could extend to upwards of 50,000 people, as Afghans who applied for visas will be given the opportunity to bring family members, sources said.

Three months after President Joe Biden announced his plan to pull troops out by a September 11 deadline, the withdrawal is virtually complete. The speed of the US exit is raising concerns about whether the administration has planned carefully enough to protect the safety of Afghans who risked their lives to help the US, particularly as the Taliban gains control of wider swaths of the country.

"The good news is the administration is trying to find a solution because this is obviously a major problem and it's becoming more urgent as the security situation in Afghanistan deteriorates more quickly than people expected," said Lisa Curtis, a former National Security Council director for South and Central Asia who is now director of the Indo-Pacific Security Program at the Center for a New American Security.

Curtis, who is also a member of the non-profit foreign policy group the Vandenberg Coalition, adds that, "the SIV situation is indicative of the poor planning of the drawdown overall. It's been abrupt and a bit too sudden."

After detailing his drawdown plans, his hopes for the embattled civilian Afghan government and his view of US air support, Biden bristled at further questions about the state of Afghanistan on Friday. "I'm not going to answer any more questions about Afghanistan," Biden told reporters.

"Look, It's the Fourth of July," Biden said, gesturing in exasperation. "I'm concerned that you guys are asking me questions that I'll answer next week. This is a holiday weekend. I'm going to celebrate it. There's great things happening."

"We're bringing our troops home. All across America, people are going to ballgames and doing good things," Biden said.

News of talks with the Central Asian countries, first reported by Bloomberg, comes as a senior defense official told CNN Friday that the last US troops left Bagram Air Base on Friday. The departure marks the end of the American presence at the sprawling compound that became the center of military power in Afghanistan after the 9/11 attacks.

The State Department and the embassies of Tajikistan, Uzbekistan and Kazakhstan did not respond to requests for comment.

Administration officials and the President himself have said the Afghans will be taken care of, without offering details.

Biden vowed last week that the thousands of Afghan nationals who have worked alongside US diplomats and troops "are not going to be left behind" as his administration looks to relocate them while they wait for their visa applications to be approved. "We've already begun the process," Biden said at the White House. "They're welcome here just like anyone else who risked their lives to help us."

No One Left Behind, a group dedicated to helping Afghan interpreters get SIV visas, says that over 300 interpreters and their family members have already been killed by extremists because of their work with US troops and diplomats.

State Department spokesperson Ned Price said Thursday that the administration has "identified a group of SIV applicants who have served in these roles, as well as other individuals who have assisted us over the years and who may be at risk. They and their families will have the option to be relocated to a location outside of Afghanistan before we complete our military drawdown by September." Price added that the department is working with other agencies in the effort.

The White House committed to expediting visas for Afghans who worked closely with the US under the SIV program, but lawmakers in Congress have expressed frustration at the lack of communication about how exactly the administration will execute its plan.

The State Department has not said how many people will be offered the option of relocating to a third country while they wait for their visas to be processed, which countries have agreed to host them, if they have notified the Afghans of this option, or how the department is determining which visa applicants might be at risk.

"I continue to have significant concern about the safety and security of Afghans who served alongside our forces and other Afghans who are also facing increasing threats to their lives from extremist including those who worked for the US government, defense contractors, and International Security Assistance Force/Resolute Support Mission, as well as Afghans who worked for US-supported democracy, human rights, and civilian security programs," Sen. Robert Menendez, chairman of the Senate Foreign Relations Committee, recently wrote in a letter to Secretary Antony Blinken.

"The United States has a moral obligation to these Afghans and their families who face persecution and threats to their lives because of their support for Americans in Afghanistan," he said.

The foreign ministers of Uzbekistan and Tajikistan have been in Washington this week, meeting with Blinken and Defense Secretary Lloyd Austin to discuss Afghanistan.

"A lot of good and important work being done this week on the vital relationship between the United States and Uzbekistan," Blinken said Thursday as he met with foreign minister Abdulaziz Kamilov. "We have strong shared interests when it comes to security in the region, particularly with regard to Afghanistan."

Congress has not been briefed on plans to send Afghan visa applicants to those three countries, congressional aides told CNN Friday morning, despite massive bipartisan pressure to ensure the protection of the thousands of Afghans who assisted the US during its nearly two decades of military involvement.

Within Capitol Hill committees that oversee military and foreign policy issues, there is frustration that the administration is not sharing more information about its plans to help Afghan interpreters and translators.

Lawmakers have next to no information about the administration's plans, Senate and House aides say. They are seeking answers from the administration to a slew of questions, including how much planning has been done for possible evacuations, what administration officials have been charged with overseeing that work, what countries they could be sent to while their visas are processed, how those countries were chosen, and what the State Department's role is.

"We're eagerly awaiting some information," said one congressional aide. "The notion that there's a September deadline to get these people out is meaningless, because once our folks are out, those people are sitting ducks."

No One Left Behind applauded the reports of the discussions with Kazakhstan, Uzbekistan and Tajikistan, but other advocates who had been advocating for the administration to relocate the SIV applicants to Guam expressed questions and concern.

Krish O'Mara Vignarajah, the president and CEO of Lutheran Immigration and Refugee Service, told CNN that she has "more questions than answers" following the reports of the talks, noting it is unclear where the applicants would live, whether there is infrastructure to support the thousands of temporary residents, and how their safety will be ensured. She noted that her organization has yet to hear an official, concrete, actionable plan to protect the Afghans.

Matt Zeller, a US veteran who served in Afghanistan and a fellow at the Truman Center for National Security, said on Twitter Friday that the developments are "a profound disappointment & a complete abdication of our responsibility."

"@POTUS has completely failed if this comes to pass. Prediction: many of these Afghans will languish for years in refugee camps only to be eventually deported back to Afghanistan," he wrote.

"Make no mistake, outsourcing our problem to Kazakhstan, Uzbekistan and Tajikistan is the worst possible choice for the administration," Chris Purdy, director of Veterans for American Ideals at Human Rights First, said in a statement. "Not only is it an abdication of our responsibility to allies who risked their lives for American forces, but it also unnecessarily sets up a potential continuing human rights disaster for people who have already endured years of persecution and threats of violence for their service to the United States."