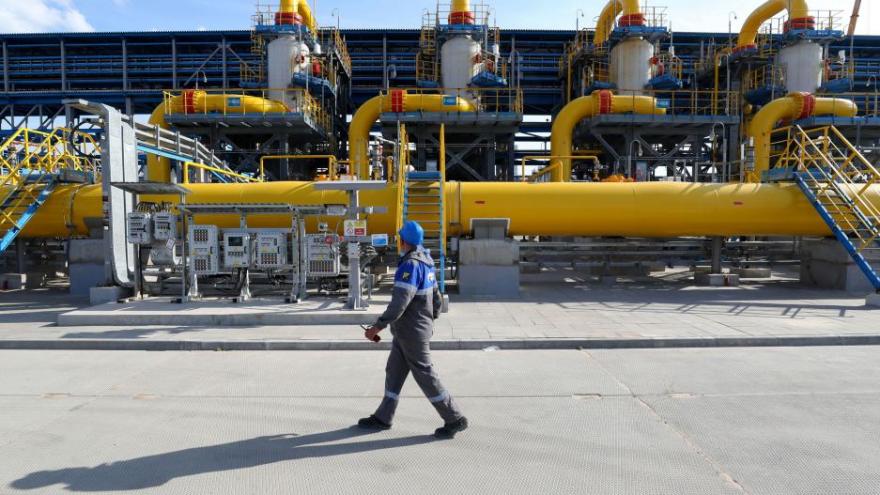 A worker walks in a gas treatment unit at the Slavyanskaya compressor station, operated by Gazprom.

(CNN) -- The Biden administration has been in regular discussions with a number of countries and companies in Europe, the Middle East, North Africa and Asia about stepping up production of liquefied natural gas to Europe in the event that a Russian invasion of Ukraine leads to gas shortages, multiple US officials familiar with the discussions told CNN.

The State Department, led by Senior Adviser for Energy Security Amos Hochstein, has in the last six to eight weeks been putting together a global strategy exploring contingency options to redirect and increase gas supplies from different parts of the world, a senior US official said.

The countries engaging in the talks include Norway and Qatar, the official said, but the US' outreach has been "truly global" as Washington and allies determine what supplies will be needed to get through the winter and spring if there are gas shortages.

The discussions are in a "fairly advanced" stage, according to the senior US official, and have been aimed at reassuring nervous European allies that levying sanctions on Russia in coordination with the US will not result in an outsized blowback on the European economy. European allies have been particularly concerned about the potential for Russia to weaponize its gas exports to Europe to retaliate against Western sanctions.

The conversations have been happening amid warnings from the US that Russia has reached the stage in its military build-up where it could launch an attack on Ukraine "at any point," as White House press secretary Jen Psaki told reporters last week.

Russia currently provides Europe with more than 40% of its natural gas supply, according to Eurostat. In exigent circumstances, officials said, Europe has a storage of liquefied natural gas that it could tap into, and European officials have been exploring how much of a buffer that could provide.

"We are well aware of the potential impact of a reduction of Russian energy supply, both in Europe's market and globally, and we are working very hard to identify and manage those risks with a range of contingency options," a senior administration official said earlier this month.

As CNN has previously reported, a war between Russia and Ukraine would likely significantly roil global energy markets, since Russia is the No. 2 oil producer in the world, behind only the United States. Russia also exports a large amount of natural gas to Europe through Ukraine -- exports that would likely be severely disrupted by a war and damage to critical energy infrastructure.

"A war would have a major impact on oil prices and make inflation worse," the senior US official said, which is why the US has been working intensively over the last two months to try to offset any potential collateral damage that a war, and/or severe sanctions, could inflict on the global economy.

"Whatever we decide, in concert with our allies and partners, is the right course for our collective interests and security, we are prepared to deliver severe costs to the Russian economy while minimizing unwanted spillover," another senior administration official told CNN earlier this month.