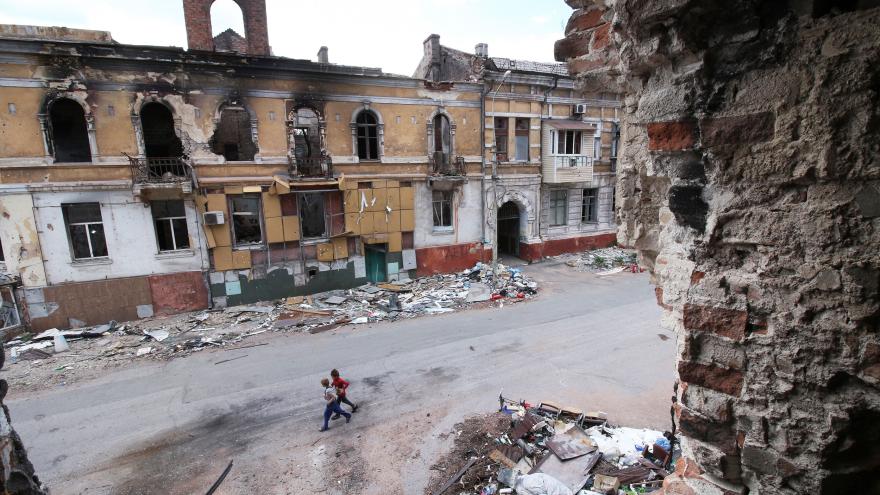 (CNN) -- The Biden administration is preparing to step up the kind of weaponry it is offering Ukraine by sending advanced, long-range rocket systems that are now the top request from Ukrainian officials, multiple officials say.

The administration is leaning toward sending the systems as part of a larger package of military and security assistance to Ukraine, which could be announced as soon as next week.

Senior Ukrainian officials, including President Volodymyr Zelensky, have pleaded in recent weeks for the US and its allies to provide the Multiple Launch Rocket System, or MLRS. The US-made weapon systems can fire a barrage of rockets hundreds of kilometers — much farther than any of the systems Ukraine already has — which the Ukrainians argue could be a gamechanger in their war against Russia.

Another system Ukraine has asked for is the High Mobility Artillery Rocket System, known as HIMARS, a lighter wheeled system capable of firing many of the same types of ammunition as MLRS.

Russia has in recent weeks pummeled Ukraine in the east, where Ukraine is outmanned and outgunned, Ukrainian officials have said.

The Biden administration waivered for weeks, however, on whether to send the systems, amid concerns raised within the National Security Council that Ukraine could use the new weapons to carry out offensive attacks inside Russia, officials said.

On Friday, after CNN first reported the news, Russians warned that the United States will "cross a red line" if it supplies the systems to Ukraine.

"The US intends to discuss the issue of supplying Ukraine with these weapons as soon as next week," Olga Skabeeva, a prominent Russian TV host, said on her high-profile show on the state network Rossiya-1. "At the present moment, the issue is being addressed by the US presidential administration. So now, we are not even talking about tactical weapons anymore, but about the operational-tactical weapons."

She continued: "The US MLRS can launch shells over 500 kilometers. And if the Americans do this, they will clearly cross a red line, and we will record an attempt to provoke a very harsh response from Russia."

While Skabeeva does not speak for the Kremlin, her views frequently reflect official thinking.

Republican Sen. Lindsey Graham of South Carolina responded to CNN's reporting on Twitter Friday, saying he was frustrated the Biden administration has been "dragging their feet" on giving Ukraine the rocket systems.

On Friday, the Pentagon's outgoing press secretary John Kirby suggested a final decision on the MLRS hadn't been reached yet. "Certainly we're mindful and aware of Ukrainian asks, privately and publicly, for what is known as a multiple launch rocket system. And I won't get ahead of decisions that haven't been made yet," Kirby told reporters during a briefing.

The issue of whether to supply the rocket systems was at the top of the agenda at last week's two meetings at the White House where deputy Cabinet members convened to discuss national security policy, officials said. At the heart of the matter was the same concern the administration has grappled with since the start of the war-- whether sending increasingly heavy weaponry to Ukraine will be viewed by Russia as a provocation that could trigger some kind of retaliation against the US.

One major hang-up, the sources said, had been the rocket systems' extensive range. The MLRS and its lighter-weight version, the HIMARS, can launch as far as 300km, or 186 miles, depending on the type of munition. They are fired from a mobile vehicle at land-based targets, which would allow the Ukrainians to more easily strike targets inside Russia.

Ukraine is already believed to have carried out numerous cross-border strikes inside Russia, which Ukrainian officials neither confirm nor deny. Russian officials have said publicly that any threat to their homeland would constitute a major escalation and have said that western countries are making themselves a legitimate target in the war by continuing to arm the Ukrainians.

Another major concern inside the Biden administration had been whether the US could afford to give away so many high-end weapons drawn from the military's stockpiles, the sources said.

Asked on Monday whether the US would provide the systems, Secretary of Defense Lloyd Austin demurred. "I don't want to get ahead of where we are in the process of resourcing requirements," he told reporters.

The administration had similar concerns about providing Ukraine with additional MiG-29 fighter jets, which some worried could allow the Ukrainians to take the fight into Russia. Ultimately, the US decided against backfilling Poland with new jets, which would have allowed the Poles to equip Ukraine with the soviet-era MiGs.

The debate about the MLRS is also similar to one that played out before the US decided to begin sending heavier, long-range Howitzers, to Ukraine last month. Weapons packages focused on anti-tank Javelin and short-range Stinger anti-aircraft missiles, as well as small arms and ammunition. At the time, the M777 Howitzers marked a significant increase in range and power over previous systems, but even those top out at around 25 kilometers or 18 miles in range. The MLRS can fire much further still than any of the artillery the US has sent to date.

One workaround could be to provide Ukraine with shorter-range rocket systems, officials said, which is also under consideration. It would not take too long to train the Ukrainians on any of the rocket launcher systems, officials told CNN — likely about two weeks, they said.

Every drawdown from existing inventories involves a review of its potential effect on US military readiness. With the previous drawdowns, the risk has been "relatively low," said Joint Chiefs Chairman Gen. Mark Milley on Monday. The military is watching "very, very carefully" to make sure the stockpiles don't drop below levels that create a greater risk, he added.

The concern grows significantly with more capable, more expensive systems of which the US does not have as large a supply, the sources said.

Pentagon officials met with the CEO of Lockheed Martin last week to discuss supply and ramping up production of the MLRS, one source familiar with the meeting told CNN. The meeting was led by the Under Secretary of Defense for Acquisition and Sustainment Bill LaPlante.

The UK is also still deciding whether to send the systems, two officials told CNN, and would like to do so in conjunction with the US.

Frustration has grown on the Ukrainian side with the US' indecisiveness in recent weeks, because they believe that once the US sends the systems then other countries will quickly follow suit.

As recently as this week, the Pentagon had told Ukraine "we are working on it," said one irritated Ukrainian official, who added that Ukraine is asking for an update on the decision "every hour."

"We are in great need of weapons that will make it possible to engage the enemy over a long distance," Ukraine's top military commander, General Valeriy Zaluzhnyi, said Thursday. "And this cannot be delayed, because the price of delay is measured by the lives of people who have protected the world from [Russian fascism]."

When Ukrainian Foreign Minister Dmytro Kuleba was asked Thursday what his country's most urgent needs are, he responded: "If you really care for Ukraine, weapons, weapons and weapons again."

"My least favorite phrase is 'We are working on it'; I hate it. I want to hear either 'We got it' or 'It's not going to happen,'" he added.

Democratic Rep. Jason Crow of Colorado, who was part of a congressional delegation trip to Kyiv earlier this month, told CNN he believes the systems could help Ukraine gain significant momentum against Russia.

"I think it could be a gamechanger, to be honest with you," Crow said, not only for offensive attacks but also for defense. He explained that Russian conventional artillery, which has a range of about 50km, "would not get close" to Ukrainian urban centers if MLRS systems were positioned there. "So it would take away their siege tactics," he said of the Russians.

This story has been updated with comments from Pentagon spokesperson John Kirby, as well as a Russian TV host on Friday warning the US would cross a red line by sending Ukraine the MLRS, and a tweet from Republican Sen. Lindsey Graham, who criticized the Biden Administration for delaying approval of the weapons