US Postal Service warns Congress it could become insolvent amid coronavirus 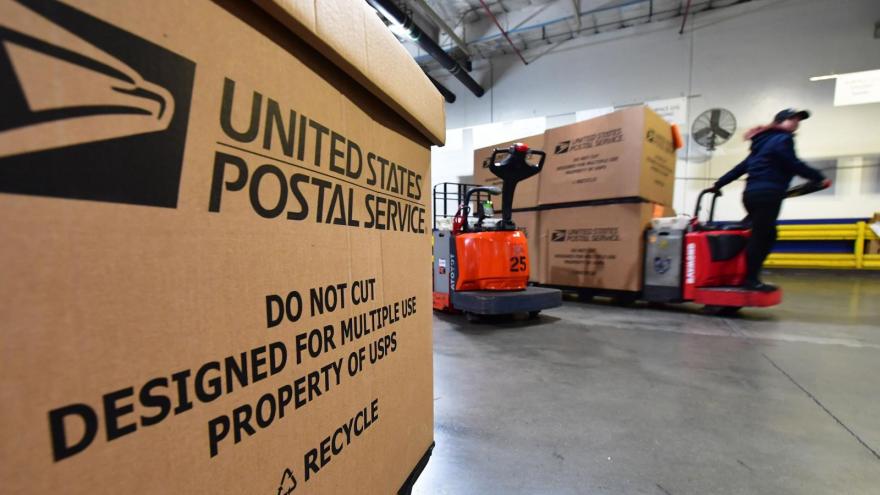 The US Postal Service is giving Congress a dire warning, telling lawmakers in a video briefing this week that the agency will "run out of cash" by the end of September if Congress does not step in with financial assistance. Credit: Frederic J. Brown/AFP/Getty Imag

(CNN) -- The US Postal Service is giving Congress a dire warning, telling lawmakers in a video briefing this week that the agency will "run out of cash" by the end of September if Congress does not step in with financial assistance.

According to Democrats on the House Oversight Committee, Postmaster General Megan Brennan warned lawmakers Thursday that in light of the global pandemic, the Postal Service believes they will see a "$13 billion revenue loss" this year with projections that coronavirus could cost the agency another $54 billion over the next decade.

"The Postal Service was technically insolvent to begin with, but the pandemic has completely changed the environment here. The mail volume drop is catastrophic," said Rep. Gerry Connolly, a Virginia Democrat and the chairman of the oversight subcommittee that oversees the USPS.

The threat to the US mail system caused by coronavirus and the resulting economic downturn has prompted the Postal Service to ask Congress for a $75 billion boost to help keep it afloat as hundreds of thousands of mail carriers and postal workers continue working during the pandemic. House Democrats say the postal service is asking for $25 billion in direct funding, another $25 billion in "unrestricted borrowing authority from Treasury" and $25 billion in grants to help "modernize" the post office.

President Donald Trump has brushed questions aside about a major cash infusion for the Postal Service, having long blamed the economic woes on companies like Amazon.

"They have to raise the prices to these companies that walk in and drop thousands of packages on the floor of the Post Office and say, 'Deliver it,'" Trump said at a press briefing this week. "And if they'd raise the prices by actually a lot, then you'd find out that the Post Office could make money or break even. But they don't do that. And I'm trying to figure out why."

Sources involved in the negotiations told CNN that the Trump administration rejected any direct funding for USPS when Democrats sought to include $25 billion for the Postal Service during the talks. Instead, the Postal Service received a promise it could apply for $10 billion in loans with the Treasury Department, but the loans came with strings attached that Democrats argue further burden the agency.

"The Postal Service is holding on for dear life, and unless Congress and the White House provide meaningful relief in the next stimulus bill, the Postal Service could cease to exist," Rep. Carolyn Maloney, the chairwoman of the House Oversight Committee said in a statement.

The US Postal Service, unlike private mail carriers, is required to deliver goods to every corner of the country including rural communities where the profit margins are slim. Without it, Democrats warn some vulnerable populations wouldn't be able to get prescriptions or essential goods, which have become crucial during the escalation of coronavirus.

Postal workers are among those — like medical professionals, first responders and grocers — who have expressed alarm about keeping an adequate supply of protective medical gear such as face masks, gloves and hand sanitizer as they work during the pandemic.

The financial struggles of the Postal Service are not new, but the emergence of the global pandemic has further strained the mail service. Connolly told CNN that he learned this week the decline in mail volume had accelerated. Four weeks ago, Connolly said USPS mail volume had declined 5.3%. Last week, it declined by 30%, and the Postal Service estimated it could drop as much as 50% in the third quarter of this year.

While package volume has increased, packages make up less than 30% of total revenue for USPS.

"As Congress and the Administration take steps to support businesses and industries around the country, it is imperative that they also take action to shore up the finances of the Postal Service, and enable us to continue to fulfill our indispensable role during the pandemic, and to play an effective role in the nation's economic recovery," Brennan said in a statement.

"We are at a critical juncture in the life of the Postal Service," she added. "At a time when America needs the Postal Service more than ever, the reason we are so needed is having a devastating effect on our business."